The never-ending stalemate of frozen Yuan ended a few years back and it has been swinging to either side only marginally, as allowed by the Chinese Government. The intention then was to maintain an artificial barrier against appreciation of Yuan, which successfully reined in the fluctuations that would have been otherwise occurred. The things now seem to be changing.

China's currency is facing strong downward pressure this year as the country's once surging growth rates slow amid a stalling global economy and signs of capital flight after years of inflows. It is a new development for the Yuan, once on a steady upward trajectory on the back of expectations that China's impressive economic strength made the currency a one-way bet. The economy, though, has slowed for six straight quarters and the 7.6 percent year-on-year expansion in gross domestic product for the three months ended June 30 was the worst since the 2008-2009 global financial crisis. The Yuan has dropped just one percent this year, but the fall has come after years of gains amid foreign pressure by China's trading partners, especially the United States, who claimed it was undervalued. 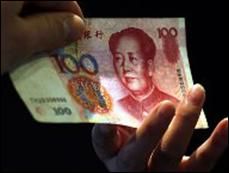 The China Securities Journal, a state newspaper, carried a front-page commentary this month saying markets have now accepted that the currency is on a weakening track, calling that a potential boon for the economy. A weaker Yuan could spur positive effects such as boosting exports, it added. Broader trends are also pressuring the Yuan as the dollar has started to strengthen this year against other Asian currencies, said Bill Belchere, chief, emerging markets economist at Mirae Asset Securities in Hong Kong. Analysts say that the decline so far in the Yuan, also known as the Renminbi, would be far larger if authorities were not providing a floor by selling some of China's trove of $3 trillion in foreign reserves. "If it were freely traded today, the RMB would be 10 percent below where it is," said Shanghai-based independent economist Andy Xie. "That's what the real economy is trying to get." Xie added, however, that authorities cannot let that happen as they are dealing with a serious property slump which, if mishandled, could lead to a loss of confidence. "If the currency drops significantly, the property market will collapse," he said. "They are trying to achieve some sort of soft landing."

The dollar traded last at about 6.36 Yuan. Though the Chinese currency is down one percent since the start of the year, it has risen about 30 percent over the past seven years.

China has taken a series of steps since July 2005 to loosen its grip on the Yuan, but it remains highly controlled compared to the dollar, euro and yen, that float freely. The People's Bank of China, the Central bank, has since April set a daily central parity rate from which the Yuan can only trade one percent up or down, though that is a doubling from the previous 0.5 percent band.

Another reason economists cite for the Yuan's atypically bearish 2012 also includes capital outflows, evidenced by China in the second quarter recording its first capital account deficit since 1998. Wang Qinwei, China economist for Capital Economics cites a surge in foreign currency deposits in China, which on the books are classified as an outflow, as likely pressuring the central bank to sell reserves.

"Fears about capital leaving China are overdone," he wrote in a report, adding that "firms are in less of a hurry to exchange foreign currency receipts into renminbi now that expectations for renminbi appreciation have fizzled out". The State Administration of Foreign Exchange said in a report in March that "expectations on the Yuan's unilateral appreciation have been broken", citing volatility in global markets from late last year.

"The weakening of the Chinese Yuan indicates that the currency now fluctuates on both sides and suggests it has become more flexible, which is good for the Chinese economy," Juzhong Zhuang, Deputy Chief Economist at the Asian Development Bank in Manila, said. Longer term, economists say the Yuan's prospects for a return to strengthening mode depend on recovery in the broader global economy and the government carrying out structural reforms.

Last month, the International Monetary Fund said the Yuan was now more closely aligned with China's overall economy, yet remained "moderately undervalued". A stronger currency would increase household purchasing power and facilitate reform of the financial sector, among other positives, the IMF said in a report. "Currency appreciation continues to be an important component of the package of reforms needed to transform China's economy," it said.

This article was originally published in The Stitch Times magazine, September, 2012.