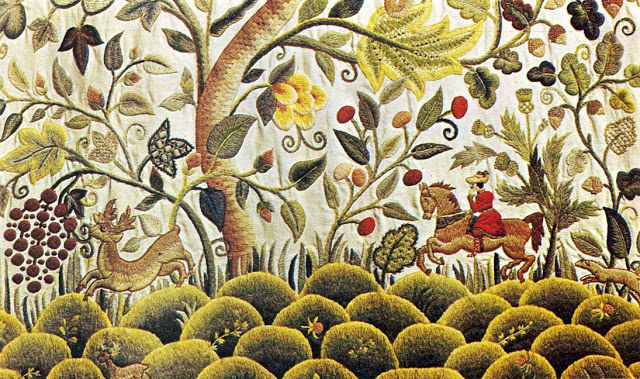 Crewelwork,or perhaps a more technically accurate phrase would be crewel embroidery, is adistinct technique of embroidery that has a long history in Europe, and inEngland can trace its history back to the construction of the Bayeux tapestryand beyond.

Althoughcrewelwork often used outlined compositional aids in order to guide thestitching, it could equally be constructed without any guides, or only basicand roughly drawn guides, allowing the crewel worker an element of creativefreedom, adding details as they progressed.

Crewelembroidery was usually produced using wool rather than cotton or silk, whichseparates it from the main embroidery medium, though this does not make itunique. Even though the woollen yarn used was fine in comparison to generalwool yarn use, the wool still gave a much thicker stitch producing a raisedaspect to the finished embroidery, which gave it its unique style. However,because of the thickness of the yarn an embroidery hoop or frame was needed inorder to maintain an even tension so that the yarn did not distort the basefabric.

Probably the best examples of English crewelwork were that produced during the Jacobean period, the first part of the seventeenth century. Some examples are luckily still with us. They give us an insight into the high quality and standard that was regularly achieved by the women who produced these historical gems of embroidery. It is a tribute to them that we still admire these Jacobean crewel work pieces four hundred years after they were first produced.

Much of the crewelwork was created for domestic settings. Bedroom furnishings were particularly popular and most large country houses had crewelwork bed hangings and covers that were being used generations after their creation. Crewelwork was also used to a certain extent in clothing, with crewel-embroidered jackets being popular for both sexes at the beginning of the seventeenth century.

English crewelwork had at its root the decorative theme of the natural world of flora and fauna. Much of the work consisted of stylised flowers, leaves and trees. These could take the form of landscapes, with forest hunting scenes being particularly popular. However, some of the decorative work was much more complex and intertwined, using highly stylised flowers and leaves, giving a rich and detailed surface to the fabric.

This form of Jacobean crewelwork became inspirational to many who used embroidery within the nineteenth century Arts & Crafts movement. William Morris and his daughter May produced an element of their embroidered, printed and woven textile work that used this traditional and highly stylised English decorative art as its inspiration. It was its distinctive rural Englishness that seemed to appeal to the Morris's and the Arts & Crafts movement in general. The love of the English natural world was a magnet to the creative craft makers of the later nineteenth century. The high standards of hand production achieved by English Jacobean crewelwork deeply impressed them and the combination of the two meant that this form of crewelwork featured across the English Arts & Crafts movement for much of life of the movement.

By:
John Hopper
Published: Oct 2012
Reuse this Content
Our Clientele