FDI in Retail: is India for sale?

FDI agreement promises milk and honey into the country. How had been the performance during the past decade, and what are the possible consequences of the latest policy? 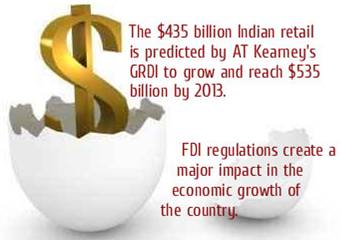 Indian retail sector has been the under major policy debates. The core focus of these debates is the Governments decision to permit Foreign Direct Investments. Economic policymakers come up with unique strategies to attract Foreign Direct Investments (FDI). They believe that high level of FDI inflows provide an affirmation that economic policies are being well implemented, and promises of the future economic development of a country. India too; has initiated FDI policies to attract foreign currencies.

Influx of the foreign currency is believed to restrict Indias account deficit, and boost the Indian rupee against the U.S. dollar. AT Kearneys 2012 ranking states India as the fifth attractive retail destination. The $435 billion Indian retail is predicted by AT Kearneys GRDI to grow and reach $535 billion by 2013. With a GDP growth of 6-7%, dual income, and rapid urbanization fuel its growth. FDI regulations create a major impact in the economic growth of the country.