Indian womenswear has gone through a transformational phase during the past decade. Increasing number of working women, independence in deciding financial matters, media exposure, and awareness of current trends give a new dimension to the segment. Womenswear includes both intimate wear and outerwear. Main categories are suits and coats, T-shirts, jumpers, tops, jackets, skirts, blouses, sweaters, and sweatshirts. Ethnic Indian wears like salwar suits also add to it. As the number of working women increase, market for fusion wear and western wear are likely to grow simultaneously. In 2009, Indian womenswear generated a revenue of $10.2 billion with a CAGR of 11.6%.

Competitive analysis of the Womenswear market:

An RNCOS research states that ethnic womenswear comprising of sarees, salwar kameez, and kurthis is a fast growing segment in the Indian arena. During 2011, market for womens ethnic wear was `363 billion and is further predicted by industry experts to grow by 10% by 2015. Additionally, western influence among the young segment has motivated manufacturers to combine traditional patterns with modern styles. 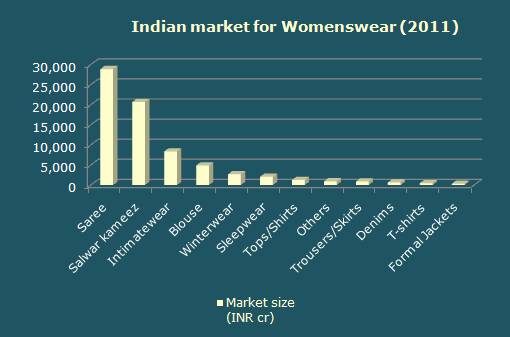 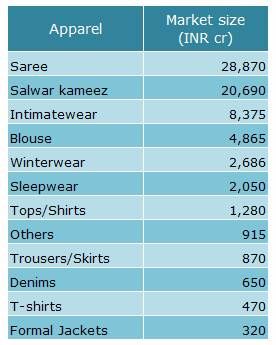 The industry is highly fragmented, competitive, and much influenced by the every changing tastes and preferences of the consumer. Urbanization, increasing amount of disposable income, increasing brand consciousness and many other factors has propelled the growth of womenswear market. Major players in the market include Povogue, Pantaloon, Page Industries, and Donna Karan etc. Many major mens brands have now started to enter into the womenswear segment, exploiting the highly lucrative segment. 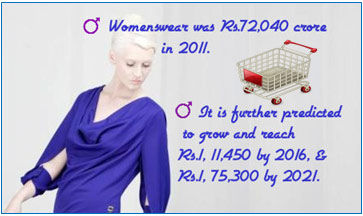 Womenswear is more complicated comparatively over menswear, its trends capricious, and keep changing swiftly whereas mens fashion tends to transform slowly with predictable changes. Ethinic salwar kameez is the wardrobe staple for Indian women, with the fashion designers having a major chunk of their collections. Though tailored suits comprise a larger share of this segment, retailers are now offering standardized sizes in an attempt to widen their market.

Market for womens clothing in the age group of 35+ is fast developing into a lucrative segment. Retailers, especially those who are vertically integrated are cashing in on the new phenomenon, and are working hard to cater to the market for this segment of high profitability. Emergence of casual dressing as an official lifestyle trend is picking up at a phenomenal rate. More companies are accepting the trend of casual dressing at workplace increasing the sale of casual shirts. The trend of Friday Dressing has increased the market for T shirts. 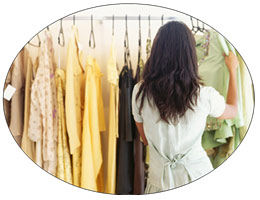 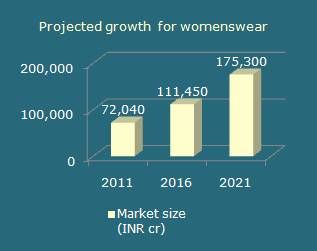 A Technopak study states that Indian market for womenswear was `72,040 crore in 2011. It further predicts the market to grow and reach `1, 11,450 by 2016, and `1, 75,300 by 2021. Exposure to international trends, awareness created by media, internet, and availability of foreign brands in the Indian market has created an evolution in the segment. Global brands with deep pockets have been entering into the country since then. Inception of a cosmopolitan culture has led the Indian women to go for global silhouettes.

Indian womenswear market which is estimated to be around rs. 540 billion will grow drastically with a CAGR of more than 11% during the period 2012-15. Indian womenswear market has been experiencing a remarkable growth. Industry veterans assert that more 20% of the women force will be joining the working population in the coming years.

Organized retail stores are gaining importance, and new malls are coming up, fuelling the existing market for womenswear. With more and more women coming out of their shell, and participating in a challenging work environment, Indian market for womenswear is likely to experience robust growth in the coming years, with every retailer striving to have their slice of the pie.