Icelandic Christian based and themed embroidery started with the conversion of Iceland in 1000 to the start of the Protestant Reformation church in 1550. Icelandic religious embroideries were used throughout the numerous Catholic Church services and came in the form of altar cloths, chalice veils and a range of other church furnishings. 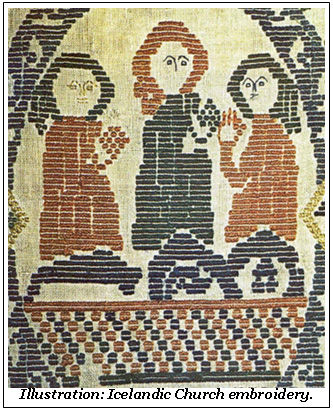 Interestingly much of the work produced for the church was not as extravagant and expensive as some of the more flamboyant and wealthy areas of Europe. Icelandic embroidery tended to be limited to woolen items both for the threads and the background. The wool would all have been sourced locally and would have been the dominant resource on an island that was never at the heart of the greater European culture and was by no means its wealthiest part, financially or naturally. On occasion, linen and silk were used, but as these materials always had to be imported, they were rarely used.

Icelanders used materials that were immediately available on their limited island, it is the emphasis on the ordinary and the everyday, rather than that of the expensive, expansive and extravagant that places these church furnishings within a range of egalitarian textiles that are usually associated with domestic use, rather than that of ceremony. In fact, after the Protestant Reformation, much of the labour expended on embroidery was diverted to domestic use, such as wall hangings and blankets.

Simply click on the top left of the extension and register to get access to 10 shortcuts. Your email will remain secure, but we might get in touch for your feedback!

During the five hundred years of the Catholic Church in Iceland, church embroideries were almost exclusively the only embroideries produced on the island. All embroidery production was maintained and controlled by a select group of professional women who were in charge of all aspects of the craft. How these women faired after the Reformation when their custom was no longer needed in such volume by the reformed church, is unknown. Whether they maintained their rare professional status is also unknown. 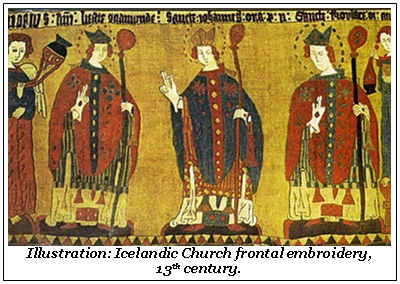 It is thought that many of the compositions for the religious embroideries derived from outside the Icelandic community and may well have had their origin within medieval manuscripts from northern Europe or even the much more ornate and involved styling originating in Byzantium.

Icelandic Christian embroideries are an interesting example of a local culture playing a subservient role to that of a larger and more dominating culture, the Catholic Church. However, even when given the template of acceptable compositions and styling, it is interesting to see how local colour and character, even if only in the interpretation of materials and colours used, can flavour the dominating culture, making it more palatable, approachable and relevant to the local population. 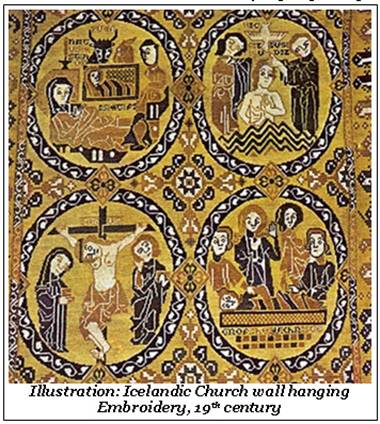 By using the available resource of their island, namely wool, rather than that of expensively imported silks and other materials, Icelanders were underlining their pride in their broadly egalitarian society. Despite the fact that embroidery was to be used for important and grandiose theatrical ceremonies within the church, the embroideries were not to upstage or belittle the culture that produced them. The craft of the island created the church furnishings and therefore those same furnishings should reflect and be a part of that culture, rather than seem to be imposed from outside by the use of fabrics and threads that were not locally derived and therefore foreign and alien to the local community.

This article was originally published in the 'Design, Decoration, Craft' blog.

By:
John Hopper
Published: Dec 2012
Reuse this Content
Our Clientele