Indian petrochemical industry has strategic growth potential, but is also affected by adverse policies. What is the industry outlook for 2013?

Indian economy has witnessed a 3% decline during 2011-12. The countrys economy is going through a difficult phase. Growth has seen a steep decline due to adverse fiscal policies, and environment. Inflation was high as measured by the Wholesale Price Index (WPI) throughout the fiscal year.

Petrochemicals include synthetic fibres, polymers, synthetic detergents, elastomers, and performance plastics. Main source of feedstock and fuel for petrochemicals are natural gas and naphtha. These products are involved in day to day life such as clothing, automobiles, packaging, and medical appliances. Demand for these products influence polymer consumption. 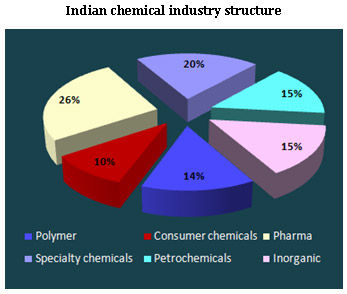 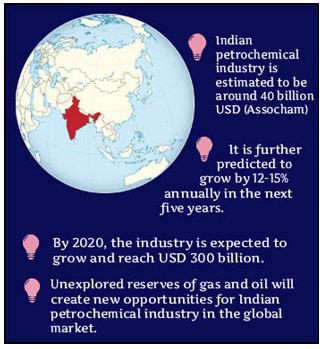 Indias petrol refining capacity is more than 194 million tones p.a. The worlds largest grass root refinery is located in India. Petrochemical industry is one of the fastest growing industries in the nation. During 2010-11, the industry experienced growth of 11%. An Assocham reports estimates the industry to be around 40 billion USD, and further predicts it to grow by 12-15% annually in the next five years. By 2020, the industry is expected to grow and reach USD 300 billion.

Indian market for polymers witnessed a sluggish demand in 2011, as economy slowed down due to monetary and fiscal tightening to control inflation. Demand is positively anticipated to pick up during 2013. Polyolefin comprised of 79% of the total polymer capacity and production during 2011. It registered a demand growth of 4.1% during 2011, and is expected to grow 7% in 2013. PVC demand increased by 5.1% in 2011, and is expected to witness robust demand and grow by 10% during 2013. Polystyrene demand increased by 12% and is expected to maintain a similar trend during 2013 as well. Production of Ethylene & Propylene had a moderate increase and is predicted to improve further along with the improvement in operating rates.

Predicaments of the Industry:

There are some concerns affect the performance of the Indian petrochemical industry. India is one of the major importers of petroleum and crude oil products. Compared with the developed nations, India has the lowest import duty on products such as polyethylene, poly vinyl chloride, polypropylene, and polystyrene etc. On the contrary, the country has heavy duty on inputs. Import duty on reformate is 10%, naphtha, propane, butane, and other intermediates like ethylene and propylene is 5%. This has affected the local production. Products like vinyl chloride monomer and styrene are also not manufactured domestically. 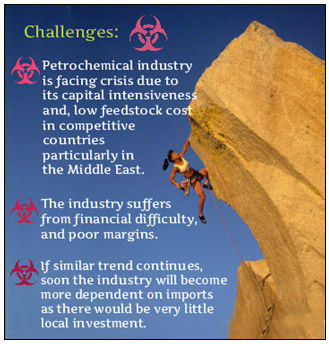 Petrochemical industry is facing crisis due to its capital intensiveness and, low feedstock cost in competitive countries particularly in the Middle East. Consequently, the industry suffers from financial difficulty, and poor margins. If similar trend continues, soon the industry will become more dependent on imports as there would be very little local investment.

India enjoys FTA with Singapore, which is the biggest exporter of polymers. As a result, polymers imported from Singapore have very less duty of 2.3%, which is expected to zero down in a short time. This will result in the case of revered duty. Products from petroleum refinery reforming process attract 10% import duty. Primary downstream petrochemicals from reformates have zero duty resulting in reversed duty.

The Government should initiate policy measures to create conducive business environment for the domestic producers, and encourage investment, and employment in the industry. Industry players positively expect proposals to boost the sector in the upcoming 2013-14 budget. Import duty can be increased making the local investment viable. The duty structure would also be similar to that of developed economies.

Indian petrochemical industry has unrealized potential. Demand is expected to grow by 7-8% in 2013 with a healthy growth in the relevant industries such as clothing, automobiles etc. Government and the industry players will have to work in tandem to achieve ambitious targets for the industry.