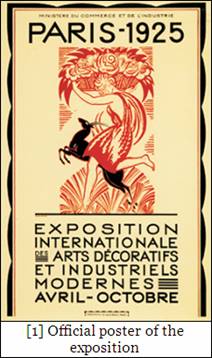 The term "Art Deco" has become a collective term for almost any object of conscious design, whether sophisticated or naive, if it was created between the first and second World Wars. It was through Art Deco that modern art initiating in fine arts, transposed itself into applied arts. Art Deco is credited for presenting an array of bold designs- strong in form and colours, leaving behind the highly embellished, curvilinear and stylized natural forms as were dominant in the preceding Art Nouveau style. Society at this time was moving into a fast, industrialized, practical- machine age. Everyone marveled at the man made advances and celebrated technology. The modern fascination with speed and machines inspired artists and designers to incorporate dynamic geometric forms to express and reflect these phenomenons. Art Deco is an abbreviation of the title of the most important Exposition

Internationale des Arts Decoratifs et Industriels Moderns held in Paris in 1925 [1]. The primary reasons which attribute to this exhibition were, firstly, it was an attempt to forget the four intervening years of nightmare during the First World War; secondly, France wanted to re-assert her position as the ruler of taste and style and lastly, to show the world that French taste would once again lead the way in evolving a new international style. 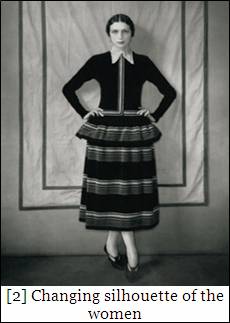 The First World War, being a major stimulant, completely changed the picture of modern living especially the position and role of the women [2]. With their husbands at the forefront, women had to take up 'men-oriented jobs' which previously they had never indulged into. From voluminous gowns, their clothing was brought down to short, loose-fitting costumes. Fashion reflected the fact that women were more independent than ever before. Women were bobbing their hair into short styles, wearing makeup, and smoking in public. The silhouette of the modern dynamic woman was more tubular, and hence, designs had to be created which would go along with the streamlined attire. The forms of the day required jewellery with simple lines and vivid colours to complete the detail of the outfit. With more of skin show, most widely used jewellery included, neckwear-pendants, wrist wear bracelets and watches, brooches, ear ornaments-long danglers, and rings taking the size of signet rings.

It was at this time around 1923-25 that the skyscraper boom had hit America. Perhaps this is the reason for Art Deco entering into America. With the overall trend moving towards a longitudinal silhouette across different fields, jewellery too was created to blend with this new style and compliment the looks. 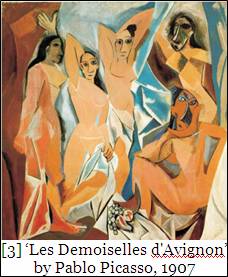 The Cubist painters were on one side rejecting the traditional techniques of copying nature, modeling and foreshortening. They emphasized two-dimensionality on the canvas. The forms were henceforth reduced to their basic geometry. Primary geometric forms were juxtaposed to create complex linear configurations. [3] Also, architecture of ancient civilizations, for instance, ziggurats, inspired abstract patterns in jewellery.

The Fauves exhibited interaction of pure colours on canvases rejecting perspective and chiaroscuro. A new artistic universe was presented where a palette of gaudy colours was filtered down to the public. Post war gloom, this idea was widely accepted. Ballet Russes [4] was another sudden explosion of a strong array of vibrant colours which revived fashion and style. These events swept aside the evanescent shades of Art Nouveau. Apart from these ongoing parameters, Art Deco steals into various cultures, such as, Egyptian, Chinese, Japanese, Persian, African and Indian.

Deco jewellery is most often bold and angular. Wildly colorful pieces were common but in addition to these were ones made using just two colours, perhaps black and white. In addition to precious stones, jewellery was made of paste, coral and onyx. The hierarchy in gemstones as was previously established was dismantled and sometimes precious and non-precious stones were juxtaposed to create looks uniquely "Art Deco" [5]. One may suppose, along with Emile Sedeyn, that "the most likely to last are not the showy pieces but those in which metal is combined with raw materials- such as aquamarine, topaz, amethyst, tourmaline, moonstone, turquoise, jade, lapis and coral- whose worth lies in their beauty rather than their price. Art, which is timeless, will prolong the life of these pieces of jewellery and allow them their true character. No one will dismantle them in order to re-use the materials in other forms. They are works of art rather than valuable commodities." The discovery of cultured pearls by Mikimoto was a significant development. Pearl became a typical jewel of the Twenties. A new concept was that of costume jewellery, mass produced in all kinds of materials like horn, bone, faux gemstones etc. by leading designers like Coco Chanel and Elsa Schiaperelli. Platinum witnessed a revolution and earlier being used in arms and ammunitions, it was now put to extensive use in haute jewellery. Other materials to be used for the first time in jewellery included Bakelite, stainless steel, aluminum and plastics.

Some of the pioneers of this age include names like Louis Cartier, Georges Fouquet, Mauboussin, Van Cleef et Arpels and Bvlgari. Among the Avant Garde jewellery designers were Gerard Sandoz, Jean Fouquet, Paul Brandt and Raymond Templier. The Stock Market crash of 1929 however brought an adverse effect to the entire economy, particularly the luxury industry. Economy revived only after US entered World War II, leaving behind the rich, inventive, modern "Art Deco" Style amidst gloom and misery.

The Twenties, once disparaged, and then forgotten, are again entering the limelight. Today, not only do the pieces of Art Deco jewellery soar at the huge sale by auctions but are also being modeled by contemporary jewelers. The age of Art Deco can be seen as the time span when the artist was left with a blank canvas, free to use any and every resource to satisfy his creativity. The varied explorations with materials, colours and forms are commendable. What is even more appreciable is that in between all these explorations, harmony in design was nowhere compromised.

Many critics assert that in view of the need for mass production, resources should be utilized optimum and not spent on unnecessary 'ornamentation' as was prevalent during Art Nouveau and before. In fact, this idea supports modern design concept which lays emphasis on 'simple design'. Art Deco paved way for evolving the international design style that was functional and minimal in its characteristic.

Presently over thirty Art Deco societies are actively operating in major cities across the U.S., England, Australia, New Zealand, South Africa, South America and Canada to foster awareness and appreciation of the Art Deco period and to preserve the precious decorative, industrial, and architectural arts of that era. Fashion Weeks across fashion capitals continue to showcase collections taking inspiration from Art Deco. Designers are introducing new lines based on these them. However what is noticed is that present designers are directly imbibing the motifs and colors of the design movement in their collections.

There is much wider scope where the designer can and should explore into the heights and depths of the possibilities and utilize them to innovate styles and silhouettes with Art Deco forms. Art Deco was a jubilation of the newfound machine revolution. All forms of art and all elements of design focused about this. As in the latest trend, many renowned brands are creating timepieces using the minute findings as design elements on the dial. This, in a way represents the spirit of the appraisal of mechanics. Techniques like hammering metal and carving gemstones, popular in Art Deco, are being widely applied in jewellery till date.

This style was a mirror to the machine age, to how the society was advancing socially and technologically at the time of the "roaring twenties". Machines were a never-seen-before phenomenon and swept the social scene like a craze. Art Deco jewellery portrays this spirit. Likewise, the twenty first century abounds in the digital age. While the manual was mechanized, the mechanized has been digitized. Newer phenomenons are those like the sixth sense technology. Today's mass and market swear by technology. Accessories and jewellery of the future have great scope around these innovations and can be helpful to create customized variables and accessories. Today when gadgets can become fashion accessories, the latter too can turn to 'technological fashion'. Also, not just digital technology, the recycling technology too is taking over. Just like Art Deco experimented with new materials, various new materials and styles can be innovated in accessories and jewellery too, applying this idea. Designs of the jazz age were not only creative but also economical to be used by the common masses. Application of these will create a new range of user-friendly and cost-effective jewellery. Art Deco jewellery had a distinctively recognizable style that combined extravagance with simplistic lines and sleek designs. It made glamour and elegance universally attainable. It allowed for the expression of independence and individuality, and opened the doors to modern, forward thinking. It was a symbol of fun, revelry, prosperity, and luxury. The spirit of Art Deco will always continue to inspire artists and designers across nations and will be an important source for future developments in this field.