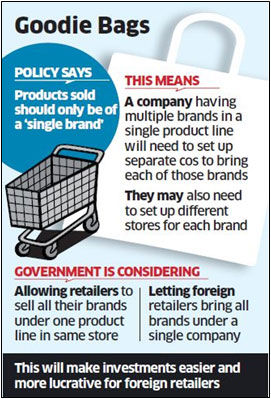 The government plans to significantly liberalise foreign direct investment (FDI) norms for single-brand retail to attract big bucks into the sector. The finance ministry has asked the Department of Industrial Policy and Promotion (DIPP) to amend the policy to allow single-brand retailers to bring different brands belonging to the same product line under one company.

It has also asked DIPP - the government department that frames foreign investment rules in the country - to allow these retailers to sell different brands in the same store.

"If the same owner has an identical product line under a different brand name, why should he be required to set up a different company," said a government official privy to the thinking of the finance ministry.

The Foreign Investment Promotion Board, or FIPB, the inter-ministerial body that approves FDI proposals in the country, has received 63 proposals from single-brand retailers after FDI was allowed in the sector. While the rush of applications clearly signals the interest of foreign investors in the sector, most retailers want the policy to clearly allow them to sell their different brands in the same store.

"Any policy has to have that dynamism to address the requirements of the changing business requirement," said the official quoted earlier.

Independent experts welcomed the government rethink on the issue.

Ownership of several brands by an investor does not make it a multi-brand retailer... The requirement to have separate companies for each brand merely creates incremental compliance and inefficiency of operations through multiple companies, said Akash Gupt, executive director, PricewaterhouseCoopers.

The government raised the FDI limit in single-brand retail to 100% in January 2012.

The single-brand investment norms have already been tweaked once after Swedish furnishing major IKEA sought several changes while proposing its Rs 10,000-crore investment.

DIPP did away with the mandatory 30% sourcing requirement from small industries and also said the brand need not be owned by the investing company. Any entity with a valid agreement to sell the brand in India could seek a licence under the policy. The government is keen to attract FDI as it will help it bridge the large current account deficit, and is taking measures to make the regime friendlier for foreign investors. It has decided to review and possibly abolish FDI caps in many sectors.