Fibres of Hibiscus cannabinus have immense potential applications in the field of textiles.

In pursuit of sustainability, there is a mushrooming need for production, and application of natural fibres. It would be a bit surprising, that a weed can confiscate huge amount of carbon, and also provide commercial options for its fibres. Hibiscus cannabinus, also known as kenaf have commercial applications in the making of twine, rope, paper and cloth. Tall and slender, resembling bamboo or jute, kenaf is in the hibiscus family, and is related to okra and cotton. This is a 4,000 year old crop, originating from Africa. It is much cultivated in countries such as India, Bangladesh, Indonesia, US, Malaysia, Thailand, some parts of Africa, and Viet Nam. 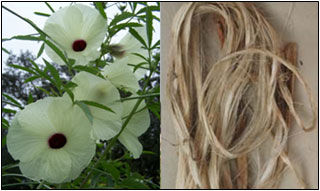 Kenaf is primarily grown for its fibre. It has as amazing ability to grow up to 14 feet in one growing season, yielding around 6 to 10 tons of fibre per acre. Fibres in kenaf are usually found in the bark, which constitutes 40% of the plant, and at the core which makes 60% of the plant. Kenaf fibres are used for making textiles, for more than thousands of years. The Egyptians used these fibres to make boat sails, and other textiles. Fibres made from the outer layer of the plant were used for making cords, ropes, and storage bags.

Processing of the Fibre:

Bast fibres are simple to process. Blended with cotton, kenaf fibres can be made into yarn and woven into fabrics. These textiles are aesthetically pleasing, lightweight, and have a soft feel. Apparels have the appearance of linen. They are the most sustainable fabrics, due to its growth rate, and ability to replenish. It does not require much water for its cultivation, almost no fertilizer or pesticides, and grows to its full length in approximately 150 days. Kenaf is completely bio-degradable as it does not require many chemicals for its cultivation or processing.

Kenaf fibres are produced by separating the core of kenaf from the fibrous outer layers. The extracted layers are chemically or bacterially retted to convert it into fibres. Retting is a wet process by which bundles of cells in the outer layer of the stalk is separated from the non fibrous material by removing pectins and other gummy substances. Thereafter they are separated into strands through carding. Two types of retting are in practice; bacterial retting using micro organisms under controlled water temperature and flow

producing pollutants, and chemical retting using alkali solutions. The retted kenaf is then blended with cotton and spun into yarns which are woven or knitted. Fibres that are thinnest and longest are used in the textile industry to spin yarns with a metric count from 12,000 to 25,000 and fabrics for clothing and home textiles.

Fibres spun from kenaf are extremely long, making it a good choice for weaving fabrics. The plants stalk contains less than 30% lignin, making its fibre extraction easier, when compared with other natural fibres. Lignin is a glue like substance which fills spaces in the plant fibres. Kenaf fibres find useful applications in making knit and woven textiles. These fibres blend very well with cotton, and finds commercial and healthy applications in making outerwear owing to its natural absorbency, and fire-retardant abilities.

Hibiscus fibres have good fire retardant abilities. They also have antimicrobial properties, and posses good resistance to mildew and rot. So, the fibre sees positive applications in making active wear with odor control properties. Apparel and upholstery fabrics are manufactured using retted hibiscus blending it with cotton. Approximately 50% of the plant stalk has fibres that can be used in the making of knitted and woven garments.

Kenaf has an ability to absorb huge quantities of CO2, the global warming gas, comparatively 3 times more than a tree. It can convert more CO2 than a tropical rain forest during its growth. Further it can also improve the soil structure, while fixing soil nutrients. It is biodegradable, as no chemicals or pesticides are used during its cultivation.

Kenaf fibres are a good alternative to synthetic fibres. They offer sustainable advantages while also enhancing cost saving amidst increasing fuel prices. Keep kenaf fibre fabrics on the wardrobe and be the coolest kid on the block.