Online retailers are handing out pink slips in large numbers as they shift attention to controlling costs from acquiring customers, several industry executives said. Among the companies sacking staff are Flipkart and Jabong, which are among the biggest in the business, illustrating the growing pain in India's e-commerce sector. 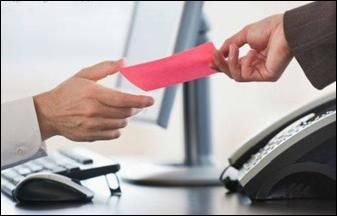 Nearly 250 employees, or about one-tenth of Flipkart's workforce, are being shown the door, according to at least three people with direct knowledge of the development. At Jabong, too, a similar number of employees have been sacked, but the company employs fewer than 1,000 staff.

"People are being let off every month," said a Flipkart employee who was sacked in April. Most of the layoffs are from the supply chain, logistics and call centre teams. Flipkart did not reply to emails seeking its comments. A spokesman said asking "non-performers," or the 10% of employees with the lowest ratings, to resign is a general practice during the annual appraisal process. Jabong's co-founder Praveen Sinha, however, admitted to sacking only 20 employees, so far.

Both companies said they continue to hire, but industry executives who spoke on condition of anonymity said it is for the first time that e-commerce firms are sacking staff in such numbers. Inkfruit, an apparel portal acquired by web retailer Zovi.com last year, has also asked several employees to leave.

The retrenchment in India's online retail sector is a consequence of the drive by companies for acquisition of customers at a breakneck pace. Gross margins at many online retailers are in the negative territory.

An estimated 70% of revenue is used to acquire new customers. "The period of land-grabbing is over. Now there is investor pressure to achieve efficiency and positive economics per transaction," said Pearl Uppal, co-founder of early stage investment firm 5Ideas, who was earlier the chief executive of apparel portal FashionandYou.com.

Many ecommerce firms have been under pressure to alter their business models to comply with regulations. At present, online ventures that have received foreign direct investment cannot sell multiple brands directly to customers. Many online retailers have therefore adopted a marketplace model where they aggregate the products of multiple vendors on their sites. 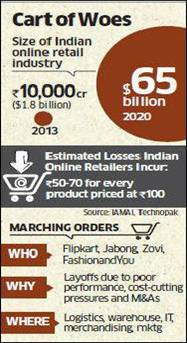 While bottom lines have been negative, the Indian online retail segment is growing fast, with revenues this year estimated to rise to `10,000 crore from ` 6,500 crore, according to the Internet and Mobile Association of India.

Investors keen to back such growth are now insisting that companies focus on profitability. "Companies cannot lose money in terms of high direct costs," said Rahul Khanna, managing director of early stage investor Canaan Partners, which has backed firms such as Naaptol and Instacart.

A spate of mergers is also leading to lay-offs in the sector. Inkfruit has asked about 80 employees to put in their papers, according to industry sources. The merger between apparel portals FashionAndYou and UrbanTouch last year led to the exit of 200 employees of UrbanTouch, according to multiple individuals with direct knowledge of the development.