Probable influence of Roman Empire on the Indian Sari

(Viewsexpressed in this article are the personal opinion of the author.)

Between321 BC and 850 AD India was one of the worlds great civilizations. Parallel tothe Roman Empire in the west and the Chinese Empire in the East, ChandraguptaMaurya founded the first large empire in India (including the present dayPakistan and Afghanistan). Trade links to the east and west were alreadyestablished. Textile and spices were among the most prominent trade items fromIndia.

Probablyowing to the climatic conditions, the Indians did not feel the need of cut andstitched garments. Cotton was first grown and used in India. Indians hadmastered the art of embellishing the cloth. They used gold and silver in theirclothes. The Ancient Indian costumes belonging to the Vedic and post-Vedicperiod (1500 BCE to 350BCE) generally consisted of three articles of clothingfor men and women alike. These were not cut and sewn garments, but rectangularpieces of beautiful textiles. There was the Antariya, which was like aloin cloth. The ways and variety of draping it were many. It could be wornsimply wrapped around with pleats in front. It could be taken in between thelegs in kaccha style, or could have the loose end pleated like a fan.The fabric ranged from sheer to thick depending on the person wearing it.Sculptures of the periods show varying lengths of the antariya, endingas high as modern day hot pants, or as low as the ankles.

Theother rectangular piece of cloth was the uttariya which was like amantle. It covered the upper part of the body. The Uttariya could be wornacross the back, resting on shoulders and left to fall freely on the forearms.Sometimes women took two uttariyas, one draped beautifully on the head, and theother across the arms. All this while there was no covering on the breasts.

Yetanother piece of clothing was kayabandh, which was like a belt to holdthe Antariya in place. The kayabandh could also be tied in various styles; itcould be taken around the body two or three times, and tied with differentkinds of knots. The sculptures reveal that Atariya was always tied below thenavel, emphasizing the curves of the female form. Both men and women wore amplejewellery, and adorned themselves with flowers.

Duringthe Mauryan period, the basic articles of clothing remained the same.Chandragupta Maurya, who founded the Maurya dynasty in 320 BC, himself marrieda princess from the Greek Selucid court and was in close touch with his Greekneighbors, so that court life had about it a strong exotic flavor with itsforeign inmates wearing their own costume, Alkazi, 2006. The Indians had tradelinks with Romans, Instead of linen and wool, women preferred lighter, softermaterials, cotton stuffs from India and, most of all, silks, which reached Romeby the land routes of the Empire or through Indian and, later, Egyptiantraders., Boucher 1998.

Megasthenes, the Greek ambassador at the Mauryan court, writes in Indika about the riches of the Mauryan court and the prevailing styles of dress. It is around this period that we begin to see the changes in the indigenous costume of the people of Indian subcontinent. We see a strong Greeco-Roman flavor in the costumes.

Though most of the women are shown bare-chested in the sculptures, and so are men, the literature of the period reveals that married women wore a breast band, to cover their breasts. It was known as stanmasuka or Pratidhi, which is similar to the mammillare worn by the Roman women. We come across another term for Antariya known as nivi or nivi-bandha. There is no reference to wearing of the lower garment in the style of a modern saree. Brij Bhushan 1958. Although we come across some sculptures wearing a saree like garment, but mostly there were two separate garments. In many parts of India we still have a two piece sari.

The sari with its endless variety in texture and in colour, in layout and in decoration, is the prominent female costume of India Bhattacharyya 1995. Sari is regarded as the traditional costume for Indian women. When did saree come to be as it is today is debated by many scholars. Some believe that existed from the Aryan times, female households wore a kanchuka (tunic) and a sari. The dhotis were worn in different styles and individual creativity was reflected in various forms of sari draping around the body. Vinay Bahl 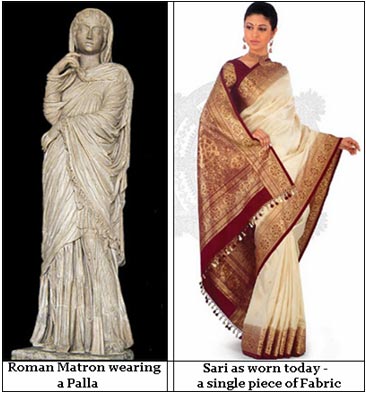 If you look at the clothes of a Roman woman during the time of Roman Empire - you see something more of a sari as worn later in India. The saree as we see today has a main body and a rectangular area towards the end which hangs lose from the shoulder, incidentally this is known as the palla.

We come across the term palla while studying Roman costume, whereas this term finds no mention in ancient Indian costume. A few historians believe that the modern saree was a result of the Roman influence. The indigenous antarya and uttariya were combined together along with the palla to give rise to the saree as we see today, which we regard as the traditional costume of India.

A rectangular piece of fabric varying from 5 to 9 meters in length and almost 1.5 meters in width, with a plain or decorated body and a decorated end piece known as the palla or anchal, is the quintessential garment of the Indian woman, known as the saree. From Kashmir to Kanya Kumari, it is the saree which binds the Indian woman, the style of drapery varies from one state to another, and so do the motifs and styles of weaving.

The Choli which is like a fitted blouse came as an addition during the Gupta period (early 4th Century). The Choli probably came to be because of primarily two reasons, one of them was modesty, the other was the influence of cultures from the west. The evolution from unstitched to stitched garment has an inescapable logic when it evolves for purely functional purposes. In case of Germanic races, it was protection from the cold, and in India, it served the purpose of modesty, Alkazi 2006.

This article was originally published in the Costume Textile and Fashion Blog written by Toolika Gupta.

By:
Toolika Gupta
Published: May 2013
Reuse this Content
Our Clientele