Themodern Czech Republic is made up of three distinct regions that of Bohemia,Moravia and Silesia. Each area has their own traditional culturaldistinctiveness in many aspects of life including craft. Although the region ofthe modern day Czech Republic was for centuries an integral part of theAustrian Empire and the three regions of Bohemia, Moravia and Silesia havecommon languages, customs and traditions, there are subtle differencesthroughout the region, whether on the larger scale between Moravia and Bohemia,or indeed on the much smaller and subtler scale between villages.

Despite the fact that both Moravia and Bohemia have shared a more or less consistently joint history for the last one thousand years, Moravian decoration has made an impact on the decorative arts of Central Europe, particularly at the turn of the twentieth century. Within the Wiener Werkstatte which was founded in Vienna in 1903, at least eight of the designers who worked for the Werkstatte were born and raised in Moravia. These included some of the main instigators of the movement including Mathilde Flogl, Anton Hanak, Robert Obsieger, and most importantly Josef Hoffmann himself.

Hoffmann often talked about his personal connections with Moravia and how he felt that part of the traditions and cultural heritage of the region were reproduced, at least to a certain extent, through his interpretation of contemporary decorative art. That Hoffmann's influence on decoration also became a large part of the general appearance of the work produced by the Werkstatte, goes without saying. At least some of the examples of Moravian embroidery design shown in this article have fairly close connections to some of the contemporary decorative work produced in Vienna during the period of the Werkstatte.

It is sometimes difficult to separate the Viennese designers from Vienna itself. However, it is worth while tracing back their individual history to the different areas of the Austro-Hungarian Empire. While many were indeed native Viennese, many more were from 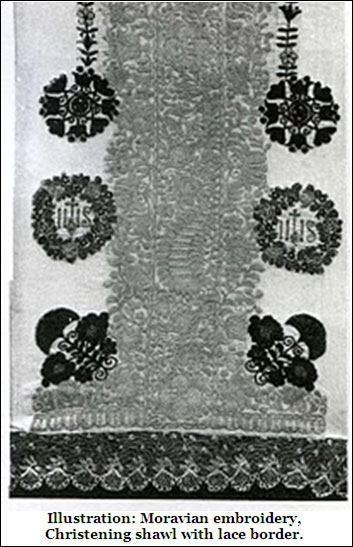 Bohemia, Moravia, Hungary, Galicia, Dalmatia and other provinces of the Empire. All brought their individual and cultural distinctiveness to Vienna, which made Viennese design and decoration during this period inevitably richer and more complex for its multi-ethnicity.

Although there is no suggestion that the Wiener Werkstatte was a mere amalgam of ethnic styles from across Central Europe, it has to be born in mind that distinctive craft skills from across the Empire, such as Moravian embroidery, did have at least a partial influence on the styles and appearance of the decorative arts of Vienna and particularly that of the Wiener Werkstatte. That traditional craft skills and pattern work have had an influence on contemporary decorative arts, is a constant throughout most eras, but one that is often trivialised or ignored. The roots of an individual artist or designer often influence their work much more than often assumed.

This article was originally published in the Design, Decoration, and Craft at Textile Blog.

By:
John Hopper
Published: Jun 2013
Reuse this Content
Our Clientele