Local authorities in Mumbai may have banned skimpily clad mannequins on the bizarre ground that they may trigger sexual abuse on women, but Indian retailers are lapping up these life-size toys for their uncanny ability to sell fashion. Retailers say garments displayed on mannequins sell much faster than others; hence they want to display all their styles on perfectly shaped, tall and modern lay figures.

"Garments displayed on mannequins sell 43% faster," says Anuraag Singhal, visual merchandiser at Allen Solly, a Madura Fashion & Lifestyle brand." Earlier brands used to change the look once in a month, but now it's being done every three days and even daily by some retailers to ensure that windows look fresh," he says.

Sanjeev Mohanty, managing director at Benetton India, says the number of mannequins the fashion brand has in a store has doubled in about five years. "They play a very crucial role in sales," he says. A flagship Benetton store houses up to 40 mannequins, while smaller stores have around 10.

Shop owners across the country now demand tall, modern mannequins. They call it Zara mannequin because one dummy the Spanish fast fashion brand imported found its way into the domestic market and copies of it are now being made in bulk and sold in hundreds.

"Zara has very stylish and eye-catching mannequins," a mannequin maker said on condition of anonymity. "The copies have huge demand, especially coming from Indian brands and fashion designers, boutique owners," the person added. The fast fashion brand that has proved a roaring success in India seems to be setting the benchmark even for dummies.

That means mannequins in Indian stores are no longer short, stout and voluptuous; they are rather tall, chic and in perfect shape. "With the craze for size-zero figure growing among Indian women, even a mannequin is not voluptuous anymore," says PradeepHirani, chairman at Kimaya, a nationwide multi-brand ethnic fashion retail chain. It is extremely critical they possess the desired body, grace and attitude, he adds.

Till about a few years back, retailers wanted mannequins that were more realistic, had body (read fat) and features of an average Indian, with wigs and simple poses, painted eyebrows, lips, and absurd wigs. The trend has changed in favour of the ones with western bodies and abstract ovalshaped faces without features or even headless, yet striking. 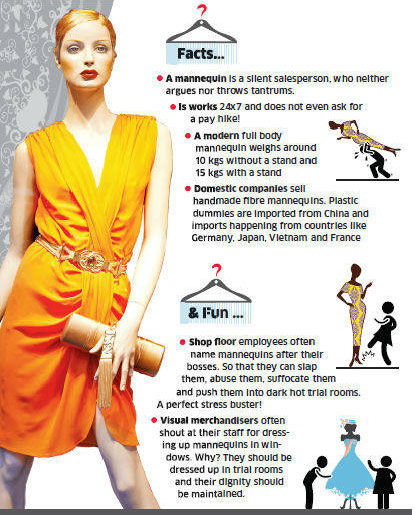 "No standards were followed earlier in terms of body measurements," says Sanjay Gupta, founder of Deep Mannequins. He used to get orders of all shapes and sizes (odd at times), but now they have standards like 5 feet 10 inch height with 34-24-36 vital stats for a female dummy and 6 feet with 38-32-38 measurements for a male.

"In the past I have sold even 5-feet tall and full-bodied mannequins, but there are no takers now," says Gupta, who supplies over 500 pieces a month to over 20 brands, including Arrow, Levis, Gant, Reebok, Kazo, H&A and John Players.

Mannequin makers attribute this change to more international brands coming into the country. Ravi Verma, founder of Clone Mannequins, says, "Even the domestic brands are being forced to upgrade to international styles." Clone Mannequins, which has been in the business for over 25 years, also imports mannequins from Germany, France, Paris, China and Taiwan.

Rajinder Singh Bhatia, co-owner of Delhi based Concept Mannequins, says, "The demand is growing around 30 % every year." His firm sells around 400 pieces every month. Made-in-India mannequins cost Rs 2,500 to Rs 10,000, while the imported ones cost anywhere between Rs 8,000 and Rs 50,000.

There are over 1,000 different kinds of mannequins varying in size, colours, pose, material and finish available in the market, compared to the standard 10-15 standard designs earlier.

So no matter if the Brihanmumbai Municipal Corporation has banned them from posing in lingerie or Greenpeace volunteers dressed as mannequins staged 'mannequin walkouts' at Zara stores in 80 cities across the world last year to protest against the alleged use of toxic chemicals by the Spanish fashion brand in its garments, these life-size dolls are here to stay as silent but effective salespeople.