Hortiproduced these three carpet designs at the turn of the twentieth century, twobeing produced around 1899, and the other in 1902. This places them firmlywithin the Art Nouveau phase of European decorative art. However, sometimes weare a little too prone to placing an overt emphasis on the convenience oflabels, finding it necessary to coral everyone into a generic group. Althoughit may well make our lives easier, and to be fair it does make the study ofdecorative history neat and tidy, it does not necessarily hold true.

Thedocumented Art Nouveau movement itself is commonly held to have lasted a meredecade at most. Most hold the dates 1895 to 1905 as central to the movement,although there is give and take either side of these dates. It should beremembered that no movement appears from nowhere, and Art Nouveau is nodifferent. The style can be traced back, to an extent at least, through to theeclectic Aesthetic movement of the 1880s, the Arts and Crafts movement ofaround the same period, even to the Gothic Revival of the mid-Victorian era. Ifwe go forward into the twentieth century, it is quite easy to see thedevelopment of Art Nouveau into the early years of the Art Deco movement,particularly the French form, which often placed the emphasis on the luxurianceof decoration, rather than strictly that of the Modern.

Thishelps to explain that style eras have roots from the past and tendrils to thefuture. They have never appeared fully formed, that is an artificial constructfor convenience sakes. As to the individual creative's who are often identifiedwith a decorative era that is also problematic. There are indeed some designerswho shone brightly within certain decorative eras, often becoming so firmlyidentified with the particular style that they found it difficult to move oncreatively. Just as an actor can find that a long-playing character caneventually become a burden rather than a godsend, the same is true of agenre-captive writer, singer, or musician.

Thedecorative designer needs a full career, not just a decade under the title of'Art Nouveau', for example. A number of pattern designers in particular,flourished throughout the Art Nouveau era and then went on to excel in the ArtDeco period, some even making it through to the mid-century period of the1950s, tailoring their output to fit the tastes and fashions of thecontemporary era they found themselves in.

Another group of designersare the individuals. These are the designers that, whilst understanding andusing the contemporary style era as the foundation of fashion and consumer-ledsales, still managed to maintain an element of individual creativeness thatoften overlapped the style of the day. They were able, with a littlemaintenance and maneuverability, to maintain a personal creative journey,whilst still paying attention to the contemporary style eras they foundthemselves in. In this group could be placed Paul Horti. 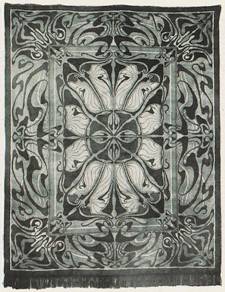 Horti played with the Art Nouveau genre in these three carpet designs. For example, there is just the right amount of stylized fluidity that was so closely associated with the decorative movement. Nature is at the centre of each piece of pattern work, some more affected and stylized than others. There is a focus on movement, whether languorous or strident. All was as it should be. However, Horti also added that extra quality that maintained his individual approach.

In the first example shown, he plays with the ideal of the natural and practical flatness of the carpet, with the design appearing to complement and recognize that practicality. However, if you look closer you soon recognize that Horti is actually playing deeper and further than at first presumed. There is another level of lighter swirling and undulating tendrils underneath the more obvious darker pattern work. In fact, he has two distinct layers of pattern work, two carpets that are balanced and maintained as one. 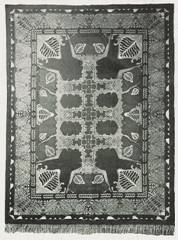 In the second example shown, Horti seems to go for a more traditional approach to the carpet, at least on first viewing. The main design could be said to have links to the traditions of Islamic carpet design, however, the link with traditional central and eastern European carpet design is probably much stronger. We have to remember that Horti was a native of Hungary and would have been familiar with the traditional rug and carpet work produced across the region. Still, although not as obviously contemporary as the first carpet shown, Horti still imbues this particular carpet with the sharp focused graphic lines of Art Nouveau, particularly in the sharply contrasted large leaf motifs. 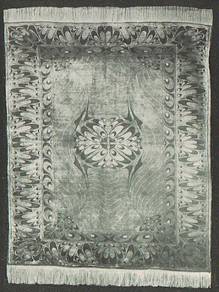 The last example shown has Horti, still using the Art Nouveau formula, approaching carpet design as if it were a marbled-effect endpaper design (the inside patterned cover of a book). All of the composition, apart from the internal border, has a fluidic approach. Horti has given the impression that the pattern work has been achieved by using languorous strokes of ink across an oiled surface. It is a perfect play on the tightly identified particulars of the Art Nouveau movement, languidity and fluidity. Playing with the popular contemporary style, but in the end producing something else, something new.

So Horti, like other contemporary designers, played with the fashions and foibles of the day, using the framework that had been set out for them by fashion, convention and consumerism, and then injecting their own forms of individual creativity, thus warping the original to their own needs.

From this article, it is easy to see how nothing is ever as easy and straightforward as the decorative history books would have us believe. However, perhaps we need to regularly remind ourselves that we are dealing with one of the most complex animals on the planet, at least as far as the brain is concerned. Therefore, trying to cram these complex individuals into small and simply labeled boxes, whether by historians, advertisers, politicians, or each other, is both futile and misleading.

Still, we all like to deal in certainties and The Textile Blog has done its fair share of labeling and will probably continue to do so, sometimes without even recognizing the irony!

By:
John Hopper
Published: Aug 2013
Reuse this Content
Our Clientele