The German architect and designer Peter Behrens is more usually identified with either architecture or product design. He is firmly locked into the Modernist cause and although it is admitted that he produced work in a range of disciplines, this is often put down to a relatively early phase of his life before he set out on the road of Modernist architecture in particular. 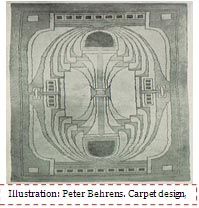 Behrens designed for disciplines that ranged from textiles, through to ceramics, metal, glass, wallpaper, illustration, and graphics. To give some idea as the breadth of his design work, four disciplines are illustrated in this article, glass, carpet, and mosaic and textile design. It has to be remembered of course, as said somewhere elsewhere, that a designer is not necessarily automatically associated with a maker. Just as it would be unlikely that an architect would also be a bricklayer, it would also be unlikely that a designer would be a maker.

Across the range of multi-disciplined work produced by Behrens, this article has specifically chosen four pieces of work that, although seemingly having little in common, apart from the designer, are nevertheless linked. All the pieces of work are linked by the use of a central core as a focus in the design. All of the individual pieces whether produced as a skylight, carpet, mosaic, or textile designs are individualized. In other words, they are not a repeatable pattern as such and can be seen, to an extent at least, as unique pieces of work that are contained within their individuality. 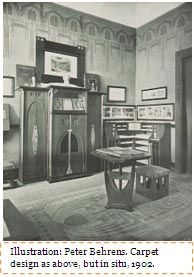 There is something about the mandala approach to decoration, which these pieces often resemble, that gives work that is often not intended as such, a focused, meditative, sometimes even spiritual dimension. This is particularly apparent in Behrens design for a skylight, the first illustration shown. Although meant for a domestic setting, the skylight could easily have been requisitioned for a religious building. That particular potential leads on to ideas as to the mandala style itself.

Decorative work that is contained within a framework, which can be anything from a three sided triangle, through the many different sided shapes to a true circle or ellipse, and contains a central core that is often exponentially built upon until it reaches its framework edge, have been found across most cultures and through all eras. Many of them are found to be specifically symbolic and associated with some form of spiritual dimension. Perhaps that is part of the reason that we still find them so intriguing and why we often separate them from the more mainstream versions of decoration and pattern work.

Although the notion of mandala like decorative work is widespread, some disciplines favour the idea of a focused central core more than others, and whilst to be fair it is often associated with more practical, technical reasoning such as the natural shape of carpets, ceramic tiles, glass windows, etc., which often follow the square or rectangle, there is still something extra that we often feel when we come across this specific type of decorative work. 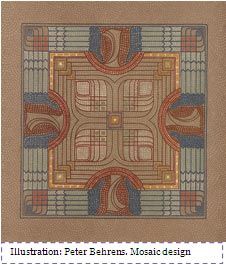 You could, in some ways at least, call it a shift in perspective, one that takes us from the everyday outside world of observation and experience, to one that connects us with the inside world of contemplation and introspection. Whether this is triggered by us focusing for example on the centre of these designs, whilst also being aware of the containing framework, or series of frameworks, working out from the centre, is unknown and perhaps unknowing. It could perhaps be something else entirely, perhaps a shared experience that is locked up in our joint remembered history as a species. Whatever it may be, these specific design examples are constantly being reorganized and reenergized by each succeeding generation and will probably be with us as long as we remain as a species. 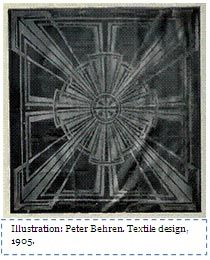 Whatever the reasoning and whatever the personal explanation of the reasoning, everyone for example will have an idea as to why the mandala-type decorative idea is still with us, from the brutally practical to the spiritually esoteric, what does intrigue me is the continuation of decorative formats in general. Decoration is an integral part of who we are, and who we have been. It flavours our lives from generation to generation. We often have no real idea as to why we are drawn to types of decorative work that we have been producing often for tens of thousands of years. We can dress specific styles in contemporary clothing, but that does little to disguise the deeper fundamental attraction to certain types of decoration.

At any rate, it is perhaps something to think about whilst we carry on producing artistic and decorative work for the twenty first century.