Home / Knowledge / Article / Handloom / Lace as an Accessory to Fashion

Lace as an Accessory to Fashion

Lace as a craft and discipline has always struggled with its almost symbiotic relationship with fashion. No textile discipline, apart perhaps from embroidery, has been so wrapped up in the vagaries of the fashion world. Through the different style eras of Europe, lace has seen erratic cycles of expansion and contraction in its fortunes, very often directly influenced by the amount of lace accessorising used by the fashion industry.

All of the examples shown in this article were produced at the beginning of the twentieth century, a period that saw both lace and embroidery enjoy direct and obvious roles as accessories to the leading fashion textile of the day. 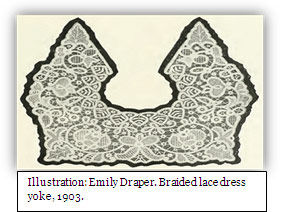 To a certain extent, there was an element of manipulation of costume during the period of the very beginning of the twentieth century. Much work was done by designers, entrepreneurs and wealthy patrons, to promote some of the hand production textile crafts, particularly that of lace, which was seen by many to be the most vulnerable to the rapid changes taking place in the consumer market. These changes, which had the automation of fashion at their heart, was an anathema to a craft such as lace.

Lace by definition was a long and labour intensive pastime, one that had little attraction to the many young women who would have been the natural labour force for the craft. It was poorly paid, the hours were long but could not be depended upon, the workers tended to be manipulated and double-crossed by ruthless middlemen, and one of the main results of lace production was a deterioration of eyesight due to the close and detailed work.

Many of the young women who would have been employed in the lace craft had, by the time of the turn of the twentieth century, been attracted elsewhere. New and more immediate forms of employment were opening up to women, from factory work, to employment in the new industries such as retail in the form of the new department stores, as well as secretarial and office employment. Most of these jobs came with fixed working hours and fixed payments, and although many of the job opportunities open to women were long, hard and with little in the way of meaningful promotion, they were often seen by women as infinitely better than being employed in the traditional textile craft disciplines such as lace. 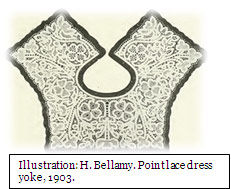 Rather than see the traditional hand lace industry collapse altogether, there were a number of initiatives set up to both promote and restructure lace production on as modern a system as was possible. Many of these initiatives were put into place from the latter part of the nineteenth century onwards. They often applied to the traditional regional centres of lace production in Europe, but also tried to create entirely new areas that had never been associated with traditional hand lace production, often set up in particular employment black spots such as rural Ireland.

Therefore, the use of hand lace for fashion was encouraged. The aristocracy, both royal and petty, were encouraged to become patrons of particular regional lace production, commissioning lace for accessorising costumes that they would wear in public, making sure that the lace work was mentioned when the media described particular outfits worn by the wealthy and famous. In this respect, it was hoped to promote a healthy and vigorous lace industry, at least within a regional concern.

As part of the promotion of a contemporary lace industry and market, art and design colleges, as well as art magazines, held regular competitions for lace design work, as well as other forms of design and craft. These proved particularly popular with students as 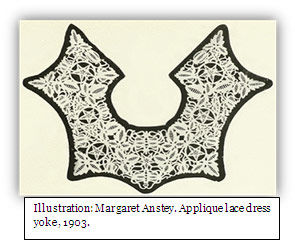 design exercises, although how effective they were in promoting a viable lace industry seems debatable.

Within a couple of decades of the twentieth century, lace as a dependent accessory to fashion had largely withered, and was to make little if any impact on the rest of the century. Although hand lace production is still with us, and will probably remain so, it very much relies today on tourism and the enthusiasm of individuals and groups who manage to maintain at least an element of production, although nothing compared to the days when lace was seen as a necessary accessory to fashion.