A chemical bond is an attraction between atoms that allows the formation of chemical substances that contain two or more atoms. The bond is caused by the electromagnetic force attraction between opposite charges, either between electrons and nuclei, or as the result of a dipole attraction. The reaction between the dyes and fibres must take into account the various types of forces exerted by one molecule upon another. All dyeing mechanisms can be divided into following three groups:

These forces are so named because they were first recognized by Van der Waals in 1873. Very weak forces of attraction are always present between the electrons of one atom and the nucleus of another in close enough proximity. Individually these atoms are very weak forces, but collectively they are considered to be of sufficient strength to be the most important attractive forces between dye and fibre. These forces of attraction are known as Van der Waals' forces. Disperse dyes are held in a polyester fibre by means of Van der Waals' forces.

These forces of attraction are weak forces set up between certain atoms in the dyestuff molecule when they are close enough to other atoms in the fibre. One of these atoms is the hydrogen atom, hence the term "hydrogen bond". Some of the direct and vat dyes are "hydrogen bonded" in the cellulose fibres.

The hydrophobic groups, especially alkyl chains, tend to associate together and escape from aqueous environment. The effect due to two simultaneous causes-the Van der Waals' forces between the hydrogen groups and the hydrogen bonds between water molecules. Each set of forces causes respective assembly of molecules or groups to associate together and to exclude the other. Hydrophobic bonds occur when both the fibre and the dye contain a considerable portion of purely hydrocarbon, aliphatic or aromatic, as with some dyes applied on wool or most dyes applied on polyester. It is a strictly not a new type of bond or intermolecular force.

These bonds play an important part in dyeing fibre containing amino groups, i.e. wool, silk and nylon with anionic dyes. In the presence of water or dilute acids the amino groups become protonated:

Acid dyes, being anionic in solution, are attracted at the positive site of the fibre. As the fibre forms zwitterions on ionization, a negative charge is also created on the fibre. This negative charge is responsible for the attraction towards basic dyes which forms cationic dye ions in solution. However, basic dyes are now, mostly applied on acrylic fibres which contain strong acidic sites. Due to ionization in acidic medium, the negative charged sites are created in fibre which attracts cationic dye ions.

While attracting those of opposite charge, ions in solution can exert attraction upon any polar molecule, giving rise to so-called ion-dipole forces. These forces are largely responsible for aqueous solubility of dyes. The attraction between dipoles on the cellulose both groups and ionic groups in the dye molecules is also proposed.

Bonds that results in very strong chemical forces that are not easy to break expect under serve conditions are called covalent bonds. The classic example is that of the combination of cellulose fibres with reactive dyestuffs, where the hydroxyl group in the cellulose is covalently bonded to a suitable atom in the reactive dye.

Comparison of the Relative Strength of Dye-Fiber Bonds: 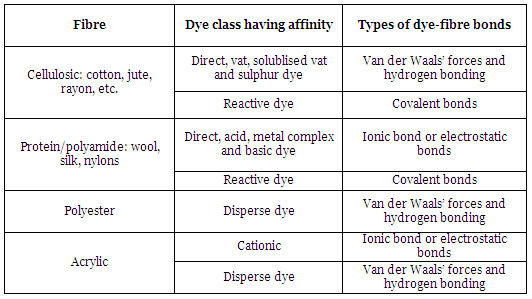