The EU Goes in for Major Regulatory Moves

Trade provides a fillip for the global recovery in general and, in particular, for a convalescent EU. According to the European Commission, trade has never been more important for the EU economy. In light of the current economic hardships, trade has become an imperative means for propping lip economic growth without resorting to seriously constricting public finances. Despite this, the Commission considers that the right policies at home are crucial for reaping the benefits of trade.

In order to keep a firm grip against unfair trade, the Commission has turned to its trade defence tools - antidumping and anti-subsidy measures - to make sure that the EU market is not hampered by unfair trade practices abroad. One needs to keep a close eye on the EU's trade defence and trade-related measures, as well as the proliferation of health, safety and environmental protection measures, with the EU remaining at the forefront when it comes to safeguarding the environment and the overall wellbeing of consumers.

Indicative of its widespread deployment of trade defence tools, the Commission has initiated some 20 new antidumping and anti-subsidy investigations each year since the global recession began in 2009. Not surprisingly, China has remained the main target of these defence instruments. In 2012, for instance, 13 new anti-dumping investigations were initiated of which four were against China. The same year also saw six new anti-subsidy investigations opened, three of which concerned China (i.e. inquiries related to organic coated steel, bicycles and solar panels).

In tandem with the still sluggish EU economy, this disquieting trend has continued into 2013, with three new anti-dumping investigations and one new anti-subsidy investigation opened during the first half of the year, all of which were initiated against the Chinese mainland.

What may ring alarm bells is that the European Commission initiated proposals in April 2013 aimed at modernizing the bloc's trade defence tools. If these become law, the proposed modernization plans will amend the EU's basic anti-dumping and anti-subsidy regulations, brining in a raft of new requirements and pre-conditions. Undoubtedly, one of the most important additions being envisaged as part of the EU's revised trade defence artillery will require EU producers of "like" products to co-operate in an anti-dumping or anti-subsidy investigation which has been initiated ex officio by the Commission, i.e. without a formal complaint from EU producers. While ex officio investigations are already theoretically possible under existing regulations, they are rarely used in practice. The obligation on EU producers to co-operate will likely make it easier for such ex officio investigations to be conducted and for the necessary data to be collected.

On a more optimistic note, other important changes in the modernization proposals will comprise a number of non-legislative proposals and the issuance of Commission guidelines (i.e. on expiry reviews, the Union interest test, the calculation of injury margin, and the choice of analogue countries). Such measures are expected to streamline and simplify EU trade defence mechanisms, which, in turn, should make it more straightforward for any suppliers involved in such procedures to develop stronger defence strategies and thus be in a better position to benefit overall. Any legislative proposals amending the basic anti-dumping and anti-subsidy regulations will need to be discussed and approved by the Council and the European Parliament. It is not expected that any amending legislation will be adopted before 2014.

In addition to trade defence instruments, the EU has also modernized its customs code. The Modernized Customs Code (MCC), which was initially planned to apply from 24 June 2013, will now become effective from 1 November 2013. The aim of the MCC is to adapt the customs legislation to fit - but also govern - the electronic environment for customs and trade. Importantly, there will be a requirement that all data exchange accompanying documents, decisions and notifications between economic operators and customs authorities shall be made using electronic data-processing techniques. Another addition will be the concept of centralized clearance. This will see authorized traders able to declare goods electronically and pay their customs duties at the customs office where they are established, regardless of which EU Member State the goods are imported into or where such goods are ultimately consumed. This has since been adopted. 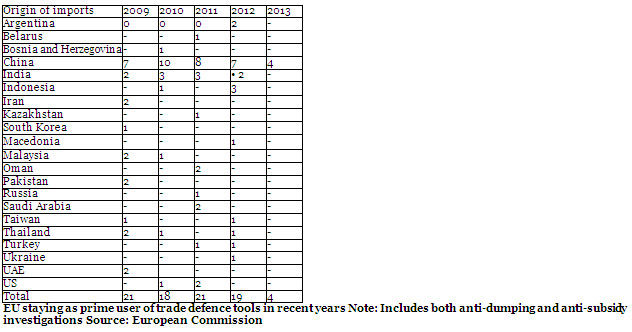 What is going to be a matter of prime importance particularly for the Least Developed Countries (LDCs) are the impending changes to the EU's revised import preference scheme - the Generalized Scheme of Preferences (GSP) which was formally adopted in October 2012 and which will enter into force on 1 January 2014. Under the revised GSP, exporters from a number of so-called developing countries, including China, will continue to benefit from relatively lighter import tariffs on some of their exports to the EU, compared to exporters from more developed countries.

Nonetheless, China is no longer afforded preferential treatment under the current scheme in a number of sectors, including toys, textiles and clothing, footwear, furniture, lamps, jeweler or imitation jeweler, electrical equipment, and watches and clocks.

Another EU law that potentially affects all suppliers of consumer goods sold to the EU is the far-reaching Registration, Evaluation and Authorization of Chemicals (REACH) Regulation. The Regulation places a myriad of obligations on economic operators, with only a limited number of exemptions applying. Suppliers of articles, including consumer articles (such as toys, clothing, shoes, EEE, jeweler and furniture), have to check if their articles contain dangerous substances that are listed on the EU's Candidate List of Substances of Very High Concern. If the answer is yes, then information on those substances has to be passed on to any recipient of the articles in the supply chain, as well as to any concerned consumers if the latter should so request.

The proposed Market Surveillance Regulation, for its part, aims to streamline Member States' enforcement practices against non-compliant manufacturers, importers, distributors and products. The future law is set to grant extended powers to market surveillance authorities in the EU to enter premises and request documentation. Furthermore, the proposed law will allow authorities to publish extensive information about products, including risks that they pose or have posed, even if, by then, corrective measures have already been undertaken. The product safety and market surveillance package is currently being discussed by the European Parliament and the Council, and is on track to come into effect at the beginning of 2015.