Following part one of our year recap, which looked at the biggest apparel stories of 2013, we're back with the best selling trends of the last twelve months. Drawn from our apparel database, we've determined which were the global fashion hits.

There was a global intake of breath as SS13 trends dictated abs would be on show this year. Retailers who reacted to the catwalk's warning signs did well, with products selling fast in jersey, knit and shirts. There were more than 56,000 new cropped products arriving online this year, with the mass market accounting for 56% of products. Our data indicated that this would be a hit, and it's likely going to stay amongst the bestsellers as we head into SS14.

25,169 new leopard print items arrived online at global retailers during 2013 and were repeatedly featured in our Top Mover reports, which detail the fastest selling garments each month. The trend was boosted by numerous influential street style bloggers and celebrity sightings. Working across both men's and women's wear, this trend flew because it received both designer and mass market support simultaneously - Farfetch have been the number one stockist of the trend this year, followed by ASOS. Across markets, leopard print footwear sold the best, seeing the most full-priced replenishments.

This was the largest commercial menswear trend this year, and retailers are still gaining big wins with plaid print on classic shirting items; styles sold out swiftly last month from Givenchy, Forever 21 and ASOS. With more than 520,000 influential online mentions and 22,765 new products arriving online this year, plaid has been a hit in women's wear too (with a split of 51% to 49% of products being for men and women respectively). Women's wear was also spread across a broader product range, with plaid prints on trousers, skirts and dresses selling well for mass and premium markets.

We wrote about these guys recently (here) and 2013 really has been a killer year for the sweater. Statement branded luxury sweaters, mass market slogans or the classic plain variety, this commercial winner has serious stamina across men's, women's and children's wear.

The same movement propelling the sweater trend can be thanked for the enormous success of the bomber jacket in 2013: with designers referencing street wear at just the right moment, the style was picked up by style influencers like Cara Delavigne, Harry Styles and Rihanna. Consequently we've seen the garment repeatedly replenished at Forever 21, ASOS, Topshop and Topman, River Island, Bergdorf Goodman and Saks. 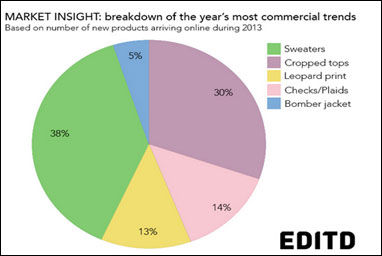 Trans-seasonal merchandising took a hold of retailers this year, and leather shone through as a good investment. Making its transition from luxury to mass market seamlessly, our commercial database accounts for nearly 92,000 new leather items coming online this year; 72% being womens wear. SS14 runway analysis gives a good gauge that this trend is sticking with us into the New Year.

One of the best selling types of leather garment in 2013 has been the biker jacket. With 17,566 new products introduced to the market this year, the shape has gone on to sell spectacularly (in both leather and other fabrics). The mass market owned this trend, with 62% of biker jackets retailing there. John Lewis came through as the real winner, with 10 different styles replenished at full price this year.

Kick started by Burberry's sweet wrapper feast of a collection for SS13, metallic fabrics have seen good movement across all markets. The majority of the year's bestsellers come from the premium market, with Jaeger London, Whistles, Ostwald Helgason and Topshop retailing metallic superstars at 100-365. But kudos to Boohoo, whose 12 metallic skirt sold out in 2 days.

With close to 94,000 influential online mentions this year, this is a trend we consistently saw on street style bloggers throughout the year. Teaming up with the cropped top trend, nodding to the sports luxe story and being a vital update to the denim category has propelled this trend further than Alexa Chung ever imagined. Zara, New Look, ASOS and Topshop are reaping the rewards of their well-timed actions.

A direct influence from the runway, printed trousers were picked up by the premium market at lightening speed, allowing them to showcase their access to delectable prints. With 8,061 new products arriving online during 2013, House of Fraser was the biggest retailer and Zara were the retail brand with the biggest assortment.

This article was originally published in Editd.com on 10th December 2013.