Center weft fork motion checks the presence of weft in each pick. It is situated at the middle of the reed. It is used for producing high quality fabric. Basically, it is used in modern conventional loom.

This motion has been designed to feel the weft thread every pick and stop the loom in case the weft thread breaks or runs out, no matter which way the shuttle is running at the time. The shuttle can be housed in any one of the boxes. 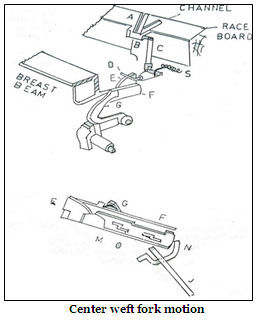 It is for this reason the mechanism is situated in the center of the race board. The loom is brought to a stop before the beat-up action takes place. It is not necessary that the shuttle should always be in the starting handle side box for affecting the loom stop. Therefore this device will not allow two missing picks before the loom stops. This device is useful for looms weaving pick and pick colored wefts. If there are two different colored picks weaving alternately and if one of the colored thread is broken, it is necessary to stop the loom immediately before another colored thread of the second pick is inserted in the shed. It also helps to weave faultless cloth free from pick finding marks or broken picks. With effective braking system, the loom can be stopped dead on the broken pick. In addition a device is incorporated to turn back the loom, opening the previous shed with a broken pick laid inside, so that the weaver can rethread without making any bad mark on the cloth. Centre weft fork motion is, therefore, suitable for weaving fabrics made of filament yarns, e.g. polyester, nylon and yarns made out of other delicate fibers.

Though several types of centre fork motions are designed the basic principle remains the same. A channel is cut in the raceboard, at or near the centre depending upon the length of the weft from the shuttle eye to the fork and also on certain attachments like pirn changing and box changing. The weft fork with prongs is fulcrummed on a bracket fixed to the front of the sley. When the sley moves towards the back centre, the fork tilts upwards through the warp far enough to allow the shuttle to pass underneath and the weft is laid under the fork. During the forward movement of the sley the fork drops downwards upon the weft and is held from moving further down in the channel by the grid effect of the warp threads belonging to the bottom shed, supporting the weft thread against the light pressure of the fork. In this condition the weft fork holds the knock-off arm away from the knock-off lever. The fork is pulled out of the shed just before the reed reaches the fell of the cloth for the beat up of the weft. If, however there is no weft underneath the fork as the sley moves forward, the fork drops into the channel in the sley and the knock off arm D is moved into contact with the knock-off lever G thus stopping the loom. One important device which is necessary in all the centre weft fork motions is to enable the loom to restart after the weft replenishment without the presence of a weft thread across the shed. This means that the knock-off arm should be made ineffective for the first pick without the help of the weft thread.

A shield has been provided in all such motions to enable the sley to move forward, on the first pick, without stopping the loom. On successive picks the shield moves out to enable the weft thread to act as a preventive device to knock-off the loom.

The center weft fork motion shown in figure has two important parts. The first part, the weft fork, is attached to the sley and moves with it. The second part consisting of, cam, knock-over lever, brake lever, the rod that connects the mechanism to the shipper lever, all attached under the breast beam, which is stationary.

The weft fork A is pivoted in a stud and is connected to a lever B pivoted in a bracket on the lower end of the stand by a connector rod C. An adjustable knock-off arm D which is connected to the lever B slides over the face of the cam E projecting from the breast beam assembly. The knock-off arm D is held against the cam face by a special spring S on the opposite end of the lever.

Immediately the loom is knocked-off, a flat spring J clamped to the shipper shaft pushed back the first pick shield through an intermediate lever N. Since the shield M is held by pins that follow the curved shape of the cam slots, a push at the back will enable it to rise above the top of the stand F and also above the top of the knock-off lever G. When the loom is started after the repair of the broken pick, the flat spring is moved away from the lever N but the shield F stays in position owing to the dwell in the cam slots. On the first pick the advancing knock-off arm, strikes the end of the cut out O in the shield pushing it forward into the normal position.