The Ever Evolving Burqa

Every country has its national attire and this attire, no matter, how surreal it may appear or sound to others, is treasured and often improvised as per the modern needs of the wearer. The curious mix of cultures has led to reinvention of these traditional attires. The simple burqa has also gone through some subtle and some noticeable transitions. With the revolution that the fashion industry has gone through, the burqas have become designer apparel. The prices, global production, demand and designs all have changed. An intricately handcrafted burqa sells for at least US $ 400 in markets around the world. Modern day burqa is not only culturally and traditionally appropriate, but also more adaptable, comfortable and well-designed. 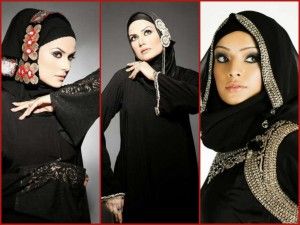 The need to keep the burqa functional and comfortable for the women even while they go about doing the daily chores has led to use of fabrics other than nylon. The colours and the designs have also been slightly altered to suit to the needs of the wearer. The issues like making the burqa more visible by using retro reflective patterns or weaving reflective yarns or threads into laces, trims or piping are being readily addressed. The low visibility of the wearer in ordinary burqas can result in accidents at night.

The wearers need reflective strips either stitched or glued on the burqa for the same reason as the joggers or night travellers need the reflective clothing for. Considering the temperature varitions in various countries, the fabric has also gone through changes. Silk, chiffon and even smart textiles are being used by the designers to ensure that the burqa, even though it covers the wearer from head to toe, keeps the wearer cool or warm, as per the requirement. Lighter and non-transparent fabrics including the thermo regulated fabrics that absorb the moisture are preffered over the nylon. Thermo-regulation can be applied even to the veil that covers the face and neck. The fabric and the system used in sports garments to keep the wearer dry will be relevant here as well. Including a polymer mesh or inserting a high density polyethylene mesh beneath the outer garment can also keep the wearer sweat free. Adding a pocket or two inside the burqa robe can also be handy.

The business concerning burqa has also changed. Not only Islamic countries, but countries like India and France are involved in burqa business. India has recently exported readymade garment burqa worth USD 4,570 with total quantity of 392. Sudan is the largest buyer of readymade garment burqa accounting for exports worth USD 3,844 followed by France and Maldives which imported readymade garment burqa worth USD 636 and USD 90, respectively. The average cost of readymade garment burqa per unit is USD 11.66 and average value per shipment is 1,523. The average price is also highly influenced by import duties in various countries. The import duty rate for importing burqa into India is 10 per cent, which is also subjected to minimum price of Rs. 116.00 per piece. The import Value Added Tax is 0 per cent, if burqa is classified under clothes for women. The import duties in Muslim countries also vary. In Pakistan most favoured nation (MFN) duty is 25 per cent, in Qatar the MFN rate is 5 per cent, in Turkey MFN duty is 12 per cent and 8 per cent sales tax whereas in United States of Emirates 5 per cent MFN duty is charged.

In India, the opulent Muslim community prefers burqas imported from Dubai. Spandex made burqas with gems or/and embriodery are in demand in India. Customised burqas that have precious gems on sleeves and zari work on back are also being purchased even though these are far more expensive than the regular burqas. These can cost anything between Rs. 1 lakh and Rs. 5 lakh.

In Afghanistan it has been reported that the burqa sales have witnessed a steep decline since toppling of Taliban. Thus, in Afghanistan, businessmen are increasingly coming up with the other styles of Islamic dresses to make up for the lost profits. The recent ban of burqa at public places in France followed by opposition to wearing a veil in other countries had a deep impact on global burqa trade. However, small burqa traders in countries like India, Pakistan, Bangladesh etc. are selling the handcrafted burqas in small quantities to Gulf countries, as it not only helps the small traders grow internationally, but also the high demand for burqa in Gulf countries help them earn high profits. Amidst all the opposition that burqa faces, it has been estimated that 600 Israeli women from Jewish community have opted to wear burqa, as burqa is considered a symbol of piousness by them. This has also resulted in design revival. Chinese burqas, which are a lot cheaper than the burqas manufactured in Islamic countries, have become popular and preferred choice in global market.

Burqa represents the religious belief and this makes it popular around the globe. Though this traditional dress has evolved considerably, but the basic concept remains unchanged. It certainly holds more significance today in terms of religion and comfort of the wearer. It is also associated with the way one appears and thus portrays ones sense of fashion. Burqa is not confined to few choices, as the markets are full of fresh burqa designs. The world of burqa is evolving without compromising on traditional values and this transition has made it far more rich and relaxing than earlier.