The ancient famous Indian temples give us an account of the varieties of dress as well as styles of weaving and wearing. Each region of India has its own textile tradition and known for the production of distinct varieties of material. Khana material is always produced by keeping definite width and length. Women in north Karnataka and some parts of Marathwada and Vidharbha regions in Maharashtra use this Guledagudd Khana.

The art of ornamenting handloom fabrics in India is an age-old traditional technique and custom from time immemorial. Although, India abounds with numerous types of costumes for women, saris and blouse have assumed a special importance and significance. Nothing identifies a woman as being Indian as strongly as the saris do. It is worn in many traditional styles. The Indian women attach greater value of sentiment to the sari and blouse. The Indian traditional handloom sari and blouse regains supreme among the beautiful costumes of the world. Its origin is lost in antiquity. The ancient famous Indian temples give us an account of the varieties of dress as well as styles of weaving and wearing. The saris and blouse is the one common garment of Indian women since ages.

History is the result of various forces and factors including geographical, social, religious etc. Each region of India evolved its own textile tradition and known for the production of distinct varieties of handloom saris. This handloom saris and blouse weaving industry is highly traditional, labour intensive, caste based mostly unorganized and decentralized. It employs a large number of women folk and thrives on inherited skills and patronage by rural population and connoisseurs of art.

Handloom industry occupies a prominent place in decentralized industrial sector of India. Handloom is the largest unorganized economic activity in India, next to agriculture. It is scattered over the entire length and breadth of the vast country, mainly in rural and semi-urban and partly in urban environments, providing employment.

Many clusters of Karnataka state is also home to traditional designs and intricate weaving methods. The more traditional saris of Karnataka are the Molkalmuru saris of Chitradurgaand and the Ilkal saris of Bagalkot. Weaving is supposed to have come to Ilkal around the 8th century AD and the sheer rustic look of the textile keeps it still popular. The traditional Guledgudd Khana (Choli or Blouse, elsewhere called Khana), which is only one traditional cluster making blouse fabric in India. It compliments to Ilkal saris as this combination is widely used, not only in the northern part of Karnataka but also in the Marathawada and Vidarbha regions of Maharashtra. While the aged ladies wear the Ilkal Saris and Guledgudd Khana in their traditional Maharashtrian style, the younger generations wear it in their modern fashionable style. As a result Ilkal Saris and Guledgudd Khana in their best combinations are used extensively in Urban and Rural parts of Karnataka and Maharashtra.

Be it a marriage or any big or celebration or ceremony, the combination of Ilkal Saris and Guledgudd Khana are widely used. This combination has been the treasure of beautiful, dignified, ultra-modern fashions of sixteen years old dream girls and that of sixty year old traditional dressed housewives too.

Today, famous traditional saris like Kanchipuram silk, Dharmavaram, Tie and Dye saris, and cotton saris along with the weaving of six yard saris, a blouse piece for length of 24 is also woven with required buttas and extra warp border just like in sari. These saris are branded as attached blouse sari. The saris and blouses are woven in the same colours of warp and weft. Hence the shade of blouse piece is very well matching to that of sari woven. When we look back the history of Guledgudd khana, it is well understood that weaving of blouse piece to suit every sari woven is not a new art but practiced since long.

The Guledgudd originated as a town place. During 1580 second Ibrahim Adilshai of Bijapur built a fort on hill. After few centuries people migrated from top to plain ground next to hill hence it is called as Guledgudd. There are other stories which are popular. The people came from various places to Guledgudd were of different castes like devangas, pattasalias, kuruvinshetty, muslims etc. They started weaving a typical type of cloths for blouse material. And these blouse pieces were then named as khanas. Whenever any pooja is performed in the villages of north Karnataka, they use to worship the god by keeping a sari with a blouse material over the sari. It is always folded in a typical triangular shape. Folding of blouse piece in the said typical triangular shape was traditionally called as khanas.

Khana (blouse) material is always produced by keeping definite width and length i.e. 32 inch X 20 inch. From each piece of khana a blouse could be stitched for ladies. The scale for measuring of this definite length of blouse piece is also traditionally called as khana.

There is no definite historical evidence as to when the handloom weaving industry started at Ilkal and Guledgudd. But according to the popular belief and circumstances, it might have started in the 8th century when the Chalukya Dynasty was in full swing in this region.

Most of the designs of the Guledgudd Khana are replicates of Suryanarayana: the face of Sun God, SiddeswarMukuta: the face of Siddeswar God, Theru: the Chariot, Ane Hejje: the footsteps of elephant, Tulsi Pan: the Tulsi leaf and Sooji Mallige: a fragrance giving flower etc.

In view of the importance and special craft style product is likely to be manufactured by domestic and overseas producers, in order to protect this craft style the product is brought under Geographical Indication act.

The production of Khana Fabric involves various operations. Thekhana has woven border on both sides ranging from 6 inches to 9 inches in width, with two to three stripes of extra warp figuring all along its length. The body is fully covered with extra warp along with ground figuring with dobby shedding mechanism.

The ground warp may be cotton, mercerized cotton, rayon or silk.Whereas weft is always cotton, single spun yarn with Z or S twist direction or mercerized cotton. However, the rich, lustrous and glossy appearance of extra warp is produced by either viscose rayon or pure silk is used. Of the yarns cotton is dyed with vat or naphthal and silk by acid locally.

Wooden lattice dobby used for producing the design on khana with extra warp, dobby capacity depends on type of design; normally in Guledgudd khana 5 15 lever cylinder type lattice dobby is used. Another type of dobby is grooved cylinder, i.e. according to design cylinder is grooved. According to the design, wherever grove is there, that particular lever is lifted; no need of lattice and pegs. This dobby is used for smaller design. Nowadays these khanas are also manufactured using power looms. 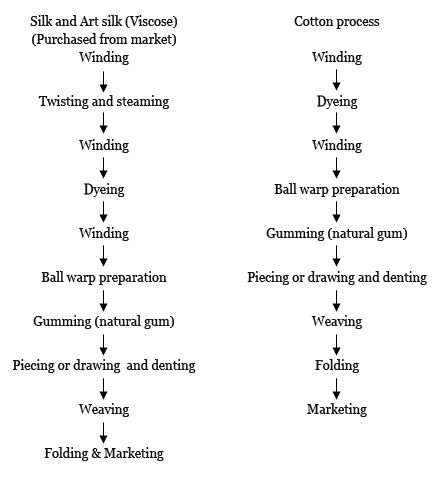 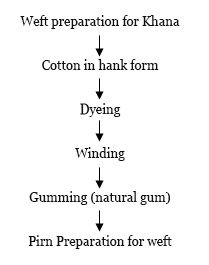 The unique designs produced by using dyed yarns represent the traditions followed by people of some regions of Karnataka and Maharashtra states. The motifs used for the designs are extracted from nature, ancient stone sculptures of Badami and the Hindu Mythology. These designs are well accepted by the people in this region and they have a strong belief in them. These Khana materials are so popular that, except these traditional designs no other designs are accepted by the users of Khana. The design names and their meanings is explained in the below table.

Women in north Karnataka and some parts of Marathwada and Vidharbha regions in Maharashtra use this Guledagudd Khana as blouse material in combination with Ilkal sari. The speciality of this material is unique design and the raw material used being silk and cotton. Silk being natural fibers possess special properties like high moisture absorption, good luster and comfort to wear. The extreme hot climatic conditions in these regions made these people wear this Khana. Because of the high cost of silk, the Khana materials were also produced in combination with cotton as weft. Later the man-made fibers like viscose rayon, cuprammonium rayon and polyester fibres were also introduced. Nowadays, khana is utilised for different products with modifications.