Indian textiles should not stop just at 'Make in India'

India has more traditions, history and stories woven into its textiles than there are in our exports. Like we promoted India as 'Incredible India', we need to promote textiles from India as the costume of gods and royals. This is one sector where we can actually produce branded products which are high up in the value chain and don't just position us as a cheap sourcing hub. And there should be an International Khadi Day too, writes Anurag Batra.

Indians are too enamoured of Hollywood. We can't help it. We have been conditioned this way. The collective self-image of Indians in contrast to that of Americans is deplorable to say the least.

Many would say we are shy, unsure, easy pushovers, our personalities riddled with complexities, feelings of inferiority. We've battled this as a race for so long now that it is deeply engrained in our system. We ourselves have come to believe that it's true. It has become our basic nature.

When the world is searching for more Indianness, when Gandhi undeniably has a stronger brand value than most, when India is seeking its rightful place in the world, should we not exponentially scale up our ambitions for what we want the world to wear? 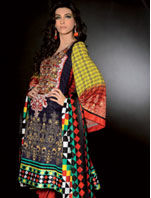 We have more traditions, more history, more stories woven into our textiles than we have in any of our exports. We have the Assam silks, we have the silks from down south, we have the pashmina, and we have the khadi - a fabric synonymous with Gandhi and, hence, world peace.

Like we promoted India as 'Incredible India', we need to promote textiles from India as the costume of gods and royals. With Narendra Modi's 'Make in India' push, this is one sector where we can actually produce branded products which are high up in the value chain and don't just position us as a cheap sourcing hub.

The costume of each Indian state and its fabrics itself can be a brand in itself. All we need is a yoga moment for Indian khadi and textiles.

But why has this moment not happened yet? Some would say if there was any possibility of it happening, it would have happened by now. It's been 68 years since the khadi movement took off. But nothing!

At the back of our heads, at some level, unless something is authenticated by international standards, it cannot be good enough. The brands we wear - Marks & Spencer, Tommy Hilfiger, Gant, Nautica - are all household names. I wear most of these brands.

Apart from the fact that these brands offer a wide colour compass, on-trend designs, great cuts, stitching and amazing recall value; we believe it takes us closer to being cool, being American and being with it. It's not just a function of brand pull.

However, I write this one day after the world celebrated International Yoga Day.

Should not there be an International Khadi Day? Should we not celebrate and popularise and internationalise the purity, richness, appeal, and uniqueness of Indian textiles?

In terms of advertising, research in the psychological phenomenon of 'Classical Conditioning' proves celebrity endorsements provide opportunities to heighten the appeal of an advertisement and the product. When celebrities endorse a product, they transfer some of their own personal traits and values on to that product.

To my mind, one simple reason why our youth has not taken a shine to khadi is because they associate it with Indian polity. This is a case of Classical Conditioning gone wrong. In our mind, our celebrities are not heroes, they are villains. How can something which has relentlessly disappointed for years all of a sudden be a reason for adulation? When resentment towards Indian polity will subside, the perception towards things associated with it will change.

Invariably us Indians would not recognise our potential, strengths and gems unless someone 'cool' (which sadly means Westerners in most cases) points it out to us. And then we struggle and fight to reclaim what is ours. It's a shame really.

I think it'll have to be a funnel approach. Perhaps, identify some admirable people, have them endorse khadi, and let the effect trickle down to the masses. I'm totally in favour of a khadi day!

But above all, khadi is a brilliant fabric. It's made from cotton - a crop grown indigenously and in abundant supply, it's organic, it can be printed on, it can be woven with other fabrics to create variants such as khadi silk and khadi wool, it encourages rural employment. Surprisingly, it keeps the wearer warm in winters and cool in summers, and we're clearly the masterminds behind its construction; so, we've been able to experiment widely with designs, styles and colours.

Many brand experts say that the market will soon be dominated by brands that have an ethical value that give back to nature and encourage conscious living. The world is already moving in that direction. Artificial is being ostracised and natural is being recognised. It is a positive movement, albeit slow, one that holds the promise of salvation.

There was another movement many years ago. It was fuelled by Gandhi and it castigated foreign goods. That was an extreme. We stand on the other end of the spectrum today. How many people are wearing locally made garments today on a daily basis? Look at the clothes you are wearing right now. Do a self-assessment.

When it comes to Indian textiles we should not stop just at 'Make in India', we should make it 'On the world scale'.