Looking ahead: The Digital Revolution

Israel-based Kornit Digital develops, manufactures and markets industrial and commercial printing solutions for the apparel and textile industries. Kornit caters directly to the needs of both designers and manufacturers. Founded in 2002 by seasoned professionals with extensive experience in the digital printing industry, Kornit provides its customers with a complete digital printing solution, from start to finish. Gabi Seligsohn, CEO of Kornit Digital, explains the importance of state of- the-art textile printing technology.

The digital revolution has impacted, transformed and - in some cases - even eliminated entire industries. The compact disc meant the end of magnetic tapes and enabled lossless reproduction of music, with or without the blessing of the record labels. The entire value chain of printed media and newspaper production has been completely shaken up in both production and consumption. Nobody uses printed maps anymore; GPS systems and digitised maps have become a commodity. These changes have always proven beneficial to the fast movers, and to business leaders that were ready to accept and master the change. The companies that stuck to old-fashioned business models and conventional technology, however, have usually either suffered or do not even exist anymore.

A few years later, the same process is now taking place in textile printing, and this has never been more obvious than in this ITMA year.

When I joined Kornit Digital in April 2014, I immediately recognised the opportunity to join a major player in one of the strongest growing markets of today. 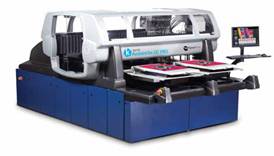 Textile printing is a mature industry with the relevant textiles for Kornit Digital being those which are either wearable or for home decor. At present, the global textile market as a whole is worth annually around $1 trillion. Of that amount, $165 billion represent printed textiles. The dominating technology in this market is screen printing which admittedly has its cost benefits in mass production and large print runs. On the other hand, it imposes significant limitations to the new and creative business models of today, such as e-commerce applications and short to mid-size runs of particular designs with a high variability of the media being printed upon.

With screen printing, the set-up process is very lengthy and costly, and it requires customers to order large quantities of a single design. The minimum order quantity is usually in the thousands if you want to manufacture at a competitive price. On top of that, the production is too often a burdensome and dirty process with negative implications for the environment.

There are three elements that drive the need for change right now:

•         First, on the demand side, customers and consumers are increasingly looking for customised fabrics and garments. People want to express themselves with what they are wearing or what they are dressing their houses or offices in and want to appear unique.

•         Secondly, if you are screen-printing, your sweet spot is printing large quantities of the same design, which poses a challenge in today's supply chain dynamics. Decorating tens of thousands of garments by means of screen printing can be very cost efficient, but where do you store them between production and the counter in the shop? What happens if you find out that your design is not selling quite as fast as you expected? What if part of your collection is selling well and you run out of a particular item and are not able to replenish that item quickly enough?

•         The third element is environment. The World Bank states that around 20 per cent of industrial waste-water comes from textile mills. China and many developing countries depend on the textile industry as their main source of living, and the western world has relied upon them as their work bench which does what is needed. But environmental pressures mean that changes have to be made.

All of these aspects are connected to a financial implication, and the single largest weakness of the textile industry is probably inventory management.

The conventional method of sourcing textile takes between 21 and 25 weeks. So, if you are a designer somewhere in the world, you need a very good crystal ball to look into the future. You might be putting together a collection of ten different designs that you present to retailers from Hong Kong to New York. But, by the time the finished garments reach the shelves, many things will have changed. You cannot predict which of those ten items is going to be a "home run" and which is going to be a slow mover, resulting in over- or under stocking. By the time you can react, the season is over. For that reason there has been the advent of 'fast fashion'.

I think the best example of fast fashion has been Inditex, owner of Zara and several other brands, with H&M and Mango also following suit. They are changing the concept by moving to smaller quantities. They are running a major part of their manufacturing close to the point of sales, doing so even in Europe which is generally known to be much more expensive than Asia. They are able to do this very successfully and cost effectively. A study carried out some years ago by Harvard University demonstrates the difference between fast fashion and traditional retailers. The report analyses the percentage of marked down revenues and the number of garments that are marked down versus the overall goods sold. For a traditional retailer, about 40 per cent of revenue comes from discounted products and some 60 per cent of the items manufactured are sold with a discount.

However, in the case of Zara, the numbers are very different. The study shows that only about 20 per cent of revenue comes from discounted products, and only 15 per cent of the items manufactured are being marked down. Not only are the financials better but what they are actually doing is creating scarcity of supply. They want the shoppers to frequent the shop, several times a season; and what the shoppers want is to be unique. People don't want to be seen wearing something that someone else has purchased somewhere else. And so if we look at what is happening now it is a real change.

Another trend that we are seeing is online shopping. Instead of having someone frequent a store front, a lot of the business is moving online. As a result, rather than stocking larger inventories of particular designs, now manufacturers are able to store blanks without actually putting a decoration on those items until the very last minute, and until they know that there is demand for that particular design. 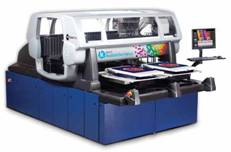 The fixed cost element is very high with traditional production. Digital equipment moves most of the cost to variable cost and allows minimal investment in facilities, employees and energy consumption and unleashes an ability to react quickly to surges in demand. These days a lot of demand is generated through social networks and via the Internet in general. Both represent a very fast growing market which is quick to respond to every market trend.

For example, some of our customers focus on sporting events. You have no idea who is going to win the finals of the NBA, but you know for sure that the next day five million kids are going to want that team's shirts. How are you going to react if your production is in China? You must have a large inventory of blanks available in the relevant region that you are looking to serve.

Out of the $165 billion worth of printed textiles, only about 5 billion to 10 billion garments and about 950 million square metres of fabrics were manufactured digitally in 2014. Overall that represents a penetration level of about 2 per cent for digital which essentially means we are just at the beginning of the digital revolution.

Digital delivers by providing an agility and ability to react very quickly to the demand for smaller quantities. Garment decorators and textile printers no longer need to turn down customers wanting low volumes because the set-up process would have been too lengthy and the amount of revenue associated with an individual job would not have been enough to justify the set-up cost and time.

Many technology vendors have introduced technologies and workflow approaches that further enabled mass customisation business models, one of them being our own inline pre-treatment.

In order to be able to print on a garment, users typically need a pre-treatment process which first deposits a liquid, then requires to be run through a heat press and a belt dryer and only then can it be printed and subsequently dried. Recent innovations have encompassed all of that pre-treatment process into the printer. This allows the removal of the separate process, which is very cumbersome, needs more labour, takes a lot more time, costs more per garment and is both energy and real estate intensive.

Still, the paradigm shift that is enabled by a new technology means an impact on your daily operations. When people bring a digital system online, it takes some time until they reach capacity, not just because it takes some time to learn how to use the system, but also to grow their businesses. Typically we see systems running at capacity usually 6-12 months after they have initially been purchased.

There are a lot of solutions in the market, from remodelled inkjet printers on the low-end to heavy-duty, industrial direct to- garment systems at the professional end. Kornit starts at the high end of the entry-level segment and most of our focus in the last few years has been on the high throughput high volume part of the market. We will focus our road map on continuously adding applications, on productivity, continuing to improve cost of ownership and adding more functionality through software capabilities. We sometimes split our market into four distinct customer types - custom decorators, on-line businesses, contract printers and brand owners. Most of our business has been coming from custom decorators and online printers so far. The next frontier will undoubtedly be the brands and large retailers as they continue to transition to fast fashion and realise the potential benefit of moving to digital.

Though this will require them to make changes to their supply chain which will undoubtedly take some time, we believe the benefits are too significant to be ignored.

For the future, we see digital adoption rates continuing to increase. Research from World Textile Information Network shows that the overall digital adoption over the next four years is expected to grow at a rate of about 19 per cent while traditionally printed fabrics should only grow at 2.5 per cent for the same period. 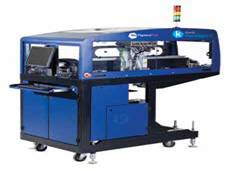 Interestingly, direct-to-garment printing has grown and is expected to continue to grow by almost double that CAGR for the same period. We believe that this high rate of growth is associated with the fact that direct-to-garment printing deals with finished products and is directly accessible to the consumers while fabric is a "work in progress" product. Digital fabric printing is a market geared towards "professional consumers" and as such, its growth very much depends on further evolving a business model suitable for these professionals.

We expect the trends of fast fashion and mass customisation and personalisation to continue and gain momentum. Textile has been known as the leading mass customisation market for the last several years. Advancements in print head technology, ink chemistry, system integration, application development and workflow, as well as the integration of all these elements together, should help drive printing cost down and by doing so will increase mass production reliance on digital printing as a key technology.

We believe screen printing is here to stay but we have a strong sense of conviction that the transition to digital will continue to expand for all the right reasons. As was aptly stated in the past: Whatever can go digital will go digital.