How logistics furiously reinvents itself

Current trends and futuristic ideas from the logistics industry would seem like the stuff of science fiction. But, as Regina Henkel reports, the future may be stranger than fiction.

Whether a parcel is delivered by drones through the air, or in special tubes under the ground, the latest ideas for package delivery read like that from a science fiction novel. In fact, the logistics industry is reinventing itself: with the help of package drones, which find their way to isolated villages or in clogged cities easily, with an underground tunnel network, especially made for mail, with trucks that produce ordered products with a 3D printer themselves, and so on. Many of these future models are being contemplated by online giant Amazon. CEO Jeff Bezos has articulated logistics as a top priority, pushing the issue ahead worldwide.

The future is lying in the air

Many of these ideas, of course, are still in testing phases. But plans for the Prime-air drone that Amazon is trying to install are far more mature than experts had expected. The online retailer will not simply deliver only packets with flying quadrocopters, it also wants to build a complex supply network, deliver to any potential recipient no matter where they reside. Also, the setup of supply- and recharging-stations for the drones is part of the vision.

It's not only Amazon that will be relying on drones. Deutsche Post has been experimenting with this for years now. In a pilot project last year, its small 'Paketkopter' made medicine deliveries from the mainland to a pharmacy on the island of Juist in the North Sea. The flight succeeded even in darkness, rain and fog-conditions under which an aircraft cannot ordinarily fly. Swiss Post too has run tests and supplied remote villages with medication by drones. Despite these successes, experts are sceptical whether a drone is a serious delivery option. A sky full of drones could fail through the legislature although Amazon has reached an agreement with the US Federal Aviation Administration for a pilot project with an altitude of approximately 400 feet. Moreover, the economic viability of drones is not yet proven.

Race is driven by logistics, not consumers

But why are online retailers such as Amazon or Alibaba so insistent on drones? Why invest so much capital in the development of new delivery models, if customers are satisfied? Daniela Zimmer, responsible for the programming of the Internet World Congress in Munich in March 2016 which will focus among other things on logistics trends in e-commerce, said: "Recent research shows that it (the delivery) satisfies a customer when the order arrives within three days. Same-Day-Delivery, which is possible with drones, is primarily a forward-driven issue by logisticians." It is not without reason, say some experts, that online retailers like Amazon are trying to set their delivery service partners under pressure from their own logistics projects. But that's not all. Even the threat of gridlock has been cited repeatedly over the years in order to show the negative effects of e-commerce.

The fact, however, is: there is no traffic jam caused by e-commerce yet. However, forecasts say that by 2018 the package volume each year will increase by at least four per cent. At the same time, rural exodus will continue. By 2050, 84 per cent of Germans, for example, will live in cities, a forecast of the United Nations revealed. It is therefore to be expected that urban infrastructure soon must come to terms with a much higher volume of traffic than that at present. This is a key reason for the logistics sector to look out for new models for the future.

But drones are not the only ones in this colourful pool of ideas of the logistics sector. Take, for example, the package pipeline in Great Britain. In cooperation with DHL and funded by the British Ministry of the Environment, Mole Solutions from Cambridge has developed an underground tunnel system whereby the packages float in capsules on a magnetic field. The first of these pipelines are to be installed in Northampton. If the pilot project is successful, in a few years a nationwide underground pipe system could traverse across the UK.

Another model for the future is trunk delivery, which has been tested in Germany by DHL in cooperation with Amazon and Audi, as also Hermes in cooperation with BMW. The idea to deliver packages through the trunks of parked cars is not new. In the B2B sector, the system has been in place for a long time. Miele technicians get their parts directly in their trunks, delivered by TNT. Another patent of Amazon which, however, has found far less media attention than the drones is the so-called anticipatory shipping. "Unlike the drones, many experts consider the model of anticipatory shipping to be really sustainable," said Zimmer. 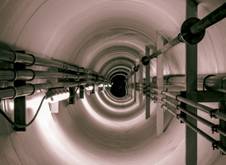 In keeping with trends, this idea is associated with Big Data: goods without concrete orders are provided on truck as travelling camps in a region where these goods are ordered often or soon according to data analysis. This helps shorten delivery times dramatically. Amazon will even deliver products before the customer has ordered it-the knowledge of this is based on the click history and the buying behaviour of customers. For instance, a person who has so far always ordered new publications by a specific author will in the future be supplied automatically by Amazon. It's as amazing as that!

In fact, Amazon can imagine even more in terms of logistics. Another Amazon patent describes a truck with a 3D printer, producing the goods ordered during its cruise. While there are still many technical problems in implementing this idea, the intended target is quite tempting. Deliveries could be made more quickly than ever before, and the logistics costs would still decline-finally the raw material for 3D printing can be stored and transported considerably easier than the bulky finished product.

When it comes to e-commerce logistics, things are changing rapidly right now. And, for sure, it will also impact the fashion business as also the relationship between traders and consumers. It makes sense to keep these developments in mind.