The card is the heart of the spinning process. Only with effective carding can the spinner produce homogeneous, regular, resistant and clean yarn. Check out the latest model of Marzoli's card, the C701.


The card is the heart of the spinning process. Only with effective carding can the spinner produce homogeneous, regular, resistant and clean yarn and therefore ensure efficiency and quality in downstream operations.

No machine in the spinning mill can overcome defects that arise from carding. That makes it necessary that the card can properly select, open, clean and parallelise fibres without damaging or weakening them. 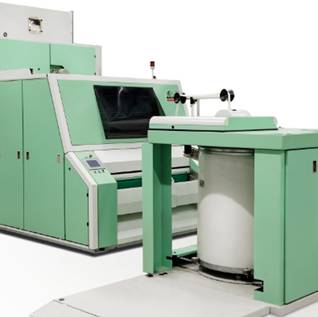 Carding technology has become even more important with high production requirements. Times when spinning mills had several cards running at 20-30 Kg/h are over. Modern competition requires producing impressive quantities of yarn to minimise average cost per kilogram. For the card, increase in production can have serious effects on quality of output. Therefore, technological innovation has become fundamental to meet the increasingly demanding requirements of contemporary competition.

Marzoli C701 showcases the advancements made by the Italian textile machinery leader in carding technology. 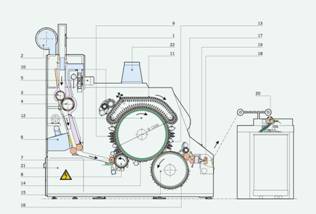 Raw material is supplied via pipe ducting and enters the card by falling into the feed inlet (1). The raw material accumulated in the pre-chute chamber is then clamped between a feed roller (3) and a feed table and is delivered to an opening roller (4) that delivers very fine tufts to the batt formation chamber. The batt is then delivered to a feed device which has a feed roller (7) and a feed table that convey the clamped material to the licker-in (8). After passing through a mote knife and two carding segments that remove impurities, material is delivered to the main cylinder (12) and is processed by six carding bars and two mote knives in the pre-carding area (9). The main carding zone (11) comprises 90 mobile flats, 32 always in working position. The post-carding area (13) comprises two mote knives and four carding bars to clean and parallelise fibres further. Material is then delivered to the doffer (15), the web detaching device (17) and the sliver formation area (18). The sliver is then coiled inside 40" cans.

Although the carding principle is still the same of that of previous models and of competitor machines, figures 3, 4 and 5 testify substantial improvements in productivity and efficiency. Compared to the previous model, Marzoli C701 allows increased production under the same quality level of up to 50 per cent and reduction of energy consumption by up to 30 per cent. These results have been achieved due to technical innovations in the feed chute and carding area, allowing for better opening of feedstock and more effective carding of material. 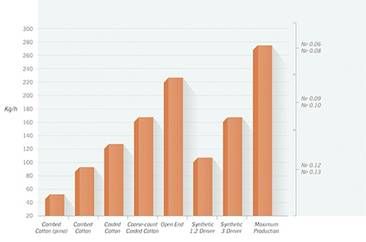 The feed system is of utmost importance for the consequences it has on sliver regularity and machine productivity. An even sliver can be obtained only if the feed batt presents perfectly even distribution of tufts. High production requires that the feedstock is perfectly open.

The feed system of Marzoli C701 is a two-piece chute with an integrated opening system. Material enters the pre-chute feed chamber (the reserve chute) (4) and is then delivered through a feed roller (5) that seals the upper half of the feed system to an opening roller (6) which plucks the clamped material and delivers very fine tufts to the batt formation chamber (8). The compressed air introduced directly in the batt formation chamber leaks through the perforated steel sheet (9). The airflow ensures that the tufts are carried in the zone where the perforated steel sheet is currently least covered. This entails perfect uniformity of the batt along its entire width. An electronic pressure sensor (12) guarantees constant pressure of feedstock. If feedstock becomes too heavy, the tufts would compress and this would yield irregularities in the sliver. This pressure sensor controls the feed of material to the batt formation chamber by adjusting the speed of the feed roller (5).

The described technology, with the auto-leveler that adjusts the speed of the feed roller according to the batt width, guarantees the delivery of a perfectly open and even feed batt to the licker-in. 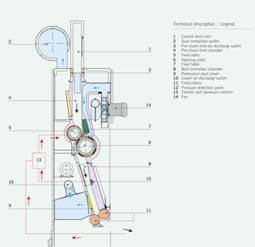 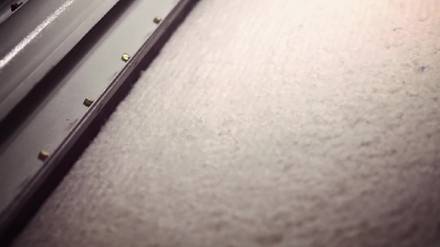 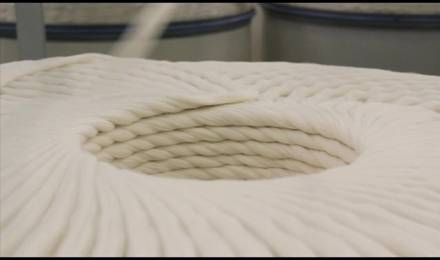 One of the main objectives of a card is to open the fibre material and remove impurities within the feedstock. In the card, the working organs that mostly contribute to the achievement of these objectives is the licker-in, a cast iron roller with saw-tooth clothing that plucks the feed batt in very small tufts and cleans them, thanks to carding segments and mote knives.

One of the peculiarities of Marzoli C701 card is the small diameter of the licker-in, which must thus rotate faster to keep desired peripheral speed. This grants greater centrifugal force that, in combination with the knife and the carding segments positioned underneath the licker-in, contributes to very effective elimination of dust and trash.

It is argued that to achieve desired degree of opening in the card, several licker-ins are necessary. Actually, the opening of the raw material in the card to individual fibres is carried out through a draft effect between feed roller and main cylinder that is not affected by the number and the dimension of the licker-in. In fact, the draft is always and only the ratio between the delivery speed and the input speed. Intermediate rollers do not affect the final draft whatsoever.

The draft between the feed roller and the main cylinder of Marzoli C701 Card is very high (800), ensuring perfect opening of the fibre mass. This adds to the high cleaning performance of the licker-in, which does not alter the draft effect.

The problem of boosting productivity on the card stems from the fact that, to increase production, the card must process greater amounts of material and therefore open up more feedstock in the time unit. The opening effect is usually represented by the number of fibres per point, i.e. average of total fibres fed in per unit of time over the number of points available in the same time. Increase in production levels would require proportional increase in number of points available in the time unit and this can be achieved in two ways: Higher roller and cylinder speeds and more carding surface.

Increasing roller and cylinder speeds, however, would go to the detriment of quality. Due to already high speeds of these working organs, further increase would provoke too much stress on fibres and on the clothing of the carding flats. All major textile machinery manufacturers have therefore opted for the second option and have revised the geometry of their cards. 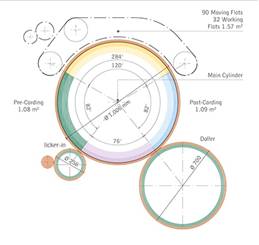 In Marzoli C701 card the main cylinder has been raised and the licker-in and the doffer placed underneath. This entails a carding angle, i.e. angle between the centre of the licker-in and the centre of the doffer, of 284�. This large angle, the diameter of the cylinder of 1 meter and the working width of 1.5 meters entail carding surface of 3.74 sq m, one of the greatest carding surfaces in the world. This reduces the number of fibres per point.

The core of a card is the area of the revolving flats. It is in this zone where the tufts are opened into individual fibres, where raw material is parallelised, impurities and neps are eliminated and short fibres are removed. It may appear logical that with a higher number of revolving flats, quality can be enhanced. However, this is true only partially: as elimination of waste can be done only by filling the clothing of revolving flats, after a certain amount of processed fibres, the flat loses its functionality and needs cleaning. This means that the quality of the card sliver keeps improving until a certain number of revolving flats in working position; over this number, quality does not improve because the flats closer to the licker-in are so filled with short fibres and impurities that they cannot card anymore. Marzoli has identified this number in 32 carding flats and has thus equipped its C701 model with 90 mobile flats, 32 of which are always in contact with the cylinder.

The fibres, after having been carded, must be transferred from the main cylinder to the doffer where they are condensed into a web. However, as the clothing of the two rollers are arranged relative to each other in the carding configuration, transfer of fibres is not easy and the material usually rotates several times on the cylinder before passing to the doffer. On one hand this is an advantage as it fosters fibres blend. On the other, it negatively affects sliver evenness. It is therefore necessary to foster fibre transfer and to do this the cylinder and the doffer must be as close as possible to each other.

In Marzoli C701 card, the distance between the two rollers is the minimum mechanically achievable and the transfer of fibres is also fostered by their large contact zone enabled by the big diameter of the doffer.

Marzoli C701 includes all the features of modern high-performance cards and thanks to its innovative geometry, represents a technological benchmark to fully satisfy the drivers of modern competition. 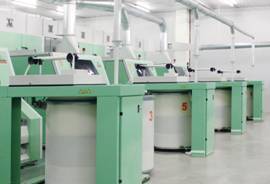