Dots and lines can make garments that suit the wearer 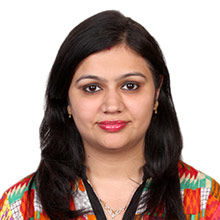 Design is a creative endeavour to meet the needs of its executers and end users, says Ankita Sodhi.

A product is developed according to a planned layout that should result in a functional and aesthetically pleasing outcome. When a designer works on a design for a garment, thought has to be given to make the garment appeal to the target client. It is essential for the designer to keep in mind the psychographics and demographics of the wearer.

So when a motif, design or silhouette is visualised as a component of the final garment, the aim must be to give the wearer a well-composed and suitable appearance by experimenting with various elements and principles of design.

The elements of design are the building blocks of any design. Compiled skilfully, they create effective visual communication.

The elements of design discussed are:

-->         It is the smallest and the simplest unit suggesting its presence.

-->         The size of dots in a design is not related to any kind of illusion of height or length in any garment.

-->         Larger dots create an illusion of increased surface area, making the wearer appear to be wide. So, larger dots are suitable for slim people and inappropriate for those with a heavy body type.

-->         Small dots look best on people with a wide and heavy body structure as the dots have a smaller surface area and create an illusion of slimness. They have the added advantage of looking good even on slim people. 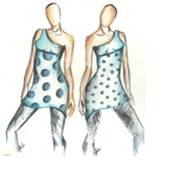 A line is a versatile mode of expression. Its various qualities evoke different feelings and each type has distinguished significance.

Various styles of lines are:

-->         Vertical lines: These relate to the length of the garment and give an illusion of height as the eye of the viewer runs from top to bottom, concealing the width of the wearer. So, vertical lines are suitable for the heavy body type and for those who are short.

-->         Thin vertical lines: These are explicitly suitable for heavy people as well as wearers with an athletic built. They have come to be associated with a strong personality, and so, they are used mostly for formal wear.

-->         Broad/Thick/Dominating Vertical lines: These are not suitable for a person with a heavy torso as they highlight just what needs to be concealed, but they can be worn by a petite person as they give an illusion of height. The outcome may be a masculine look, so they are more suitable for men's wear. 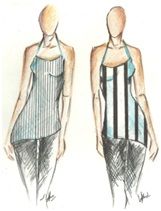 Horizontal lines: Running across the body, horizontal lines widen the look of the wearer as the eye of the beholder is guided across the width of the body rather than the height. Horizontal lines are inappropriate for people with a heavy body type, but suitable for a slim tall person who wants to distract attention from height. 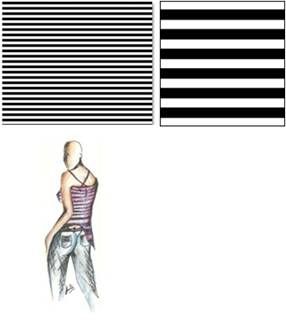 -->         Diagonal lines/ Zigzag lines: These lines are highly kinetic in appearance and would suggest liveliness and movement. Diagonals and zigzags can be used to create a focal point in an area of a design or a garment to highlight it, while concealing others. These lines are very striking and easily capture the attention of the onlooker. They counter natural curves. Credited with creating a masculine look, they are more suitable for menswear.

-->         More horizontal diagonal lines: These would give a widening effect so they are not suggested for a short or plump person.

-->         More vertical diagonal lines: These would give an illusion of height and slim build, so they are suitable for a squat person. However, these lines should not be used in an area which is to be hidden. A slim person may look more slim in these lines. 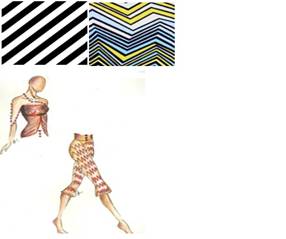 Perpendicular lines: These lines are bold and eye-catching, useful in making a blank, large area in a garment or design more exciting and conspicuous. They counter roundness and conceal flab.

-->         Dotted or slashed lines: These lines are more attractive than regular, continuous lines. These break the monotony in a design, making a basic outfit more interesting and attractive.

-->         Curved/Undulating/Spiral/Wavy lines: Graceful and elegant, these lines create a feminine look and emphasise roundness. So, they are not very suitable for the skinny wearer. These lines suggest fullness and are used frequently in sportswear to counter the masculine look of the sportsperson.-->