The malkha fabric is immensely appreciated for its unique qualities-the swing, the drape, the ability to breathe, to absorb, to hold colour. The fabric is catching the eye of many a designer, and production has jumped four-fold in the last five years, writes Sudha Passi.

Using the "strength" of Indian textile production traditions from the field to the fabric stage, malkha is capturing the fancy of its producers and wearers alike as a successful business model and a sustainable handloom textile.

Combining the softness of mulmul and sturdiness of khadi (traditional varieties of textiles), malkha fabric is immensely appreciated for its unique qualities-the swing, the drape, the ability to breathe, to absorb, to hold colour, say people who are involved in its production and fashion designers who have introduced it on world stage in the last couple of years. And it is not just for the high and sophisticated sections of society.

The growing popularity is reflected in its production which has risen nearly four-fold in the last five years from 2,500 metres per month in 2010 to around 8,000-10,000 metres per month in 2015. It is expected to reach 40,000 metres per month by 2017, says Uzramma, the septuagenarian doyenne of Indian handloom textiles, who has been assiduously involved with the Malkha Initiative (textile chain) in the Andhra-Telangana cotton belt since its inception in 2003. As malkha production is scaling up, it is foraying into womens', mens' and childrens' garments, which were shown for the first time at its Bengaluru show in December.

"It's in the embryonic trial stage only," Uzramma says. "At present, our main buyers are in the middle and upper middle income segments in different regions," she says, adding that "rather than the masses we look at market segments differentiated by region as well as by income."

In the wake of rising demand and appreciation of the product, the Malkha Initiative has steadily increased the number of weavers and other pre-loom processors it engages with. Currently 100 producer families are engaged in the process. In the next two years, this number is expected to increase to around 400, according to Uzramma.

Given that there is a Malkha Marketing Trust that ensures successful marketing of the entire production, the figures on expansion and production assume significance as a veritable indicator of product popularity and consumer taste veering towards sustainability, quality and value for money. For a fabric that is considered to be summer-friendly, malkha has a unique capability of keeping the wearer warm in winter, points out designer Shilpa Reddy, who chose it to showcase her collection at the prestigious J-Autumn Fashion Show at Eiffel Tower in October 2014. Shilpa says malkha was her natural choice as it was 'springy, breathable handwoven'.

Malkha addresses two huge fashion trends-sustainable production; and the whole notion of fair trade and nurturing ancient crafts and ways. New York-based fashion designer Peter D'ascoli is reported to have said giving his reasons for being attracted to the fabric. Interestingly, Uzramma says all sales are domestic. "We do have foreign buyers, who buy through local agents," she says, adding "we do not target exports or the elite. It is they who come to us."

"For a product to be successful over a long term it must have a specific identity," says Uzramma, shedding light on the Malkha Initiative, a unique decentralised, sustainable, cotton textile chain, collectively owned and managed by the primary producers-farmers, ginners, spinners, dyers and weavers. It was conceived with an aim to make yarn specifically for handloom and to rid the artisanal textile chain of its dependence on large spinning mills that distort the small-scale, village-based nature of handloom cloth-making. The initiative prides itself in managing to do so with the help of what it calls a "revolutionary" carding machine that enables yarn production at the village level and makes spinning a rural occupation.

The portable carding machine takes the cotton from the grower and separates the trash from the fibres right there. The fibres are fed into a draw frame where they become yarn. The yarn is then bought by weavers from the neighbouring village who produce fabric out of it.

The malkha process, thus, does away with the money and energy-sapping processes of baling, transporting and unbaling the fibres before feeding them into spinning mills that are located far away. This is not only ecologically sensible, but also allows the malkha yarn to retain the absorbency, bounce and lustre that is natural to cotton. 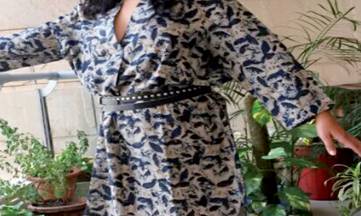 Thus, it is least damaging to the intrinsic properties of the fibre. The yarn produced by malkha spinning is either woven into kora (non-dyed) fabric, or saree or dupatta on handloom or is dyed before being handwoven into a coloured cloth or saree.

Another USP of the malkha fabric is the use of a variety of plant-based dyestuffs that cause no environmental pollution. A variety of plant-based products go into the dyeing of malkha yarn: Indigofera tinctoria for indigo, Acacia catechu for brown, Terminalia chebula (harda) and Punica granatum (pomegranate rind) for yellow, and Onosma echioides (kasimi) for grey. Red, made of non-toxic alizarin, a by-product of coal tar, is the only malkha dye not of vegetable origin.

Printing of malkha cloth is done using blocks carved out of seasoned teakwood. For natural dye printing, the cloth to be printed is prepared by mordanting with harda, dried in sunlight and then washed. Malkha has thus managed to address the key concerns on sustainability and preservation of traditional knowledge in an "authentic way", as D'ascoli observes.

Just five years ago, Uzramma was reported to have said, "We are going to rule the world of cotton textiles. The way we make malkha is energy-saving, eco-sensitive, socially responsible, and produces good clothes. What more do you need? We are going to change the world."

No doubt malkha has managed to change the perception of the world towards sustainability of the handloom with a specific identity. However, when asked if handlooms alone could cater to mass demand, she says, "There is room for both the powerloom and handloom just as there is room for different kinds of biscuits, or wines. Each biscuit or wine is liked for its particular taste, rather than as an imitation of another. Powerloom fabrics must develop a distinct identity and be marketed as powerloom."