Kota Doria is a handloom cotton fabric known for its weaving style that makes the fabric translucent and light. Airy and comfortable, it makes a good choice for summer and its softness and transparency lend it grace, maintain Kavita Chaudhary and Suman Pant.

Masuria, which refers to the city of Mysore, is the place where the weaving of Kota Doria originated. The finest checks resemble the masur or red lentil seed. Weavers of Kota Doria were taken to Kota in Rajasthan by Rao Kishore Singh, a general in the Mughal army, in the late 17th and early 18th century. That is how the saris came to be known as Kota-Masuria.

Each khat in these saris has 14 threads of which eight are of cotton and six are of silk yarn, both in transverse and longitudinal directions. So, the number of ends and picks per inch can be ascertained resulting into 2400 cotton and 1800 silk yarns used in warp. Nowadays, you also get a mixture of 70 per cent cotton from Coimbatore and 30 per cent silk from Karnataka.

Today's consumer demands variety. Variation in Kota Doria is possible by using new yarn such as bamboo or a combination of natural yarns. Bamboo viscose or regenerated bamboo is a regenerated cellulosic fibre. In the last few years, more and more products from bamboo fibres have been appearing because it has a unique combination of properties. Further variation can be further possible by using new techniques of designing. One such is extra weft figuring. Decorative effects in multicolour are often possible through extra threads in weft direction.

Use of bamboo yarn in combination with silk for designing of Kota Doria by extra weft figuring is presented here.

A design was created on CAD system. Draft and peg plan are:

Border: 15 inch-wide border at the bottom of the fabric was planned. This was prepared by technique of extra weft. Each khat had 14 threads (eight of bamboo and six of silk yarn). Fabrics were made with 325 khats across the width. Fabrics of 48 inch width were prepared. For making khat with 14 yarns, the following colour combinations were used for warp pattern:

Ground: Fabric body was 33 inches wide. Every khat had combination of gray colour (eight yarns of bamboo) and pale turquoise blue colour (six yarns of silk) in warp as well as weft. Body also had six khats per inch. There were total 48 bamboo yarns in one inch. Thus:

There were total 4144 (bamboo and silk) warp yarns in 48 inches width of fabric. 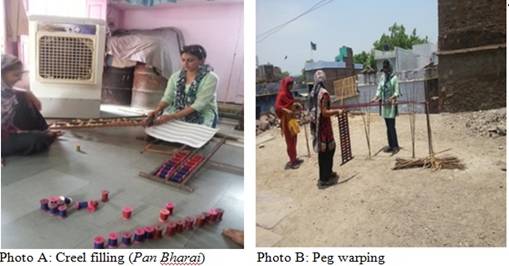 Sizing of dyed bamboo warp yarns was done. Rice and onion juice were applied by brush and stick broom. Sizing by brush has been shown in photo C. 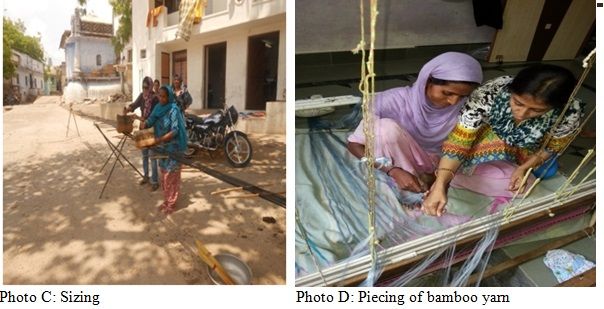 Drafting (Piecing and making the jala)

Piecing: This is the process of joining the new warp yarns with earlier leftover yarns on the loom. Piecing has been shown in photo D.

Making harness (jala): In local language, the harness is known as Jala. After piecing, separate harness or jala was made for extra weft. Extra weft yarns were controlled by harness locally called Gate. Cord was used to join all warp design yarns separately with the Gate for extra weft. This has been shown in diagrams 1 and 2. Weaving included designs created with extra weft patterns in metallic brown and black and pale turquoise blue for khat. Decorative effects are often attained through extra threads in weft direction. For this harness, jala was prepared according to design for extra weft, Gate was operated by hand with the help of dori or cord. Two harnesses were used for plain weave for warp ground yarns operated by treadle making khats with 14 yarns (eight yarns of bamboo and six of silk) in warp and weft direction. Drafting order is four bamboo two silk two bamboo two silk two bamboo and two silk in two harness [Warp pattern : : 2A 2B 4A 2B 2A 2B 14M 105(4C 2B 2C 2B 2C 2B) 231(4A 2B 2A 2B 2A 2B)], denting order is 2, 2, 2, 2, 2, 2, 2 in 100 count reed. Skirt design has been shown in e2 extra weft. Harness (Jala) is made according to design has been shown in photo E, F and G. 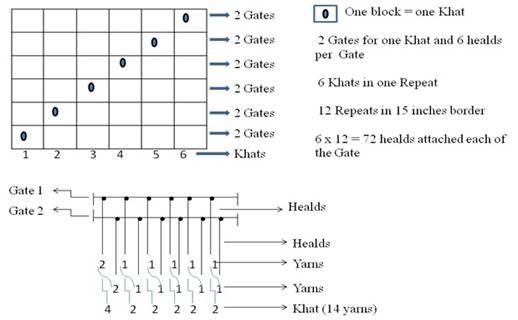 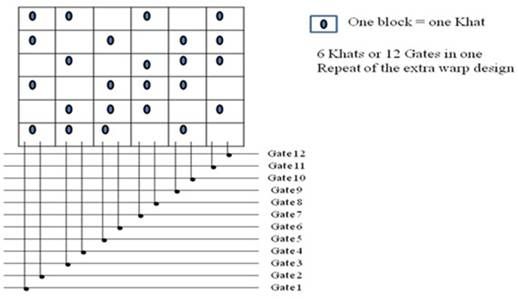 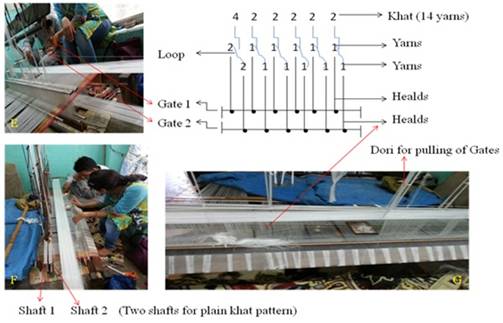 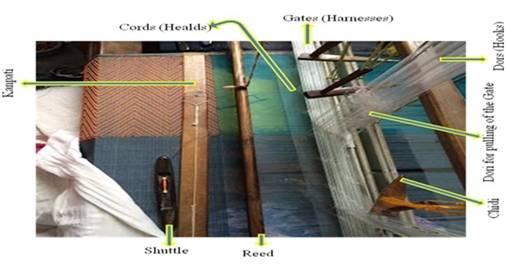 Diagram 3 and 4: Pit handloom and its parts 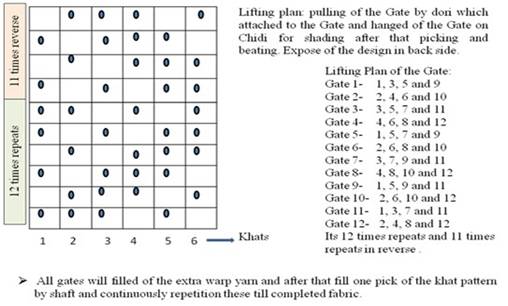 Photo E shows fabric prepared by extra weft technique. It can be said that this technique can be used on pit loom which is being used presently by weavers to make Kota Doria. No special attachment or tool is required to design the fabric. 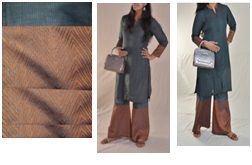 1."Kota Doria-Its is a Traditional style of Rajasthan," Fashion Trend in India garments and Apparel industry Depthai.go.th accessed on July 18, 2010, additional information can be accessed at Kotadoria.com