Rana Plaza: The next steps

The issue of factories in Bangladesh meeting international standards has dominated the discourse since the Rana Plaza disaster of April 2013. A recent paper in a reputed journal looked at the steps taken by international companies since the tragedy, and the structural problems within Bangladesh. The paper points out the improvements that have taken place since 2013, and suggests steps needed to take safety and rights issues to the next level, writes Subir Ghosh. 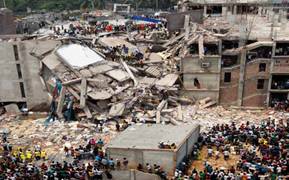 Threats of consumer backlash and criticism from unions and the media have sensitised many Western companies to pay greater attention to how their Bangladesh suppliers operate. But that is only a starting point, as many have been aserting. So, what next?

This subject has been explored by Motoko Aizawa and Salil Tripathi of the Institute of Human Rights and Business (IHRB) in a paper titled 'Beyond Rana Plaza: Next steps for the global garment industry and Bangladeshi manufacturers' in Business and Human Rights Journal, published by the Cambridge University Press in January this year.

The authors point out that Bangladeshi factories operate on high volume and thin margins, and for changes to take place, "Bangladesh will need many more better-trained incorruptible inspectors and independent unions that can negotiate without fear." This, they believe, will take time.

The process has to be continual, but a number of steps towards this can be immediate, and perhaps need to be implemented as well. But for all that, the context itself cannot be ignored. Aizawa and Tripathi write, "Garment exports will remain a critically important sector for Bangladesh for many more years. Any damage to the sector-through sanctions or consumer boycotts-will have catastrophic impact on some of the most vulnerable and poor workers in global supply chains. Bangladeshi union leaders have stressed that they are against boycotts."

The first step the authors point out is the need to develop new financing mechanisms. They talk of William Wilberforce and other campaigners in Victorian England who created a moral climate against the scourge of slavery, and parliamentarians, many of them slave-owners or traders themselves, who voted to outlaw slavery. The authors put their point across, "Rules that require parliamentarians to recuse themselves from voting on legislation where there is a clear conflict of interest are necessary, with proper oversight mechanisms."

Aizawa and Tripathi argue that ultimately it will have to be Bangladesh which will have to take ownership of the (safety and rights) issues. "For initiatives like the Accord and the Alliance to succeed in the long run, local ownership and genuine local participation are needed. These initiatives should not be perceived as paternalistic foreign intrusions and need to engage local industry in a more equitable relationship."

Precious little can be achieved without proper monitoring, especially given the fact that besides the 4,296 factories that are exporters to major markets in the West, there are around 2,500-3,000 factories that produce exclusively for the domestic market. "Government inspectors are unable to monitor all factories. Supervisors sometimes overlook infractions, partly due to bribery. It is critical for the government to increase the number of supervisors, improve their salaries, and ensure that supervisions are consistent and regular."? 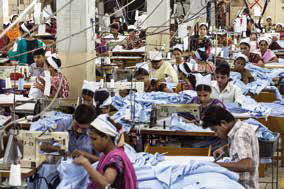 The problem at hand is huge, and there will have to be multiple finding mechanisms to tackle the problem at hand. The question also arises if Bangladesh itself is ready. Aizawa and Tripathi point out, "The capacity of recipients to absorb such funds is a major issue, and it will be necessary to develop mechanisms to ensure sensible distribution of funds to avoid potential inflation or corruption. Stakeholders would have to agree to specific social outcomes (which could include a compensation fund, a trust fund to pay for factory improvements, and so on) that must be achieved and to administer the funds effectively and efficiently."

The London-based Institute for Human Rights and Business (IHRB) is dedicated to being a global centre of excellence and expertise on the relationship between business and internationally proclaimed human rights standards. IHRB undertakes cutting edge research and analysis on key thematic issues at the interface of human rights and private sector activity. The institute works onwards raising corporate standards and strengthening public policy to ensure that the activities of companies do not contribute to human rights abuses, and in fact lead to positive outcomes. Aizawa is the institute's managing director, and Tripathi a senior advisor (global issues).

Senior journalist Salil Tripathi has long-standing experience in advancing the business and human rights agenda. As a researcher at Amnesty International (1999-2005) he participated in negotiations that created the Kimberley Process Certification Scheme and represented Amnesty in the Voluntary Principles for Security and Human Rights process from its inception until 2008. Tripathi is a contributing editor at Mint and Caravan, and was formerly a correspondent for the Far Eastern Economic Review in Singapore. His recent book, The Colonel Who Would Not Repent: The Bangladesh War and its Unquiet Legacy, has been critically acclaimed.

On international unions being sceptical about the progress

ST: Any commitment that is not binding is usually suspect in the eyes of the unions because they do not know how to hold people accountable if they (the latter) make promises and do not deliver. It is not about Gap or Walmart. It is not company-specific. What the unions resent is that it is non-binding, and also in the American system they do not have union representation in the governance of the system itself, whereas the European one does include the unions.

On need for the campaigns to look beyond the 2,000- odd factories

ST: I think the campaigns will be forced to enlarge their scope (sooner or later). The broader question in Bangladesh is that all these things are touching only the top-end of the problem: the industries that are selling to the West. What about the factories that make products only to be sold in Bangladesh? Bangladesh has a leather industry. It has a ship-breaking industry too. There also the worker conditions are terrible.

On these campaigns having a cascading effect on other industries

ST: That is the hope. It should be that way.

ST: I agree. Whenever I address the industry, I say you have to ensure that it is a Bangladesh-owned problem. Bangladesh will have to improve their own standards.

The Bangladesh government will have to regulate it better. You cannot always rely on the goodwill of a company, and the pressure of Western consumers. Take the ship-breaking industry that I mentioned, for instance. There is no consumer involved, since who will be interested in ship-breaking? Except for the one who is selling the scrap, and also wants to get rid of the problem, no one is. So, it is the Bangladesh government which will have to say that we have an obligation to look into this.

On pressure on Bangladesh being immense in the days to come

ST: Agreed, and therefore Bangladesh needs to diversify its economy. You cannot be a single-product economy in the world any more. The oil industry is realising as much with oil at almost $30 to a barrel, and these countries are barely able to sustain themselves. So, Bangladesh too will have to think of other industries in order to grow.

On fast fashion and Bangladesh being a producer of such apparel

ST: People want to buy t-shirts for only five dollars. Consumers in the West also wear some of the blame. They want to buy a t-shirt that they will wear twice and throw it away. Because if it is a five-dollar-tshirt, you are not going to wear it 15 times. Because of that there is pressure on manufacturers to keep squeezing the costs further and further, so that they can sell it very cheap.