There are very few who know that companies like VF, Levi's and Primark are already sourcing from Tanzania. It has a number of industry-oriented policies and structures in place for anyone working in the cotton-textile-apparel chain. The country is one of the more stable ones in Africa, and has a relatively high GDP growth. It is not without reason that Asian investors are eying Tanzania, reports Jozef De Coster from Dar es Salaam.

The East African country of Tanzania has the potential to become the next hot apparel destination, challenging countries like Myanmar and Ethiopia. That is at least the point of view shared by the country's Textile Development Unit (TDU) and a number of pioneering investors and brands. Tanzania's new Five Year Development Plan (2016-2017 to 2021-2022) is clearly supporting the further development of the cotton-textile-supply chain, but not enough. A brave global vision on the sector's future is still lacking as well as the sense of urgency needed to catapult Tanzania into the list of leading apparel exporters.

Few people know that companies like VF, Levi's and Primark are already sourcing from Tanzania. A number of large buyers from the US and EU either have already visited Tanzania or will soon do so. Just like it successfully did for Kenya and Ethiopia, Phillips Van Heusen (PVH) is trying to warm up some of its Asian suppliers for an investment in Tanzania, also a country that benefits from the African Growth and Opportunity Act (AGOA).

Theoretically, Tanzania has probably more comparative advantages for making/exporting garments than any other country in Africa. 'Tanzania, the best overall location for apparel making in Africa', is the slogan of Tim Armstrong, the investment promotion director of Tanzania's Textile Development Unit (TDU). Of course, the devil is in the details.

Foreign textile and clothing manufacturers, like two visitors who were recently scouting Tanzania in preparation of a possible investment from one UK/ Bangladesh firm and one Indian firm, detected a number of issues and bottlenecks in the country's cotton-textile-apparel supply chain. However, they continued thinking that, given developments in China and South East Asia, the best time to mould Tanzania into a successful apparel export country is now.

The bright side of Tanzania

The TDU is a partnership between the Tanzanian government and the charitable organisation Tanzania Gatsby Trust. Investment promotion is one of its priority areas of work. The TDU was quite successful in drawing the attention of some large buyers and manufacturing groups on Tanzania. Recently, representatives from companies like CherryField (Turkey), TAL Group (Hong Kong), Sae-A (South- Korea), A&A Shandong (China), Needlecraft (Jordan), Pentex UK, Shibufei (China), KAPL (India), Echo (UK), Ridham (India), Arvind (India) and Raymond (India) visited Tanzania. Many other companies are expected to come soon with a delegation this March with a major retailer.

The TDU stresses that Tanzania has more to offer than duty-free market access and abundant, English-speaking workforce, like several other African countries do. Tanzania has the largest cotton production, ginning and spinning capacity in the region. Thanks to the hundreds of millions of dollars invested in the textiles industry by the socialist government of Julius Nyerere, the number of textile mills grew from four in 1968 to 35 by the early 1980s, employing 37,000 people. As a consequence, Tanzania still has considerable textiles expertise in the production of yarns and knitted and woven fabrics. Its textiles industry is considered clean and socially compliant. New investors can find available greenfield land with some existing sheds for rapid start-up. Tanzanian cotton, cultivated by more than 400,000 farmers, is rain-fed, handpicked and grown using little pesticides.

And that's not all. At the start of 2016, Tanzanian investment promoters can boast that the attractiveness of the country is enhanced by at least three interesting new elements. Tanzania, which already has three international airports and four ports, is now building some 50 km north of Dar es Salaam, a showcase megazone with integrated port-to be the biggest on the East African Coast (Bagamoyo Portside). Its huge gas reserves recently started to feed the national grid, guaranteeing a reliable power supply. Then, there's the new president John Magufuli, nicknamed "the Bulldozer". It is widely believed that under Magufuli the remarkable social and political stability and constantly high GDP growth (6.7 per cent on average since 2010) of Tanzania are safe. What's more, Magufuli has the ambition and talent to get things done. Tax evasion and corruption are likely to get a blow.

This is, for example, the case of the Tanga Region, north of Dar es Salaam. The Tanga Region is proposing investments in large and small-scale cotton plantations and ginneries. It also proposes textile manufacturing projects in a (National Development Corporation) (NDC) site with 100 plots and in the export processing zone in the Neema Industrial Area. 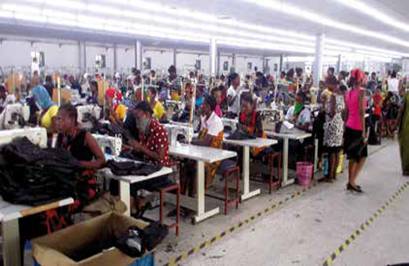 Some issues in the supply chain

So, what could stop the rise of the Tanzanian cotton-textile-apparel sector when this sector is enjoying so many comparative advantages? It appears that not one, but several factors are hindering the smooth running of the supply chain. Such factors can be detected for instance in cotton farming and in maritime logistics.

Efforts by some elements of the ginning industry to introduce contract farming in the Tanzanian cotton sector have initially shown very promising results. Then, some opponents of the system used their financial and political powers to frustrate it. This resulted recently in a drop in Tanzanian cotton production. However, there appears to be a positive conviction within the industry that contract farming offers a mechanism to reverse the decline in national cotton production.

Another problem is the longer lead times for in-bound Asian piece goods. But industry sources say that customs clearing times are improving rapidly thanks to the recent Magufuli shakeup of customs and the new on-line clearing system-Tancis. Furthermore, the Shippers Council of Eastern Africa (SCEA) has recently announced that Dar es Salaam port in Tanzania was the best performer in East Africa in 2015.

It is very unlikely that Tanzania could soon become a billion dollar apparel exporter without an important inflow of FDI. This does not mean, however, that the domestic textiles groups have no growth potential. Especially, Mohammed Enterprises Tanzania MeTL Group and A to Z are eagerly proving they have.

The MeTL Group is Tanzania's largest homegrown company. It has a turnover of more than $1.5 billion, employing more than 25,000 people. CEO Mohammed Dewji expects his group to hit total revenues of $5 billion by 2018. MeTL employs more than 4,000 people in the group's three textile mills in Tanzania (a fourth mill is operating in Mozambique, and MeTL is at present also considering textile investments in Zambia, Malawi, Ethiopia). The largest of the group's textile mills, 21st Century in Morogoro, has just installed a state-of-the-art knitting and garments factory, aiming to produce ultimately 6.6 million pieces of polos and t-shirts annually.

A to Z Textile Mills in Arusha is mainly known for its treated mosquito nets. When in February 2008 US President George Bush paid a state visit to Tanzania, he visited A to Z, at that moment the only net producer in Africa certified by the World Health Organization. A to Z is a 50-50 joint venture between the Japanese multinational Sumitomo Chemical and Arusha A to Z Textile Mills.

Employment in A to Z reached 7,605 by the end of 2014. Further growth can be expected since the company has widened its business to the stitching of underwear, t-shirts and polo shirts.

Also, some other homegrown companies have great expansion plans. Namera Ltd is setting up a new knitting and garment factory. The sportswear producer Mazava Garments Ltd in Morogoro, which in 2014 exported 12 million pieces made from synthetic knitted fabric under AGOA (thus enjoying a 30 per cent tariff preference), is now considering to triple its production.

Tanzania has already some experience with Asian textile investors. The appreciation is mixed. Some investors, like Sumitomo from Japan, Sunflag from Indian origin and Dahong from China did a great job helping to grow and upgrade the country's textile and/or garment industry. A few other Asian investments left a bitter taste. According to the Centre for Research on Multinational Corporations (SOMO), Apparel Tri-Star from Sri Lanka was roaming Africa, setting up shop in one country after another. Tri-Star Tanzania was established in 2003 and closed down in May 2005 without giving any notice to the workers or paying them any benefits. The Chinese investment in the state-owned Tanzania-China Friendship Textile Company Ltd ('Urafiki' in Swahili), which started in 1968, is still operational but in a much diminished form. Employment peaked at 5,000 during the eighties. When at the end of January 2016, the Tanzanian minister for industry visited the mill, employment stood at 850, a large part of the machinery had been sold as scrap, and some machines were not operational due to lack of mechanical experts.

However, new Asian FDI is finding its way into Tanzania. China's JD United Manufacturing Co, which produces garments primarily for the US market for customers like Levi's, sought a new place for production, ultimately choosing Tanzania in 2012. Among other benefits, JDU cites the rich incentives of Dar es Salaam's Export Processing Zone where in 2012 it established a garment factory with 500 workers called Tooku. In 2015, employment increased to 1,300 people. This year, Tooku intends to double employment to 2,600 workers. By 2020, the company wants to employ 5,000 people. The idea is that the bigger scale of the operations will have a positive impact on the scale of orders and hence on profitability. Tooku acts mainly as a cut, make and trim (CMT) producer under AGOA for VF, but has also customers from Europe. Primark is one of them.

The Indian group Ridham Texport is now looking for investments in East or Southern Africa preferably in Tanzania, Mauritius or Mozambique. In Tanzania, Ridham has already selected a location where it could start a fine fabric production plant with yarn dyed checks. The group wants to integrate backward step-by-step. The target markets for exports will be South Africa, EU and the US, as well as China, India and Far East countries. Ridham also wants to cater to local markets. The group has plans to invest $5-6 million initially and then to bringin more funds. It is also planning to establish a Global Organic Textile Standard (GOTS) certified organic cotton business.

If the design-to-delivery apparel supplier Echo Sourcing, which is currently exploring Tanzania, would decide to make the jump and to invest $27-30 million (of which $10 million with own money and the rest borrowed), more than a few things will change in the Tanzanian garment industry. Echo Sourcing has its head office in London, a sourcing office in Dhaka, and three factories in Bangladesh (Echotex Ltd) which together employ some 12,000 people. The company, which lists many major European fashion retailers as clients (H&M, Primark, NewLook, Sainsbury's, Fat Face, Inditex ) is headed by the British-Bangladeshi entrepreneur Quais Shafiq ul Hassan, who loves being at the frontline of corporate social responsibility (CSR). One of the great ambitions of Echo Sourcing is creating a totally transparent integrated business, from organic cotton to fashion. Another one is the launch of the sustainable brand Ninety Percent: 90 per cent of the net profit will be given away, 80 per cent to a cause of the consumers' choice and 10 per cent to the workers who make the garments and people who run the brand.