What is more difficult? An innovation or selling it? Sudha Passi tells the story of Ahimsa Silks that has been producing items from silk that is derived without killing the worms.

It has been 25 years since Kusuma Rajaiah first showed the world that it was possible to obtain silk without killing the worms in the cocoon. His Ahimsa Silks, or non-violent silk fibre, has since evolved into a commercially viable fabric; but business continues to flounder for want of promoters and publicity.

This is a primary callout.

Notwithstanding a patent and a registered trademark for his unique fabric, Rajaiah the entrepreneur is striving hard to make Ahimsa Silks a distinct brand with his modest range of traditional and contemporary products for environmentally-conscious fashion connoisseurs.

From traditional sarees, shawls, scarves and stoles, and dress material for women to shirts, ties, dhoties, angavastras, Ahimsa Silks is being used to make inner garments and clothes for babies too, says Rajaiah, who relies heavily on the Internet to market his products. 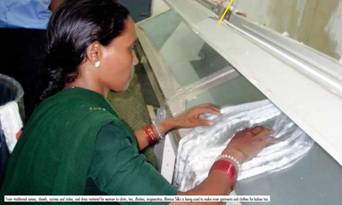 More than 90 per cent of his sales are through his own website and a sizeable number of them are overseas buyers. "Talks are on with bigger e-commerce sites like Amazon," he says.

"Currently it remains a niche product due to its price range," says Rajaiah. The price of Ahimsa Silks fabric is one and half times higher compared to conventional silk fabric of the 80 gram per metre variety. It is less lustrous, softer to touch, and more permeable than conventional mulberry silk, explains Rajaiah, who has 40 years of experience in the handloom industry.

"People are becoming more aware and sensitive about the environmental impact of the products they use." Rajaiah attributes the growing demand for his products to this rising consciousness, citing numerable posts on his website lauding his innovation and expressing their desire to buy them. So, pricing might not be all that prohibitive - at least at the global level.

At present, he can produce up to 5,000 metres of his unique silk fabric per month. He claims an annual production worth ₹4 million. He supervises the production of the Ahimsa Silks fabric and garments at every step to ensure their quality and authenticity. "I give my own design and colour scheme to the weavers," he says with pride as he recalls how he stepped into the business world in 2000 with a modest capital of ₹50,000 from his provident fund and family savings.

The operations are on a micro-scale. Mulberry cocoons are purchased from the market, and then kept in open baskets for around two weeks to enable the moths to develop and break open. The pierced cocoons are checked and separated manually at home-a task performed by Rajaiah and his family, after which they are taken to spinning units. The process of spinning and weaving is outsourced. Information on the website reveals that it takes at least three months between the collection of a pierced silk cocoon and a finished product to hit the market.

From a set-up like Rajaiah's, what are the chances of meeting the demands and fighting IPR infringement issues that he has faced in the past?

"We are meeting the demand," he says, but delves no further. By those yardsticks, the production figures seem impressive. However, one also wonders if production begins after placement of orders, or how much inventory can an entrepreneur like Rajaiah with limited resources afford to stock. One can also not forget that even to reach this level, it has taken a quarter of a century. Financial constraints, he admits, did impede business. For an innovation like this which is named Ahimsa, it comes as a surprise that there is no government role as a promoter or even as a facilitator.

"The government never encourages people like me. I am fed up," he rues, recounting unhappy experiences while doing the rounds of the textiles ministry. There could have been orders, he says. For example, the Andhra Pradesh government under its scheme for promotion of handlooms can commission Ahimsa Silks shawls for presentation to visiting official dignitaries.

Fame and acclaim have come to him as an innovator. The pioneering work has won him accolades from independent organisations in countries like the US and Taiwan. His website displays national accreditations as well. However, the entrepreneur in him would have been happier with help from the state in kind - business promotion like participation in government-sponsored exhibitions within or outside the country and, of course, funding or orders under various schemes. 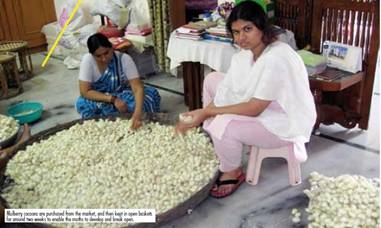 The surge in demand from queries and interest seen on e-tailing sites has encouraged him. How about venture capital? "I am getting overseas buyers. But I did not think of venture capital, it may happen. If any honest person comes forward with capital and marketing, I can expand the Ahimsa Silks business." Rajaiah also relies on the Internet to promote and fight the misinformation campaign against Ahimsa Silks. Many an animal rights activists have questioned the claim of non-violence and Non-cruelty to silkworms in his process.

The moths pierce the cocoon and come out on their own. Then they are kept separately in baskets. Generally, they live for about one week before they meet their natural end and are discarded. "We allow the silk moths to live their fullest life peacefully and die naturally." This process for developing silk yarn (Bombyx mori) in an eco-friendly manner without killing the silkworm encased in the cocoon is patented in his name till 2022.

The aesthetically appealing Ahimsa Silks logo showing a moth flying out of a cocoon is also a registered trademark. There have been instances when wild varieties of silk such as eri and tussar have been promoted as Ahimsa Silks. Few people have the knowledge or the information to differentiate between a registered brand and other varieties. Rajaiah admits he cannot do much except raise awareness about his products through the media. Copies of Rajaiah's patent and trademark registration of Ahimsa Silks on his website is a subtle way to silence detractors as well as draw clients. How many clicks will convert into cash is the million dollar question.