The drought-resilient sisal fibre grows well all year round in hot climate and arid regions which are often unsuitable for other crops. It is resilient to disease and its input requirement is low compared to other crops. It is 100 per cent biodegradable, and absorbs more carbon dioxide than it produces. Sudha Passi writes about the wonder fibre.

Almost 40 years ago, since it was swept out of the commodities market by synthetic polymers such as polypropylene, the sisal fibre is staging a gallant comeback to international trade with increasing demand for industrial use in the automotive, construction, marine, and renewable energy sectors. In times when carbon footprints of petroleum products are choking the planet and the world is shifting towards a greener economy, sisal is proving to be the quintessential resilient material with the additional advantage of being biodegradable.

The prospects for the global sisal industry, which is estimated to earn foreign exchange from nearly half of the 3,00,000 tonnes produced, look very bright as viable sustainable economy models around the fibre have been transforming the lives of a vast multitude of people in developing countries of Africa and Asia.

Sisal is no longer only used to make ropes and agricultural twines. The new commercial applications of this hardy fibre range from composite materials in the automobile industryto strengthening recycled paper; from the "ethnic feel" carpets, rugs and wall hangings to geotextiles and building materials fibre reinforcements. The emerging uses of sisal are shown in Figure 1. 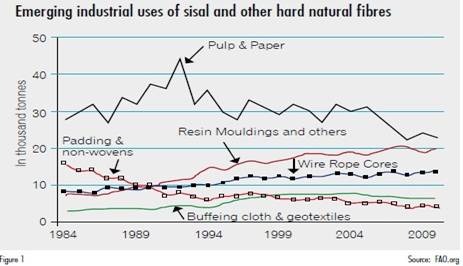 Sisal is being coupled with polyurethane to form a material that is now being used in linings and structural components for automotive interiors such as door panels and trunk liners. Termed as resin mouldings, the innovation has caught the fancy of the automotive industries across the world, according to a trade information brief prepared by AusAid for the South African Development Community (SADC). 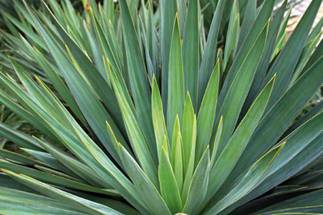 Their conservative estimates indicate that about 6,000 TPA plant fibre-based composite parts can find their way into passenger cars and multi-utility vehicles. Its use as buffing cloth in the auto industry has become very popular as it is strong enough to polish steel and soft enough as not to scratch it. An example of growth in this market is the use of sisal in the production of Mercedes Benz C-class, with one such facility in South Africa. This has helped the Daimler Chrysler group achieve better sustainability rating as well as in the employment ratings of the local South African government when sourcing sisal from other producers.

Similarly, sisal-reinforced composite materials are making their way into water vessels and other transport equipment. Boats can be made by replacing the conventional polymer composite fibres with sisal as reinforcement. In addition, some composites have been used when reinforcing plastic polymers in such things as plastic water tanks, portable toilets, various casings and storage containers, the SADC trade information brief states.

Due to superior mechanical properties and anti-moisture qualities, sisal fibres are being used to reinforce composite building materials as fibre-glass, rubber and even cement. These are a good substitute for wood products, panels, doors, corrugated roofing sheets and instant houses in disaster (floods/ tsunami/earthquake) prone areas. It can attract prospective entrepreneurs and stakeholders due to its durability and cost effectiveness, the Indian researchers say in their paper in the IOSR journal of Mechanical and Civil Engineering India. They have also proposed a sisal economy model (SEM) to encourage sisal cultivation in the country.

The Indian Railways are also a potential application area wherein it is estimated that about 350 TPA fibre composites are required to manufacture doors, luggage racks, panels, partitions, seating, etc. Packaging materials for ags, boxes, crates, containers, which is now made up of wood, can be replaced by cost-effective sisal reinforced composites.

Sisal-reinforced cement corrugated roofing sheets, which are eco-friendly, are being projected as an effective alternative to asbestos fibres that are known to be carcinogenic. Another major use of sisal is in the manufacture of geotextiles. Sisal and other natural hard fibres such as jute are widely used in geotextiles to prevent soil erosion and establishing vegetation over a bank or a slope. Apart from it, these fibres are also used to substitute synthetic fibres such as polypropylene, polyester and PVC as they have the same properties with the additional advantage of bio-degradability. These could include separators, containers, reinforcement, filters (for drainage purposes), silt fencing, mulching, tension membranes and other forms of lining road sub-base, and road asphalt overlays. In these, sisal stands a better chance than other natural fibres, when it comes to durability.

Contrary to popular perception that synthetic polymers are low cost, and so geotextiles using them as components would be cheaper, an FAO-sponsored study points out that geotextiles using sisal or other natural fibres could be 2-5 times cheaper than their competing synthetic polymers. With the global geotextile market showing a CAGR of 10.59 per cent, the scope for end-use of sisal fibre cannot be doubted. In India alone, the market potential of geotextiles for roads, paved road networks and railway applications is estimated to be 2,72,500 tonnes, of which a considerable portion can be earmarked for sisal-based textiles.

Due to its very high strength-to-tear ratio, sisal has also found its way into the paper industry, where the fibres are used to strengthen pulp from non-wood sources, softwoods and hardwoods as well as recycled paper. This because its biomass contains a high proportion of cellulose in its pulp that is also found in wood fibres and adds bulk to paper and cardboard. Given its porosity that makes it absorbent, and high-fold endurance characteristics, sisal makes a high quality input for paper products such as cigarette paper filters and tea bags.

Of late, sisal fibres are being used to make especially hard-wearing carpets and rugs that can withstand heavy use. These are preferred in the European markets for their 'traditional' appeal.

Additional applications include the use of sisal in making particle boards, insulation boards, human food and animal feed, cosmetics and medicine.

It is noteworthy that by-products from sisal extraction can be used for making biogas. To make fuel, the residual biomass is fed into a digester along with cow dung. A sisal waste fed biogas power plant has been established at Hale by Katani Ltd in Tanzania with the help of the UN Common Fund for Commodities. The bacteria in the dung feed on the crop residues, amounting to 15 million tonnes annually to produce biogas which is used to generate electricity, used as fuel for transport, cooking and lighting, or for powering farm machinery.

Liquid effluent from the process is high in nitrogen, potassium and calcium and is sold as fertiliser for the next generation of sisal crops. The effluent is also used as a nutritious animal feed. Subsequent evaluation of the pilot project power plant indicates that 75 per cent of the energy produced could be distributed to rural homes and 25 per cent used in sisal processing.

Significantly, the value of global sisal imports has risen steadily in recent years, more so of processed sisal called sisal tow and waste which grew nine-fold from barely 2,000 tonnes in 1990 to almost 18,000 tonnes in 2005 even as imports of raw sisal stood steady over 50,000 tonnes for the same period. Current FAO estimates put the volume of processed sisal imports at 20,000 tonnes that would command almost $38 million at current fibre prices ranging between $1,700 and $1,900 per tonne.

India with its negligible sisal production does not even feature on the list as an international player. Nevertheless, technologists argue that there is a strong case for promoting sisal given its economic potential and ability to generate large scale employment. Suitability to the Indian climate, with little need of water and maintenance, makes sisal a fit candidate for fast forwarding sustainable development in the country.

Sisal is a perennial hardy plant, which unlike other fibres, is not a seasonal crop. It can establish and easily grow in all states of India covering sub-humid to arid and semi-arid regions. It can also survive in almost all soil types and its input costs are the least for its survival, regeneration and maintenance on a sustainable basis. Sisal tolerates prolonged droughts and high temperatures also. One of the most viable cultivations in such a dry ecosystem is sisal.

At present, however, sisal is not cultivated commercially and the sector is unorganised. It is found on embankments, bunds and roadsides, serving the purpose of soil conservation and protection as edge plantation. Sisal is localised mostly in rural and tribal areas.

According to the proposed sisal economy model of the researchers, sisal plantation activity alone has an annual employment potential of about 113 man-days per hectare. For instance, the state of Madhya Pradesh has 14.17 lakh hectares barren and uncultivated wastelands, out of which 3.00 lakh ha (20 per cent) can be targeted for sisal plantations, which can generate enormous employment potential (339 million man-days) exclusively for cultivation and fibre extraction.

The tremendous potential of sisal as a resource has not so far been fully exploited in India for value addition, and as a source of employment generation in rural and semi-urban sectors. With encouraging growth figures and sound research on its side, sisal makes a strong case for adoption in India in times when it is facing the heat on reducing its carbon emissions.

Attributing its economic decline in the 1970s to over-reliance on only one or two products, the UN Common Fund for Commodities has described sisal as a fibre of the future that needs to be given a chance for a comeback on the global stage.