Pineapple fibre: fruit of the loom

The world is moving towards sustainable material for a better future. That is what makes pineapple fibre important, says Vanali Ballikar. 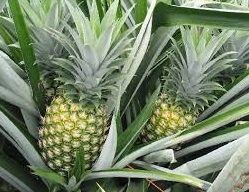 The world is moving towards sustainable material for a better life for future generations. The textile industry's main concern is to give mankind superior, sustainable products that are close to nature. Pineapple fibre is one such natural source of minor fibre. It has seen rising demand in the eco market. A detailed study on the source, cultivation, extraction and processing of pineapple fibres reveals that these fibres can be used as an alternative to leather. This edible fruit that has medicinal values now finds another avatar in textile applications. The fibres can be extracted from the leaf as well as the fruit. The study also gives properties and applications of pineapple fibres towards more sustainable living.

Textile fibres are obtained from the hair, leaf, bast and fruit of a plant. All vegetable fibres are cellulose-based. Pina fibre is from the leaves of the pineapple plant. Pineapple fibres are sustainable natural materials and demand for pina is increasing in the go-green market as technology progresses in using pina as an alternative to existing textiles and leather.

The pineapple belongs to the family of Bromeliaceae (or multiple fruit bearing) plant. The Ananas Comosus, an edible fruit-bearing plant, is a tropical, herbaceous; perennial that grows in countries near the equator. India, like the Philippines and Thailand, has the right climate for pineapples.

Bromelin, a proteolytic enzyme in the stem of the pineapple, has various health benefits. It is used to cure lung cancer, allergies, asthma, in anti-ageing treatments and for faster recovery from surgery. Vitamins like A and B are found abundantly in pineapple, along with Vitamin C, calcium, potassium and iron. Pineapple contains carbohydrates and water, majorly insoluble fibres not harmful for blood sugar.

Pineapple grows abundantly in regions that receive high rainfall like West Bengal, Assam and the north-eastern states, the Western Ghats and coastal areas like Goa, Kerala and Karnataka. Pineapple cultivation in India is majorly seen in the hilly regions of Nagaon and Cachar districts of Assam, Senapati, Thoubal, Churachandpur, Bishnupur, east Imphal regions of Manipur, west and north Tripura, Dhalai Tripura. In the south, you would find fields of pineapple in Shimoga, Udupi and Uttar Canara regions of Karnataka. In Goa, pineapples are cultivated on the hills of Ponda and in Pernem, Bicholim talukas.

Not one, but four

There are at least four main varieties of pineapple around the world.

1. Smooth Cayenne: The main variety in Thailand, the Philippines and Indonesia, it is known for succulent, juicy and sweet flesh. It is eaten around the world mostly as fresh cut fruit or canned.

3. White Perola: Originally from Brazil, it is unusually sweet with a strong fragrance and has pearly white pulp.

4. Giant Kew: Found in India, it is similar to the Kew variety and is grown mainly in West Bengal. Tripura, Meghalaya and Assam grow the Queen variety. Kerala and Goa coastal regions are found with the Rothchild pineapple.

The Kew variety is important for its edible and nutritional components and is grown mainly for canning. The weight of its large fruit varies from 1.5 kg to 3 kg. It is highly juicy with Total Suspended Solids content 8o to 12o brix. The colour of the juice is light yellow and has considerable aroma and flavour. This makes it suitable for canning. 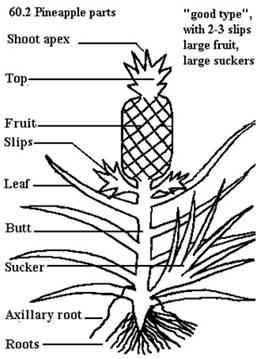 As the fibre is indigenous to the tropics, the crop requires areas where the climate is warm, humid and free from extreme temperatures (25o C is optimal). The pineapple plant grows in loose or porous, well-drained soil that does not retain water. So, clay and marshy soils are not right for pineapple plantations whereas the plant enjoys sandy, loamy soil and laterite land tables. The optimum soil pH range for pineapple cultivation is between 5.5 and 6.0.

Planting time for pineapple is between July and December. The yield depends on the planting material used. Pineapples are propagated from slips or suckers. The crown is also used for cultivation, though it takes longer to grow. Growing pineapple from seed is avoided for the same reason. Suckers are found between leaves of fully grown pineapple plants. Slips are found at the base of some varieties of pineapple fruit. Propagates should be cut from the mother plant and set aside for a week or two to cure. If crowns are planted, any adhering flesh should be cut away. The plants then yields fruit after 22-24 months, though some may take longer.

Slips and suckers weighing around 350 and 450 gm respectively are found best for yielding good quality Kew pineapples. Mass multiplication of propagation material is vital to bring fresh area under cultivation. This is possible only when number of plantlets can be obtained from a single mother plant, unlike few suckers or slips. It has been found possible to use leaf cutting from the crowns of Kew pineapples for multiplication of planting material.

Planting needs care. Once soil is prepared, suckers or slips are planted. Enough space should be given to each plant to encourage it to grow. However, the type of plantation varies according to region and depending on the topography of the land and on rainfall. 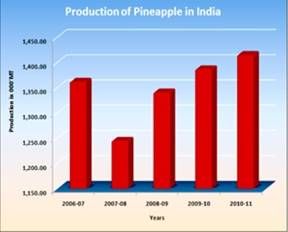 After harvesting, most growers use the leaves for production of fibre. India, however, is lagging in this regard. As per Agriculture and Processed Food Products Export Development Authority of India, there is a sizeable increase in area of land under pineapple cultivation, and pineapple production in recent years. There has been an increase from 87 thousand hectare in 2006-07 to 89 thousand hectare in 2010-11. Production has increased from 1,362 thousand tons in 2006-07 to 1,415 thousand tons in 2010-11.

The fruit enjoys a sizeable market locally and a major chunk is exported to the Gulf market.

Pineapple leaves are long and have a wax coating on the surface. The leaves are washed and cleaned and put through the decortication process. This is done manually or on the decorticator machine. Decortication is the removal of the outer layer of the leaf, or scraping. The exposed fibrous matter is gummy and goes through the next step of retting or immersion of the scraped matter in water. To this water, 0.5 per cent of urea is added for fast retting reaction. Extracted fibres are then hung out to dry. Then, they are spent for spinning.

The major source of the silky pineapple fibres are the long leaves of the pineapple plant. The staple fibre length varies from 0.5-1 metre. Plants producing the best fibres can never yield the best fruits, and vice versa.

Pineapples are rich in lignin and cellulose. Only 52 per cent of the fruit is used for edible purposes and for making jams, while the remainder is dumped as organic waste. The discarded part of the fruit contains rich cellulose and lignin that are generally wasted. The fibre can however be extracted from the discarded portion of the fruit and can be used for making fabrics. Fibres extracted from the waste of pineapple fruits are blended with polyester or silk to make organic fabrics with a silky texture.

India, like the Philippines, has a lot of potential for production of pina fibre. A major use of pina fabric is the creation of the Barong Tagalog, a thin and transparent embroidered garment worn over a shirt and other formal wear in the Philippines.

Pineapple fibre is used to make sustainable and more environmental-friendly products. Using biotechnological methods, pineapple waste can produce silky, white fibres. They can be added with other allied fibres for zero waste management, to create improved quality products and to increase employment opportunities in the rural population.

Pineapple leaf fibres are long and are blended with other fibres in place of jute and other bast fibres. They are used to make heavier fabrics for upholstery and furnishings. The fibres are used in industrial applications like tires and conveyor belts. The sturdy and lustrous fibre finds wide applications from apparel to technical textiles. They are among the latest entrants in the paper manufacturing industry. With its various vitamins and compounds, it finds use in the pharmaceutical and cosmetic industries.

Ripe for the fruit

The climate of India is suitable to grow pineapple. Research in agriculture has boosted its production. However, most of the plantation is for its high cash fruits. Efforts are yet to go into fibre production. India needs to increase the production of such sustainable fibres.

Vanali Ballikar is a lecturer in Government Polytechnic of Panaji, Goa.