Asian suppliers of fabrics, accessories and machinery as well as Western clothing brands continue considering Cambodia as a zealous cut-make-trim (CMT) garment manufacturer that is advantaged by low labour costs and preferential access to developed markets. It looks, however, increasingly uncertain how Cambodian garment exports will develop in the coming years. Will these exports continue their triumphant rise? Or will they stall and commence to decline in favour of countries like Vietnam and Myanmar? Jozef De Coster reports from Phnom Penh.

The main components of the Cambodian garment industry's SWOT profile (its main strengths, weaknesses, opportunities and threats) are well known. Cambodia has relatively low labour costs and enjoys preferential access to the world's richest markets. On the other hand, it has no free on board (FOB) capabilities, and its competitiveness is weak. It's threatened by political and social unrest, and the growing competitiveness of Vietnam and Myanmar. But there are surely some opportunities in exploring new suppliers (e.g. in India) and new export markets. Here are some positive and negative factors that would be-investors, suppliers and buyers should take into consideration.

Cambodian factories are able to produce high-value garments: Though the rotation of garment factories in Cambodia is quite high (many closures, many new entrants), there's a strong core of companies that now has twenty or more years of solid manufacturing experience. That Cambodia has low minimum wages does not imply it's solely a producer of low-value garments; many European brands get high-value items produced in Cambodia. A British company is now producing trousers and suits for Marks & Spencer, and according to Mona Tep of French organisation Evalliance, some companies even have the skills of making complicated jackets needing 150 different operations.

Government and foreign machinery suppliers encouraging local input production: Though Ken Loo, secretary-general of the Garment Manufacturers' Association in Cambodia (GMAC) believes that FOB-production in Cambodia is "a closed window", the royal government continues encouraging investors to develop an upstream textiles and accessories industry to help Cambodia compete with countries with more integrated garment production bases. The government's garment target for 2016-2018 is that by 2018 less than 50 per cent of garment factories would operate on a CMT-base (which is clearly an illusion). At the last Cambodia International Textile & Garment Industry Exhibition in Phnom Penh, some foreign machinery suppliers, like the Italian world leader of button making machines Bonetti Srl, declared that they expect Cambodia to produce more inputs locally in the future.

Lack of needed skills properly assessed: As can be expected in a country that is highly dependent on foreign aid and where international institutions and NGOs abound, there's no lack of studies on Cambodia's need of skills. Eric Mousset of Confluences Consulting in Phnom Penh recently submitted to the ministry of education a report titled 'Analysis of Skills Demand Related to Cambodian Higher Education Graduates: Policy Recommendations for the Adjustment of Skills Supply'. It was a World Bank Project. Besides, two recent useful studies have been financed by the Asian Development Bank (ADB): 'Kingdom of Cambodia. Strengthening Technical and Vocational Education and Training Project II (TASF)' and 'Cambodia: Addressing the Skills Gap'. A March 2016 study by Jean-Francois Limantour and Roger Zacaropoulos of Evalliance, titled 'Cambodia: A Promising Strategy for Future', had specifically focused on the skill needs of the Cambodian textiles and garment industry. All these would turn out to be useful for the new Garment Training Institute which the GMAC is currently building in Phnom Penh's Special Economic Zone.

Panalpina poised to make freight forwarding charges more competitive: Switzerland-based Panalpina Group, a leading provider of forwarding and logistics services and a specialist in supply chain management solutions, officially opened its own office in Cambodia in August 2016. Panalpina operates a network of 500 branches in more than 80 countries. CEO Sven Raudszus of Panalpina World Transport (Cambodia) Co Ltd says that the manufacturing sector in Cambodia is expanding rapidly and there's an increasing demand for logistics services across the Cambodia-Thailand and Cambodia-Vietnam borders, with the kingdom as a production base. With Panalpina now physically in Cambodia, freight forwarding charges will become more competitive. Until now, transport costs remained high compared to Vietnam and Thailand.

According to a report from the Japan International Cooperation Agency (JICA), freight forwarding costs in Cambodia are about $540 per twenty-foot equivalent unit (TEU) compared to $200 per TEU in Thailand and $250 per TEU in Vietnam. Mey Kalyan, senior advisor to the Supreme National Economic Council, says that freight forwarding costs in Cambodia were exorbitant. Therefore, something needed to be done "to prevent freight forwarders from killing Cambodia's manufacturing sector."

JICA preparing mass transit system for Phnom Penh: Phnom Penh, where most garment factories are located, is a fast expanding city (unofficial estimates put the number of inhabitants at 3 million) that is increasingly suffering from daily heavy traffic jams. The Japan International Cooperation Agency (JICA) is now helping Cambodia conduct a feasibility study on an automated mass transit system. Investments in such a system would considerably improve mobility in the country's capital.

Manufacturers find workers outside Phnom Penh: The strong growth of the garment manufacturing industry in the Phnom Penh area makes it increasingly difficult for factories located in the capital to find good workers. Some other regions are now touting their advantages. Takeo province, in the south of Cambodia, adjacent to Vietnam, presents itself as an ideal location for garment manufacturing because of its inexpensive and well-trained labour force, sound infrastructure and proximity to neighbouring ASEAN country Vietnam. Takeo has been a major source of labour for Cambodia's fast growing garment industry. In fact, many skilled garment workers in the Phnom Penh area are from Takeo. Several garment factories have already moved to Takeo to be closer to the source of labour. Takeo is only 1.5 hours drive from Phnom Penh and 2.5 hours from the deep-sea port at Sihanoukville. Also, Koh Kong, in the south of the country and close to Thailand, boasts being an attractive investment location for garment manufacturing.

Fast climbing wages threaten Cambodia's competitiveness: Stephen Higgings, managing partner of investment firm Mekong Strategic Partners, recently said that the rapid rise in Cambodian wages is threatening the country's progress into middle-income status. He said the kingdom's reliance on the garment sector was fine for trade, but Cambodia should aspire to diversify its manufacturing industry too. In 2015, combined garment and footwear exports accounted for 78 per cent of the country's total merchandise exports. Glenn Maguire has been warning that Cambodian productivity is not keeping pace with climbing wages. A report from the International Monetary Fund (IMF) had pointed out that rapid credit growth and increased concentration of investment in the real estate sector too are threatening Cambodia's economic health.

Dropping garment exports to US: The US, where Cambodia is competing against China and other strong garment exporting countries, has for a long time been Cambodia's main export market. However, for the last five years or so, Cambodian garment exports to the US have been dropping. In the six months from January to June 2016, they fell as much as 14.2 per cent. 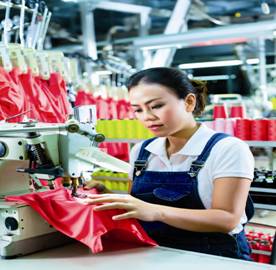 Weak investment climate: Most exhibitors at the 6th edition of the Cambodia International Textile & Garment Industry Exhibition in August 2016 had expected good business at the fair. On the one hand, Cambodian garment exports to some major markets have been doing well. But on the other, the royal government has been pushing garment manufacturers to invest in higher productivity and more FOB-production. It was, thus, an unpleasant surprise for exhibitors that a cold business climate reigned at the show. It was, however, not a surprise for the Cambodians themselves, who expect turmoil due to commune and national elections in 2016 and 2018 respectively. Also, the diverging views of employers and trade unions on two thorny issues (the imposition of the new Trade Law of May 2016 and the increase of the minimum wage from January 1, 2017) are expected to accelerate clashes.

CMT garment exports: Today, the Cambodian garment industry is essentially a CMT industry. With the exception of a modern knitted fabrics factory, there is probably no textile company in Cambodia that can produce high-quality fabrics suited for garments in Western markets. 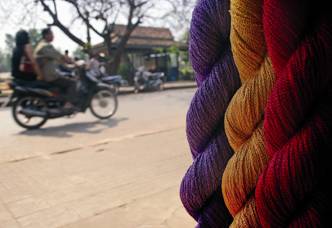 Most garment factories have limited autonomy: Strictly speaking, there's no 'Cambodian garment industry'. There is a 'garment industry in Cambodia', which was initiated and is still mainly driven by Chinese and other Far East investments. One should not approach a Chinese factory in Phnom Penh like a Chinese factory in Mainland China. Mostly, the factory managements in Cambodia have a limited degree of autonomy since they are controlled by a Chinese (or other) garment multinational.

Local cotton production project put on hold: Manhattan Textile & Garment Corporation had initiated efforts to create a cotton growing sector in Cambodia in 2000, and had encouraged Cambodian farmers to engage in cotton cultivation. The enthusiasm of farmers was temporarily boosted by very high international cotton prices. However, when prices dropped to a more stable level, most farmers shifted to other cash crops like tobacco or cassava. Larry Kao, general manager of Manhattan Textile & Garment, says that his company decided to put the cotton project on a hold. According to Kao, Cambodia needs a cotton foundation which can guarantee farmers a good price, and lobby for public investments in irrigation systems. Some other companies than Manhattan still continue experimenting with cotton cultivation in Cambodia (also of organic cotton) on a small scale.

Phnom Penh, one of the world's least liveable cities: In spite of the shift of a number of garment factories to the borders with Vietnam and Thailand, Phnom Penh is still the centre of the Cambodian garment manufacturing industry. According to the Annual Global Livability Ranking, released in August 2016 by the Economist Intelligence Unit (EIU), the Cambodian capital scores poorly. It is ranked 127th out of 140 capital cities and commercial hubs (126th position in 2015). Major complaints are widespread corruption, poor health care, and lack of adequate infrastructure.

Not much Indian interest for Cambodian market: At the Cambodia International Textile & Garment Industry Exhibition in August, only one Indian media company from Mumbai had a booth. A few years ago, in 2013, there was more Indian interest. Two important Indian denim producers participated wanting to test the Cambodian market: LNJ Denim, a unit of the LNJ Bhilwara Group, and denim manufacturer Nandan Exim Limited from Ahmedabad. The last available statistics show that in 2011 Cambodia imported $1,036.9 million yarns and fabrics from China, but only $11.8 million yarns and fabrics from India ($9.7 million woven fabrics, $1.8 million knitted fabrics and $0.5 million yarns).