The Consortium of Green Fashion 2016 was held in Vadodara over September 30-October 1, 2016. This year's theme was 'Empowering Khadi and Handlooms through Design Intervention', and a number of sessions and contests dealt with the interplay between khadi/handlooms and sustainable fashion. Meher Castelino reports.

Seminars and conferences on sustainable fashion, khadi and handlooms have been taking place not only in India, but around the world for several years now. There are constant debates in India on how khadi, handlooms or banarasi brocades can be improved and promoted so that the life of the weavers improve and they are not compelled to take up other professions. Designers too have been constantly urged to use more handlooms. While a few designers have made it their mission to promote only khadi and handlooms, the movement is still in a nascent stage.

But in spite of all the discussions, why are khadi and handlooms still visible only on Gandhi's birthday and not throughout the year? What is missing in the efforts to provide an impetus to this movement? Is there too much talk and too little action? Has textiles minister Smriti Irani's initiative to encourage people to post their photos in a handloom khadi sari helped the industry? There are several things that seriously need to be considered to bring handlooms/khadi on to the centrestage. 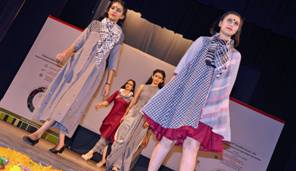 The fourth edition of the Consortium of Green Fashion 2016 (CGF), held in Vadodara from September 30 to October 1, 2016, was an enlightening experience in sustainable fashion. The theme 'Empowering Khadi and Handlooms Through Design Intervention' was an initiative of the School of Fashion Technology (SOFT), Maharishi Karve Stree Shikshan Samstha of Pune in association with the department of clothing and textiles, faculty of Family and Community Science (F&CS) of the Maharaja Sayajirao University (MSU) of Vadodara. Nearly 600 fashion students from different institutes in India participated in the two-day event.

The inauguration was dominated by distinguished personalities. Uma Iyer, dean of the faculty of F&CS at MSU emphasised on the need to bring farmers into the weaving and spinning industry and push for khadi. Manju Hundekar, secretary CGF and principal SOFT, outlined the need for green fashion. Anjali Karolia, head of the department of clothing and textiles at MSU felt that handloom was competing with powerloom. Parimal Vyas, MSU vice-chancellor, hoped that while khadi meant freedom, non-violence and self-dignity, it had to be taken to the next level not only nationally but globally and make promotions a collective initiative.

Promod Gorhe, chairman and ND Patil, vice-chairman of MKSS, Pune felt going green starts with a shift in consciousness. Mohana Kadam, CGF president, felt the need to reduce, recycle and reuse. Edric Ong, chief guest and Malaysia's top designer who started World Eco-Fibre and Textile (WEFT) declared that rebranding was good for business but rethinking was needed more. He added that green meant sustainability and going back to simple life.

The highlights of day one were the keynote addresses by designer Ritu Kumar and Edric Ong.

Ritu Kumar, who inaugurated the handloom and crafts exhibition, has worked for years with weavers from all over India and is an authority on textiles. She revealed how she realised the need to learn more about India and its crafts when she went to the United States as a student. She urged students to study textiles and crafts as the country was on the verge of losing them. "We have technical knowledge in our DNA, which will help (resurrect the crafts and handlooms). Have confidence in our textiles. We don't need endorsements from the West, and do not be in a hurry to appear on the ramp as it's the last (step) in fashion education." 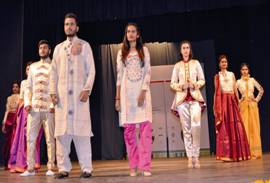 Edric Ong said working towards an eco-lifestyle conjured up a vision of a world where people live harmoniously and healthily in an environment that respects the earth and nature. Mankind is the constant consumer. "However, in this modern age, aggressive marketing and consumerism seems to be our biggest obstacle to cross, in order to establish that idealistic eco-lifestyle." He also questioned how much is enough and is 'slow fashion' the answer? Here, he gave the examples of successful 'slow fashion' concepts that have been traditional in several cultures e.g. the sari as heirloom in India, Japan's boro textiles that are recycled.

"There are contradictions in our personal views about fashion; on old vs new, the fast vs slow factors, local vs international styles, green fashion vs techno fashion. But, fashion is about trends, and trends are about seasons and change. 'Slow fashion' is not a new concept; it had always been there, but was not highlighted. It was taken for granted and relegated to being old fashion. We now need to provoke and promote better and more consciousness among the public. Think about the future generations. We need to constrain ourselves before we succumb to the fate of destroying the world we call home. Our fragile world needs mending," he concluded.

There were parallel sessions later that included presentations on subjects like 'Design intervention for different markets', 'Technology upgradation for khadi and handloom industries' and 'Promotion and branding of khadi and handloom products'. Students competed in contests about 'Creative surfaces in khadi and handlooms', 'Quality enhancement in khadi and handloom' and finally 'Innovations in design in khadi and handloom'. Workshops were conducted by Philippe Werhahn from Germany who worked around upcycling, while Beaded Edge by Artisans of Dharohar, Gujarat and Batik on Khadi by Seneca D'Silva from Sri Lanka kept the participants engrossed.

The second day was a series of panel discussions with experts sharing their views and impressions. The first topic 'Initiatives in socio-economic sustainability by government and non-governmental agencies' was covered by Bijan Paul, consultant and former development commissioner for handlooms at the ministry of textiles.

Paul argued that mankind did not care for earth, but was looking for other planets. Judy Frater, founder director of Soumaiya Kala Vidya, felt the re-visioning of handloom in an industrial world was much-needed. Kutch, where Frater works, is home to handloom, but many weavers there had switched over to making polyester uniforms. Her programme for business and management for artisans is now helping them improve their skills.

Benjamin Itter, co-founder and CEO of Lebenskleidung, felt there was a need for tradition to meet modernity and talked about how green fashion can help in presenting India's heritage. "Khadi is a way of life, not only cloth. Rethinking khadi is the true approach. Sustainable living is through sustainable clothing. But, clothing is the most polluting industry. India is the second largest producer of cotton in the world. Today, fast fashion has brought in 52 micro-seasons. So a balance is needed in social, economic and environment. We need khadi 3.0," declared Itter.

The second session was on 'Design and branding of khadi and handlooms - Success stories', where Albert Rigo, head of quality control at Fabindia, spoke about the branding of handlooms and artisan products, and how the brand had built a connection between product and customer with a film. Bina Rao of the Creative Bee Foundation spoke on 'Tradition to trend for khadi and handlooms', which are interconnected. "Khadi is our heritage, and khadi can be decoded and reinvented."

Shailini Sheth Amin, founder and CEO of Sah Unnati Foundation and founder of Moral Fibre Fabrics, felt there were 50 shades of green and there was a need to free the environment from polluting and depletion. Designer James Ferreira ended the session with advice on how to design with khadi, and how fashion itself had changed in khadi.

The final session, moderated by Hemang Agrawal of the Surekha Group, Varanasi and Rahul Bhajekar, director for standards development and quality assurance at the Global Organic Textile Standard (GOTS), had a varied and lively panel comprising Benjamin Itter, Bijan Paul, Himadri Ghosh, Durgesh Jadeja, as well as weavers who shared their thoughts on khadi and handlooms.

Twelve exciting collections were presented by six fashion institutes at the event. The garments had to be made in khadi/handlooms, and the students proved their skills by presenting some very innovative designs. 'Warp Meets Weft', created by IFT from MSU, won the contest. The layered grey/maroon midis, saris, blouses, maxis, pencil skirt, patch work kurta in checks and solids were ideal for the coming season. The second and third prizes were cornered by the Sophia Polytechnic Mumbai. 'Ahimsa', the first runner-up featured a collection of beige cowl pants in amazing patterns teamed with white stylish blouses. Each combo was a study in innovative construction and creativity.

Some of the other collections that made an impact were 'Elements of Nature' featuring the five elements of nature like Brahma, Vayu, Jal, Agni and Bhumi in elaborate creations as well as ready-to-wear versions featuring will-power gowns, printed maxis, skirts, shirts, jackets, kurtas and creations with impressive cord work. 'Rogan Art' was a collection, which showcased unusual craft for His and Her creations that displayed clothes for children, teens, grownups and mature dressers.

The show also included a finale collection by Edric Ong, who displayed some fabulous unisex garments with indigo leaf design in leafy colours along with shibori on fabrics, which were woven in India with natural dyes. The sarongs, shirts, skirts, jackets with a marked kimono style silhouette were teamed with trendy hats and gorgeous jewellery all designed by Ong. The high waist pants and fluid jackets in earthy colours created a calming relaxed effect on the ramp.

One of the highlights of the event was the fashion quiz created and conducted by this writer along with Benjamin Itter. Five pairs of students answered questions on past and present Indian and international fashion as well as khadi, handlooms and green fashion. Winning the quiz were students from School of Fashion Technology, Pune with Sophia Polytechnic, Mumbai coming a close second.