Short-term indicators play an important role in economic analysis by providing a comparison of economic performance over time, which is a fundamental requirement for policymaking. The Index of Industrial Production (IIP) is one of the most important short-term indicators; it measures volume changes in the production of an economy, and subsequently gives an estimation that is free from influences of price changes. This indicator is of foremost significance to the government for policy-planning purposes and is also being extensively utilised by different organisations including, research institutes, academicians, and industrial associations.

The IIP details the development of different sectors in an economy. The general scope of the IIP, as suggested by the United Nations Statistics Division (UNSD), incorporates mining and quarrying, manufacturing, electricity, gas steam and air-conditioning supply, as well as water supply, sewerage, waste management and remediation activities. But due to constraints like data availability and other resources, the present general IIP compiled in India has in its scope the mining, manufacturing, and electricity sectors only. The bifurcation of mining, manufacturing, and electricity production in overall IIP are 14.16 per cent, 75.52 per cent and 10.32 per cent, respectively.

The all-India IIP is a composite indicator measuring short-term changes witnessed in the volume of production of a set of industrial products in a given period with respect to a pre-defined base period. The Central Statistics Office (CSO) (under the ministry of statistics and programme implementation) compiles and publishes it with a month-and-a-half time lag from the reference month. The level of IIP is an abstract number and its magnitude represents the production status for a given period, compared to a reference period. The base year was fixed so that the year was assigned an index level of 100.

The recent IIP report for November 2016 by the CSO with 2004-05 as the base year has been compiled using data that was received from the following 15 source agencies: 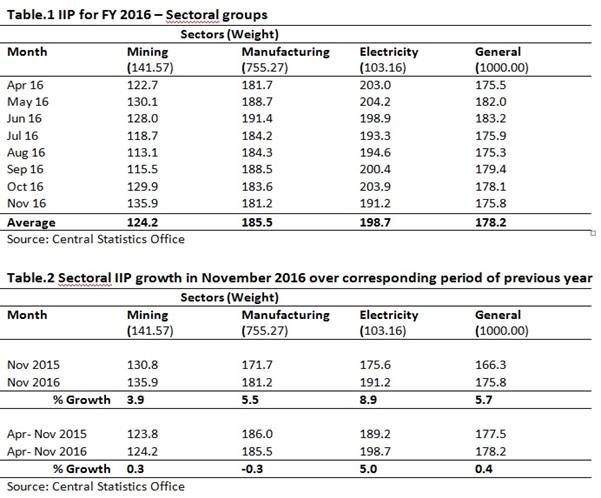 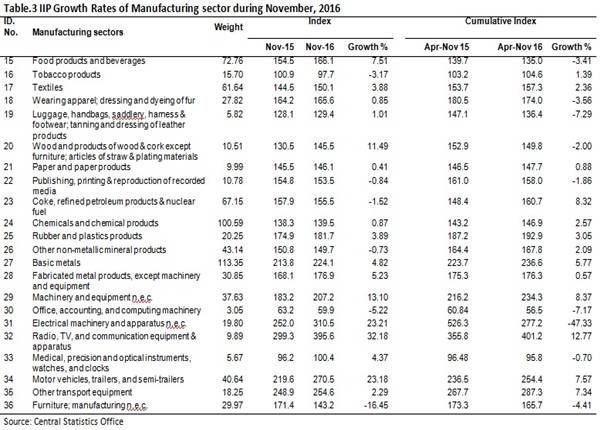 Changes in trend was high for IIP of apparel, dressing and dyeing of fur group with the maximum IIP (235.9) being seen in March 2016 and minimum IIP (139.4) being observed during October 2016.