Home / Knowledge / Article / Analyst Corner / TPP: US withdrawal and its effect on China and Vietnam

TPP: US withdrawal and its effect on China and Vietnam

US President Donald Trump's decision to withdraw the US from the TPP agreement could prove to be useful for China as it will get access to the entire Asian market. However, Vietnam stands to lose a chunk of its market, considering that it exports 20 per cent of its products to the US, a Fibre2Fashion report.

The Trans Pacific Partnership (TPP), a trade agreement between twelve Pacific Rim countries, was signed on February 4, 2016, in Auckland, New Zealand. These 12 countries are the US, Malaysia, Japan, Vietnam, Brunei, Singapore, New Zealand, Australia, Canada, Chile, Mexico and Peru. It is awaiting approval to come into force, but due to the US withdrawal from the agreement on January 23, 2017, it cannot be ratified. If the agreement is not approved by all the countries before February 4, 2018, it will be implemented after approval by at least six states, which together have a gross domestic product (GDP) of 85 per cent of the GDP of all countries.

The Obama administration had claimed that the agreement intended to promote economic growth, retain jobs, enhance living standards, reduce poverty, ensure good governance, enhance labour and protect the environment of the member countries. The TPP negotiations began in 2005, and was signed by Brunei, Chile, New Zealand and Singapore. In 2008, Australia, Canada, Japan, Malaysia, Mexico, Peru, the US and Vietnam joined the group. 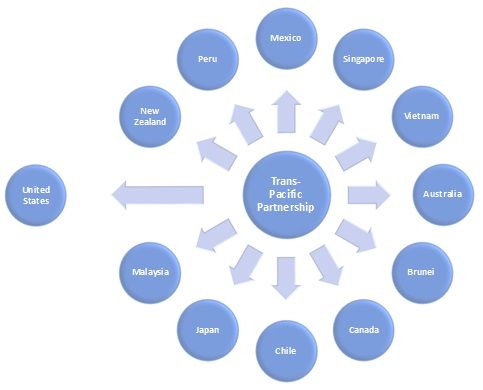 TPP's future after US withdrawal

The TPP's future is uncertain after the US withdrawal, but some countries have shown interest to rework the agreement without US participation. New Zealand has planned an alternative deal without the US. Australia's trade minister, Steven Ciobo said that he has spoken to other leaders of TPP member countries to discuss ways to lock the benefits from the TPP without US participation in the partnership. However, Prime Minister of Japan, Shinzo Abe has said that the TPP without the US would be worthless.

US President Donald Trump and his trade team have made it clear that their principal goal is to stick it to China. Withdrawing from the TPP will have exactly the opposite effect. It will be a gift to China, and no one is happier about the development than the government of China. Chinese President Xi Jinping has said that China would be happy to take over the leadership role in global trade that the US has now surrendered. This will be good for China, but not for the other countries. US withdrawal from the TPP could free Mexico from dependence on the US for trade.

After US withdrawal from the TPP, China will have an opportunity to fill up the void. China plans to create an Asian free trade pact. It would allow the country to do business across the same national borders, which Obama hoped that the US would do, that will help China to strengthen its position as an economic power in the region. The Chinese wanted entire Asia for themselves, and Trump just gave it to them. China also has its own Asia-Pacific trade deal, the Regional Comprehensive Economic Partnership (RCEP) that excludes the US. This traditional trade agreement involves cutting tariffs instead of opening economies and setting environmental and labour standards like TPP would have.

It is expected that the US and China could soon be in a trade war, with both sides prohibiting the other's products. This would adversely affect the economies of both, and have ripple effects that could considerably impact countries in Europe and Asia.

With US withdrawal from the TPP, emerging market Vietnam on the face of it seems to be standing at the losing end. Vietnam has said that it would stick to the deal even without the leading party of the agreement, and will continue to attract foreign direct investment (FDI). The US is the top export destination for Vietnam, accounting 20 per cent of all exports. On the other hand, imports from the US are 5 per cent of all Vietnamese imports. Several US-based companies have been shifting their production from China to Vietnam in search of less bureaucracy and lower production costs. But Vietnam would fail to benefit from the US market for its textile and footwear industry.

Recently, Vietnam signed a number of trade agreements with various countries that could attract foreign investments in the future. There is a possibility that instead of the TPP, the US might negotiate and accomplish alternative trade agreements with Vietnam. It cannot be denied that the country can attract foreign investment capital through the TPP, and it has also reframed regulations and legal policies to adopt the TPP. The new framework would create more opportunities in the process of international economic integration of the country, and encourage investors from foreign countries to set up business in Vietnam.

The TPP not being approved by the US will not have negative impacts on Vietnam. It has its own value in growing mid-income earners, competitive labour and stable government for attracting FDI. Vietnam is considered to be among the big winners and expected to boost its growth by 12 per cent in the coming years as firms move factories to the low-wage country.

The pros and cons

�         Without the US declaring its leadership in Asia, China is slated to expand its influence;

�         This could put US businesses at a competitive disadvantage;

�         The US withdrawal could alter its relations with trading partners;

�         Withdrawal of TPP could be a sign of what's to come for the North America Free Trade Agreement (NAFTA).

Moreover, even if the TPP dies, major benefits of this agreement can be saved through various other means like bilateral FTAs. Multiple bilateral deals may not be as impressive as the TPP agreement led by the US, but they could be an option for nations like Malaysia, Japan and Vietnam, which do not have bilateral agreements with the US as opposed to other existing TPP members.