The global demand for textile fibres is expected to witness a growth of 2.5-2.7 per cent between 2016 and 2021, primarily driven by increasing consumption of MMF due to limited cotton production and supply coupled with other factors such as lower prices of MMF. A Fibre2Fashion Market Intelligence report.

In the past three decades, when global population grew by 35-37 per cent to reach 7.3 billion, consumption of fibres reached 84,870 KT by registering a growth of almost 140 per cent. While the global increase in population is one of the basic drivers for increased consumption of textile fibres, there are other factors such as rising incomes, more affordable fibres, textiles and apparel products as well as changing attitudes to traditional textile products - used increasingly as disposable fashion, that have also played an important role in the growth of the global textile fibres demand all these years. Population growth and growing food products demand have completely changed the textile fibres consumption scenario with MMF dominating the market with more than one-third of the overall consumption in 2011. 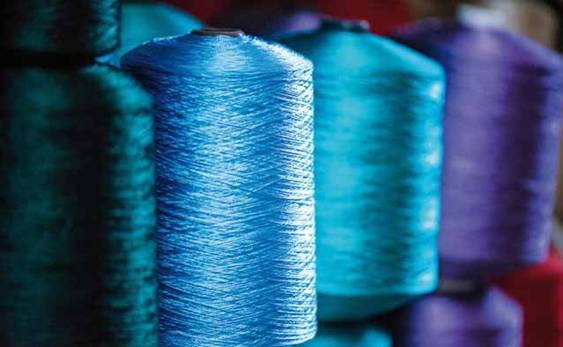 Further, according to the United Nations, the global population is estimated to reach 8.1 billion by 2025 and is moving up the food chain creating nearly 35 per cent of the additional demand for food products, resulting in fierce competition against other crops for arable land. This increase in population, on the other hand, is expected to shrink the limited availability of arable and cropland by creating a food crisis and hence limiting the availability of the arable land and stagnating cotton production.

On the other hand, increasing population is also expected to increase the demand for textile fibres-both natural and man-made-by nearly 60 per cent, resulting in more consumption of MMF. This would be so since availability of raw materials for the production of MMF is expected to be available virtually on an unlimited basis for the next few decades and will cost significantly less than natural fibres. Apart from this, one more factor which ensures this unlimited availability is the recycling of MMF as against that of natural fibres, and the freedom of using these fibres in research and production to alter properties to make it suitable for newer applications. These factors are expected to be a major demand driver for MMF in the near future as well as in the long term. 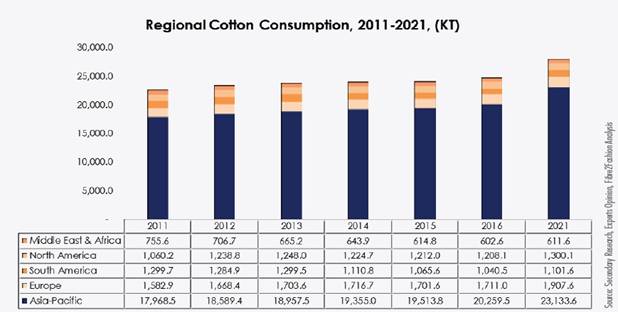 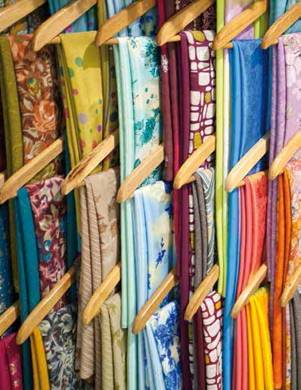 Globally, prices for cotton fibres are expected to remain stable due to the clearing of stocks by China, and lower prices of MMF due to weak crude oil prices. Demand for cotton fibres is expected to grow at a slower rate than MMF as the growth of textile fibres in turn is driven by emerging economies where synthetic fibres are gaining more penetration in textiles fabrics, as well as due to increasing consumption of synthetic fibres in industrial applications. 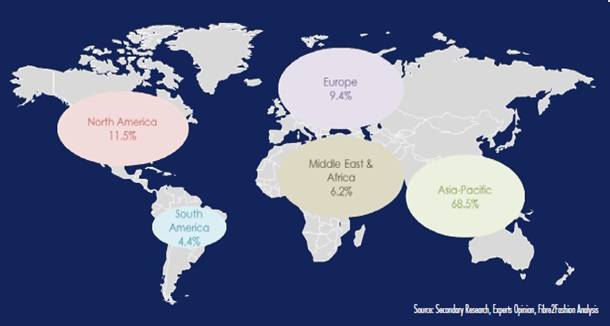 Both increasing population and increasing consumption of textiles, coupled with limited production of cotton is expected to widen the cellulosic gap further with each passing year. The only substitute available to cotton due to its favourable properties is viscose staple fibre (VSF) and it is estimated that cellulosic fibres will still account for 33-37 per cent of the total fibre as certain properties of cellulosic fibres, especially their physiological performance, makes it difficult to be substituted by petroleum-based synthetic fibres. Hence, viscose staple fibres being both an ideal substitute for cotton and being sustainable, are expected to fill this cellulosic gap providing a great opportunity for VSF manufacturers.

Overall, the global demand for textile fibres is expected to witness a growth of 2.5-2.7 per cent between 2016 and 2021, primarily driven by increasing consumption of MMF due to limited cotton production and supply coupled with other factors such as lower prices of MMF and increasing consumption of MMF into other applications such as home textiles and industrial products. Also, another major driving factor would be the product and process innovation in both traditional and non- traditional textile product areas using MMF.

By:
Market Intelligence-Fibre2Fashion
Published: Apr 2017
Reuse this Content
Our Clientele