By: Market Intelligence-Fibre2Fashion
Published : May 2017

Acrylic is a synthetic fibre made from the polymer, polyacrylonitrile. It was first manufactured by DuPont in the mid-1940s under the trademark Orlon. For the next decade, it was not manufactured in huge quantities. It is first manufactured as a filament, after which it is cut into short, staple lengths and spun into yarn.

As acrylic is a strong fibre and has a warm property of natural fibres like wool, it is substituting wool in many applications. It has many uses in garments, home textiles, the industrial sector and other fields.

Acrylic staple fibre (ASF) is mainly produced in China, north East Asia, south Asia, and south East Asia, the Middle East, Africa, east and west Europe and in a few parts of the Americas. The world's largest manufacturer and consumer of ASF is China. 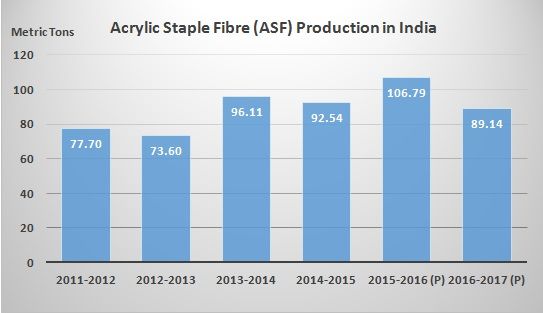 In India, overall annual production capacity of ASF is 147.40 MT. There are six major manufacturers. As the graph shows, ASF production is expected to decline in 2016-17 by almost 17.65 metric tons compared to 2015-16, which is a sharp shrinkage of around 17 per cent. Indian ASF production grew at a CAGR of 2.79 per cent for the period 2011-2016, and is expected to continue growing parallel to its demand. 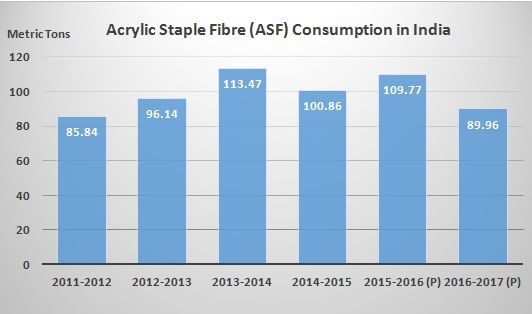 Due to higher cost of production and low profit margin, ASF production and demand are shrinking simultaneously in India. As shown in the graph, ASF consumption is expected to decline sharply in 2016-17 by almost 19.81 metric tons compared to 2015-16 or around 18 per cent. Application of ASF is limited, which is bound to reflect on its growth. Demand for Indian ASF has grown at a CAGR of 0.94 per cent for 2011-2016, which is expected to continue its scale of growing parallel with its demand. 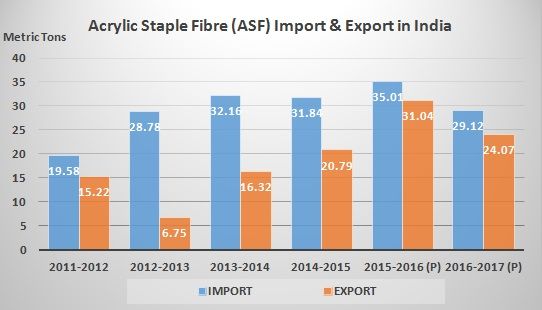 Following the plunge in the ASF production and consumption in India and other international markets, import and export of ASF is badly affected. As shown in the graph, ASF import and export are expected to decline in 2016-17 by almost 5.89 metric tons and 6.97 metric tons respectively compared to that during 2015-16. This is a sharp drop of around 17 per cent and 22 per cent respectively. 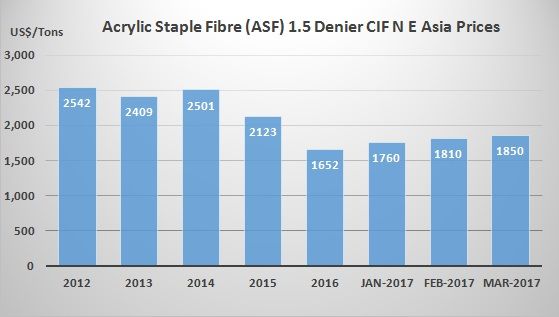 ASF prices continue to suffer from higher propylene prices and high conversion charges of acrylonitrile. In the last five years, there was considerable price movement in ASF prices in north East Asia following crude oil price fluctuations and movements in demand and supply of the ASF market. Although there was continuous price fall in the last consecutive years in the ASF market, market experts believe it is expected to grow marginally in the coming years.

ASF has many properties. It is soft, warm, lightweight, hypoallergenic, easily pigmented and less expensive compared to natural fibres. So, its application is increasing day by day in different sectors as less wool and cotton come into the market.