India's textiles and apparel exports, particularly the fibres segment, grew at a healthy rate of 8 per cent in the first quarter of the current financial year 2017-18. Imports, on the other hand, have increased drastically-by 23 per cent, according to the latest quarterly report of Wazir Textile Index, a textiles sector performance update from Wazir Advisors.

The financial advisory firm had recently introduced its Wazir Textile Index (WTI) as a barometer to periodically assess the financial performance status of the Indian textiles industry. 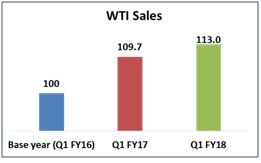 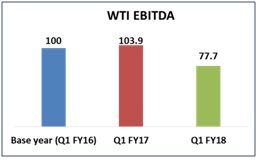 The WTI Cost for raw material (RM), manpower and others were 122.2, 130.5 and 112.9 in Q1 FY18. There was a significant increase in raw material prices which resulted in overall costs, while manpower costs increased on the back of increasing labour wages. Consolidated RM cost constituted 54.9 per cent of sales in Q1 FY18, while consolidated manpower costs constituted 9.8 per cent. The impact of the cost increase was visible in the declining EBITDA margin.

Slight decline in key economic indicators in Q1 FY18: In Q1 FY18, India's real gross domestic product (GDP) increased from Rs29.40 lakh crore to Rs31.10lakh crore from last year's Q1, growing at a rate of 5.7 per cent. This was a much lower growth than previous year's quarter growth of 7.9 per cent. The average index of industrial production (IIP) for textiles has declined by 2 per cent while the IIP for apparel declined by 3 per cent in Q1 FY18 compared to Q1 FY17. The wholesale price index (WPI) for textiles registered an increase of 3.5 per cent in Q1 FY18, indicating increase in prices.

Textile and apparel exports grew healthy in Q1 FY18: The overall textiles and apparel (T&A) exports in Q1 FY18 was US$ 9.5 billion increasing at a healthy rate of 8 per cent over the previous year. Exports of fibres, apparel, home textiles and filament has grown in Q1 FY18 as compared to Q1 FY17. The highest growth was observed in exports of fibres growing at a rate of 48 per cent. Exports of yarn fell by 11 per cent in Q1 FY18. The US and UAE were the largest export markets for India with a cumulative share of ~35 per cent. The share of the UAE increased slightly in Q1 FY18.

India's T&A imports increased drastically in Q1 FY18: The overall T&A imports in Q1 FY18 was around US$ 1.7 billion, increasing significantly at a rate of 23 per cent from the previous year. The import growth in Q1 FY18 was primarily attributed to a tremendous increase in fibre imports by 99 per cent over Q1 FY17. However, imports of other major categories like yarn andhome textiles declined significantly. China continues to be the largest import partner for India. The import share of the US has increased significantly from 7 per cent to 13 per cent in Q1 FY18, while that of Bangladesh declined from 10 per cent to 4 per cent.

Overall, the Indian textiles and apparel mill sector exhibited growth in overall sales during the first quarter of financial year 2017-18. However, there has been tremendous pressure on margins due to increased input factor costs like raw material and manpower resulting in steep decline in EBIDTA levels.