The textile spinning mill is a continuously running unit that consumes a lot of electricity. Any small or big step to conserve electricity is always welcomed by mills. Every unit of electricity used in the industry is monitored.

The Bureau of Energy Efficiency's (BEE) aim is to monitor energy consumption and suggest efforts to reduce it. A kilowatt (kW) saved every hour equals saving Rs 50,000 annually.

This paper suggests that retrofit to carding cylinder under-loaded motor saves around 15 units per day, and Rs 30,000 is saved in a year for Rs 10,000 invested now. This is the first year return of energy conservation measure in this motor and it goes on. Whatever we implement to reduce energy loss in motors, it amounts to a decrease in the units per kg of yarn. First, we have to conduct an initial motor loading survey to assess the loading of motors - whether these are over-sized, rightly-sized or under-sized - to confirm the motor is rightly loaded.

Mills have several carding machines of different brands and machines are getting advanced nowadays for higher productivity and lower power consumption. 'Well carded is half spun' is the mantra followed now by many mills in their spin plan. They allot in the spin plan to match each card to each ring frame production. Mills understand now that the carding machine has to be run at a slower cylinder speed to improve the overall carding and spinning quality of yarn.

A typical case study of carding cylinder motor in any textile mill is that the cylinder is a heavy rotating mass run by its motor. Hence all original equipment manufacturers (OEMs) of carding machines oversized their motor to say 5.5 / 7.5 / 9.3 kW rating to give a robust starting torque to the motor to rotate the cylinder.

All old carding cylinder motors are conventional ones having standard efficiency norms, peak efficiently at around 75 per cent band and are IE 1 versions as per latest international efficiency (IE) norms.

Earlier, mills wrongly applied the idea of star loading the motor, manually changing the motor terminals to star connection, and permanently running the motor always in start mode. This short-cut exercise made the motor hotter initially and within a few days, it got overloaded and burnt. The reason is the cylinder sides are choked with fluff. So instead of running in delta, since the motor was already in star connection, it failed due to wrong running in star when load is above 50 per cent. This means manually putting the motor in star mode is not the right solution. Automatic delta to star (Δ to Υ) is the cost-effective solution.

Here the low-cost solution is to retrofit automatic Δ to Υ convertor to the control circuit of carding cylinder motor. This allows the motor to run on star mode automatically and gives 10 to 15 per cent on the motor running kW. Moreover, this reduces the kVA (kilovolt Ampere) demand from motr end as well. 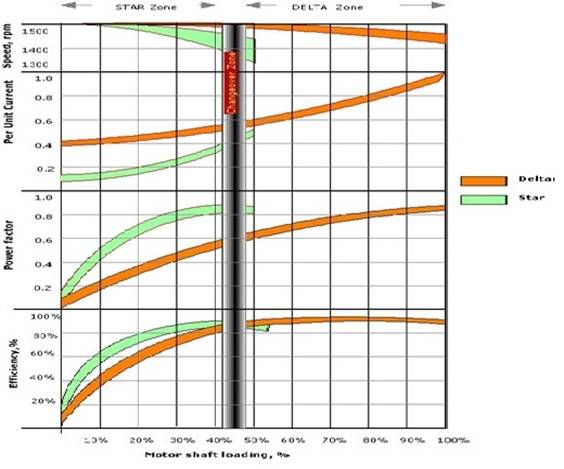 Carding-machine-cylinder motor is loaded at one third of its rated KW only, during its running condition

The vertical dark band (40 to 45 per cent loads) is the 'changeover' region, which differentiates the possible delta operating zone (right hand side) and star operating zone (left hand side). Observing the efficiency curves, it is clear that at light loads (30 per cent or less), operation of motor in star connection can save energy, as the efficiency is significantly better. It should be noted that at light loads, changeover to star connection results in a drastic drop in current.

For same given production, the power saving varies from motor to motor based on its derating.

If a motor is oversized and continuously loaded below 30 per cent of its rated shaft load, the motor can be run on start in Y to Δ mode and run using the Δ to Υ changeover convertor. If the motor is normally loaded below 30 per cent, but has a high starting torque requirement, then it can be started with a suitable starter and after overcoming the starting inertia, can be automatically switched from Δ to Υ, using timer control or current sensing. However, if the changeover is frequent, the contactors will get worn out and the savings achieved may get neutralised by the cost of frequent contactor replacements.

There are two options available to this constantly-underloaded motor, which is having a high initial torque during start and run at under loading only. One is the automatic Δ to Υ convertor retrofit and the other, the expensive one, is opting for a variable-frequency drive (VFD) for the motor. But VFD is not suitable for carding cylinder motor due to long duration of initial higher current. Since the motor is always constantly loaded, this automatic Δ to Υ (delstar) convertor will offer the energy savings in running this under-loaded motor. 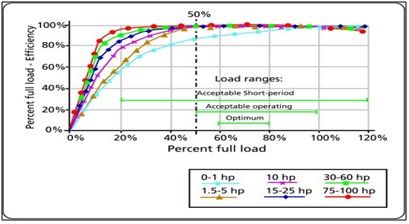 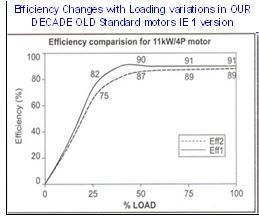 In the electrical distribution of mills, the auto delstar retrofit to an existing motor reduces the kVA demand from the motor to the incoming side. Normally, the carding machine reads only around 0.60 PF, and this demands more kVA from the load.

By retrofitting this auto delstar to this cylinder motor circuit, the above problems get solved partly. Earlier, the PF measured was 0.50 and now after the retrofit, the PF goes up to 0.90. The cylinder motor is the only heavy rated motor in the machine panel. This is only pulling the PF down and hence carding SSB PF is around 0.5 only.

By retrofitting this gadget in all the carding machines, the carding SSB PF automatically goes up to 0.90 PF, thus reducing the kVA demand from the carding section side.

If one has a batch of 10 carding machines and SSBs record only PF 0.5 due to poor loading, one is forced to put heavy capacitor banks at the incoming carding SSB and at the MV panel in the power house. Since it is harmonic multiplied now due to this addition of capacitor at the incoming of non-linear load, additional over-sized passive and active harmonic filters need to be put in the power house.

First, the power factor of the under-loaded motors should be improved at the load ends as this will load-end compensate the PF lagging loads, reduce the line-losses, reduce the voltage drops existing now, and also reduce the capacitor requirements in the overall electrical distribution system of the mill.

Through condition monitoring of the carding machine and its cylinder motor, it is assumed the cylinder load is constant. But actually, it is not. As the sides of the cylinder are loaded unevenly with cotton fluff material in the course of running for a few weeks, the cylinder motor power goes up and automatically lands into delta rating by this convertor. In case this machine was connected in star mode manually, then this heavily loaded motor in star mode will instantaneously kill the motor.

Being automatic, the gadget can be made user-friendly by setting to give alarm audio/visual inside the department. This visual alarm from delstar will alert the user that his carding cylinder motor running in delta mode needs timely servicing to bring down its load.

A partly loaded motor or under-loaded motor is not only there at the carding cylinder motor. Such motors are there in ring frames used for fine counts of yarn DOFF stages that run for more than ten hours, out of which, say 4 hours can be run on star mode automatically by a delstar.

The delstar finds its applications in mills in other motors like AC plant motors and waste collection motors. It is a low-cost retrofit that offers instant results on being hooked up to the existing motor, though costlier options, such as VFD, closed loop VFD and EE motor replacement, are available for the above load patterns and applications.

OEMs design and provide a factor of safety in loading operations and conveniently oversize motors, considering the safety aspects only. The industry must take up this motor load survey exercise as a priority now. The right-sized motor for machines as per instantaneous kW and kVA figures and cumulative kWH and KVAH values needs to be identified. For old standard under-loaded motors with less efficiency, reducing primary voltage input to that motor from 415 to 230 Volts (using the star delta start and in run mode) is the available option.

About the author: Ashok Senthuraman is a BEE-empanelled and accredited energy auditor from Coimbatore in Tamil Nadu and the chairman of the Coimbatore chapter of the Indian Association of Energy Management Professionals (IAEMP). K Ramesh Babu is a specialist in motor power saving solutions in Coimbatore. 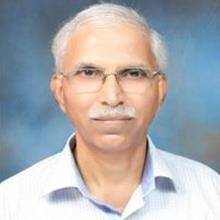