The sixth edition of Asia's biggest textiles event-the ITMA Asia CITME 2018-promises to break its own earlier record in terms of both size and scale. Subir Ghosh presents a curtain-raiser.

A hundred thousand visitors is a big number for a trade show, especially when most of them were ones making a frantic beeline to attend the event as business visitors. That's how big the last ITMA Asia CITME 2016 at Shanghai, China was. The latest edition of the bi-annual five-day event that gets under way on October 15 at the National Exhibition and Convention Centre in China's biggest city and commercial hub is expected to relegate those numbers to the history books.

It is, to bluntly state the obvious, one of those #MustVisit trade events for the global textiles-apparel fashion industry. Not only because it is being held in China, the world's biggest player in the theatre, but also for the reason that what's on display today well indicates which way the industry would be headed in the next few years.

Of all the investments made in the textiles-apparel-fashion industry, those in machinery are the biggest. For that very reason, investments are hardly ever for the short run. Those putting in the money are there for the long haul, and those manufacturing the machineries are people either setting trends for the future or are those who know which way the ball will roll. And given that in today's time, technological advancements take place at such a furious pace, making the right machinery choice becomes critical to a textiles-apparel company's future. 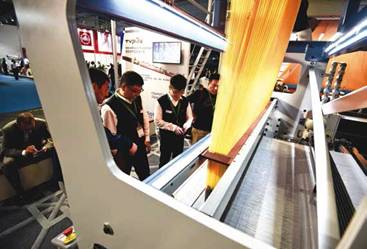 All Roads Lead to China

By the middle of the first decade of this millennium, China had well entrenched itself as the manufacturing hub of the world. It also formed the core of the global textiles-apparel industry. So, when it was announced in 2007 that the biggest event of the industry, ITMA, was tying up with CITME for a mega machinery show the next year (christened ITMA Asia CITME 2008), it was reckoned to be the perfect blend for customer-supplier interaction. The official announcement itself put it clear: "The partnership brings together the technological power of the CEMATEX countries in Europe and the massive market for textile innovation provided by Chinese textile producers."

The 2007 announcement had described it as the only Asian exhibition to have CEMATEX and CTMA support. It was meant to keep "the momentum created by the two previous ITMA Asia shows in Singapore, in 2001 and 2005. And it now dovetails with the four-yearly ITMA shows in Europe, to form a global calendar of premier textile machinery events. ITMA Asia CITME 2008 is scheduled to be staged every two years and details are currently being discussed for the 2010 edition."

It was, for sure, a meeting point of European technological prowess and Chinese production capabilities-certainly so at the time. But this was no session of closed-door parleys. So, the event assumed enormous significance for the global textiles-apparel industry. And over the years, this has only grown. If you are in the industry, you cannot afford to give it a miss. 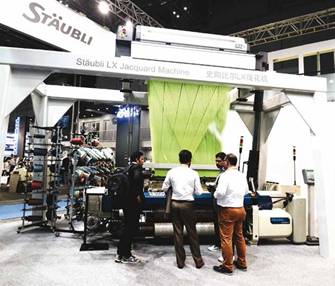 The sixth edition of ITMA Asia CITME is already a sell-out. Over 1,600 textile machinery manufacturers from around the world would be showcasing their state-of-the-art products over the entire 170,000 sq m of exhibition space. Chinese manufacturers would take up the largest area, followed by Germany, Italy, Japan and Switzerland. Sector-wise, spinning machinery forms the largest sector. This is followed by finishing and dyeing, knitting, weaving and nonwovens, according to the organisers.

Fritz P Mayer, president of CEMATEX, said in a statement: "We are delighted that the combined exhibition has continued to garner strong interest. It proves that our exhibition is the industry-leading platform in Asia for textile machinery manufacturers to showcase a wide spectrum of cutting-edge solutions." Wang Shutian, president of CTMA, added: "Interest in the combined show remains extremely strong, especially from Chinese textile machinery manufacturers. As China's textile industry continues its transformation, the demand for advanced machinery and technology is on the rise."

Broadly, the exhibitors/products would be classified under spinning, weaving and texturing; nonwovens; braiding; research and innovation; weaving; knitting and hosiery; garment making and embroidery; printing; equipment for plant ops, logistics, services for textile industry, software and testing; and colorants, chemicals, finishing and recycling. In short: the works.

Many of the 1,600-odd companies at the event would be showcasing their latest offerings around the twin themes of sustainability and Industry 4.0/Textiles 4.0.

German textiles machinery leader Karl Mayer has lined up products treading this line. As an ongoing technology transfer project being carried out in Wujiang Shengze, China, has been demonstrating, environmentally harmful looms are being replaced by Karl Mayer's warp knitting machines through a comparable product portfolio. The alternative being offered is the TM 3, a tricot machine which will be on display at the fair. The company will also be showing the Terry. Eco concept for eco-friendly production of terry goods, the core element of which is the TM 4 TS-EL machine. The German manufacturer is offering weaving companies involved in the production of terry goods a sizing machine based on sustainability factors. The core element, the VSB Size Box, will be on display at the event.

The working of the widest high-speed tricot machine in the world, the HKS 3-M, 280", will be demonstrated to the visitors, as would be the first TM model with KAMCOS 2 facility-the TM 3, 186", which is equipped with the next generation of the Karl Mayer Command System and retains the tried-and-tested features of the HKS version. For the warp preparation sector, there would be the VSB Size Box, besides the ISODIRECT direct warping machine, which offers a unique cost:benefit ratio. All these would be backed up by a presentation of a wide range of applications of warp-knitted fabrics.

Italian supplier of winding, twisting, and rotor spinning machines and a specialist in yarnfinishing segment, Savio, will present energy-saving and Industry 4.0 solutions-the Polar Evolution and Eco PulsarS winding machines, besides an Industry 4.0 corner with smart solutions for mill monitoring. The Polar winding machines have been recently developed in its Evolution series, gathering innovative solutions in terms of technology, efficiency, quality output and maintenance. The machine on display will be a round magazine feeding one, provided with an efficient and fast automatic doffer. On the other hand, the Eco PulsarS can save up to 30 per cent power with the 'Suction on Demand' system. This machine is a response to the market demand of energy-saving, including room air conditioning, together with improved production performances, high quality packages, and a range of automated solutions.

The company will present the Savio Winder 4.0, a smart industry solution for textile mills. Savio winding machines can be equipped (upon request) with smart solutions for connectivity, data management, remote machine setup, and operator real-time interactivity. The Savio Winder 4.0 data management system is a modern and important management tool, relieving mill management staff of time-consuming routine work. Driven by data analytics, a wealth of data is up for harvesting, allowing for the management of the different production phases in the best possible way and monitoring of all significant parameters anytime and anywhere with use of mobile devices.

Swiss company will also unveil its Beampro yarn repeat reading-in machine, an automation aid at the sizing machine for sizing coloured warp sheets. Besides, there would be the latest high-position rotary dobbies for water-jet applications, the S2658 and S2678 series; the S1300 and S1600/S1700 series of cam motions; and two jacquard installations featuring different kinds of weft insertion. These would be complemented by the recently launched D4S device on two circular knitting machines. This automation solution allows closing the toe of the sock directly on the knitting machine. It significantly shortens the sock production process.

Gneuss, a supplier of innovative solutions for the plastics processing industry, will display turnkey recycling lines for the processing of bulky and contaminated PET industrial waste. The Gneuss recycling line is an optimum solution for voluminous waste with a low bulk density, start-up lumps and waste such as fibres which are coated with spin finish oils. The system is compact and energy-efficient as no additional heat input is required. The fibre waste can be directly reprocessed, without detrimentally affecting the quality of the end-product. 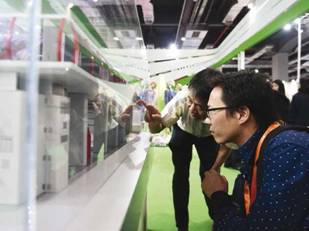 Leading German manufacturer of flat knitting machines, Stoll, will present its new ADF 830-24 W knitting machine which has a wide range of applications. It is equipped with the Stoll-weave-in technology that allows knitting of textiles with weave-like optics and properties. It is essentially a product advantage that directly affects form, comfort, and flexibility: unlike traditional knitwear, weave-like textiles are more stretchable and more comfortable depending on the type of knit. In addition, they can already be preformed in the machine and provided with 3D elements. The product also scores with yarn carriers, which are independent of the carriage and allow a high degree of flexibility.

Textechno Herbert Stein GmbH of Germany, along with partner Lenzing Instruments of Austria, will introduce testing instruments for fibres and yarns. Textechno's Balexpert and Spinexpert, both from its newly designed fibre classifying system (FCS), determine the quality and spinnability of cotton and synthetic fibres. The fully-automatic Statimat DS combines the most important test methods for spun yarn. In automatic single-fibre, it would be the Favimat ; for automatic capacitive evenness testing for filament yarn, Covamat; the all-in-one solution for automatic filament yarn testing, Dynafil Me .

Saurer will present its new 'senses' control centre-an innovative control and analysis tool that furnishes textile companies with digital senses for more profits along the textile value added chain. The system, to be available next year, collects, aggregates and analyses the production, quality and machine data of the entire textile fabrication process across all locations. The data is available to operators on the mill floor as well as mill and company management via an intuitive web interface and standardised ERP interfaces anywhere, even on the move. The new software is non-proprietary, and not only evaluates the production and quality data of Saurer textile machines, but also integrates machines from other manufacturers into the innovative information and control system. A clincher: Senses is being projected by the Swiss manufacturer as being suitable for companies of all sizes. 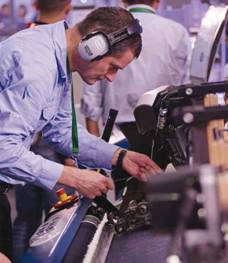 A new drum winder will be showcased by SSM, supplier of precision winding machines in dyeing, weaving and sewing thread preparation. With the CWX-W, the power consumption per spindle is lower than usual (down to 35 watt, depending on parameter settings). The small pitch and integrated control cabinet maximise the space utilisation, and with the single controlled motor, it is an ideal machine for an energy-efficient rewinding of cones used in the weaving, warp knitting, and circular knitting process. SSM will also display a winding machine for the preparation of low-density muffs made of high-elastic yarns, which preserves the highest possible residual elasticity of the yarn throughout the dyeing process.

Mayer & Cie (MCT), global manufacturer of circular knitting machines, will present its latest range of electronic textile machines-the Spinit 3.0 E, the OVJA1.6 EE 3/2 WT and the OVJA 2.4 EC. The Spinit 3.0 E spinning and knitting machine offers benefits in the manufacturing process. To produce a single jersey, it would require much less energy, time and space than the conventional process. The OVJA 2.4 EC, on the other hand, is a full jacquard machine that outperforms Chinese manufacturers' conventional models in productivity, and with a three-way-technology, it offers great variety in design patterns. It is aimed at Chinese customers who produce fabrics for outer garments, sports, and leisurewear. The OVJA 1.6 EE 3/2 WT uses a three-way technology in the cylinder and two way technology in the rib dial that ensures a very wide range of patterns for the multi-colour jacquard machine which can at the same time produce a hole-structure look by multiple tuck loops.