The handloom sector, in spite of many sporadic and scattered efforts, continues to be on a decline. Baqar Iftikhar Naqvi and Neha Singh look at the trends and challenges.

India is the largest contributor of handloom fabrics in the world, with over 95 per cent of the world's handwoven fabric coming from India. 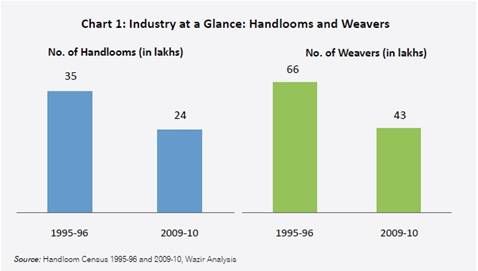 With over 43 lakh people directly and indirectly involved in production, the handloom industry is the second-largest employment provider for the rural population in India after agriculture. The handloom weavers are classified on the basis of organisation that they produce for into cooperative, master-weaver and independent weaver segments.

The industry has strong infrastructure, with about 24 lakh looms of varied designs and construction, indicating significant production capacity. However, the industry is facing challenges with declining number of weavers and looms over the years, as the next generation of weavers do not want to do weaving but engage in other economic activities.

The strength of the handlooms sector has been its regional focus and specialisation, their products being adapted to the local traditions, religious and cultural practices and community needs.

The handloom production in India over the years is shown in Table 1.

With a decline in total production last year, the export for handloom products has also declined. The export statistics are shown in Table 2.

The major reasons cited by the ministry of textiles for the decline in exports were economic slowdown in the European Union (EU) and low demand in the US, which are the two major importing markets for Indian handloom products.

The handloom scenario for different states of India is shown in Table 3.

The government of India as well as private players and designers are putting in efforts and taking initiatives to promote the handloom sector through various activities. Some of the key initiatives in past few years are as under.

The handloom industry is going through a crisis for the past couple of years, and there are too many issues that are constraining development of this sector. Some of the key issues are as under:

In spite of its immense potential and hence growth prospects, many problems and challenges haunt the handloom sector in India. To retain market share and enter new market segments, the sector needs a well thought-through strategy, supported by trade partners and an effective policy framework.

The industry needs to respond to the market demand and developments to remain relevant in the market and attract consumers. Today, a consumer has multiple choices in the market, and to remain competitive and grab a consumer's wallet share, one has to remain relevant to market demands. The handloom sector needs to focus on product development and innovation in terms of modern designs, new product categories, contemporary colour palettes, variety of fabrics, etc.

One big problem is the high price tag compared to similar products (powerloom and mill-made) available in the market. But, these are handmade and require intensive labour work, and hence they become expensive by default. The actual issue is the price vs. product vs. channel mismatch, which does not provide expected perceived value to an end-consumer. To overcome this problem, handloom players need to match the products and channels to the prices offered in order to balance out the product vs. price vs. channel scenario so as to provide a higher perceived value to consumers.

The handloom sector lacks market linkages and appropriate promotions/ communication with the consumers as well as key stakeholders. Handloom needs to be promoted as just more than a handmade product which consumers purchase for betterment of weavers and their livelihoods. The Government of India, state governments and leading brands and retailers need to come forward to support the weavers and the handloom industry to promote the USPs of handloom products to endconsumers, and also by providing support in terms of design/product innovation, raw material supplies, technology advancement, marketing support, co-branded advertisements/promotions, etc.

One of the important aspects of handloom promotion is awareness among consumers. Consumers are aware about the literal meaning of handlooms, but lack knowledge about key attributes. Consumer awareness programmes and campaigns need to be conducted at pan-India and international levels to educate consumers about handlooms, and hence broaden the consumer base.

At the end of the day, the handloom sector needs to improve overall in terms of an organised and professional approach. To regain its lost position and glory, handloom industry stakeholders, weavers, cooperative societies, Central and state governments, private players as well as consumers need to re-align and work together in overcoming the current challenges.