In a country like India, artisans find it difficult to compete in the market without formal training and business education. The Somaiya Kala Vidya design institute in Gujarat is providing the necessary push to artisans and turning them into full-fledged designers, reports Paulami Chatterjee.

When Akram Jusab Khatri was just two years old, his family was devastated by the Gujarat earthquake of 2001. The home that had once served as a shelter for the family, nestled in the hinterland of Dhamadka, was decimated in seconds. But Akram's desire to be a successful craftsman pulled him through the ordeal and kept the fire burning in his belly. 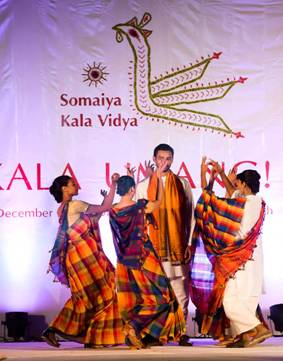 Akram's grandfather had forged a rich tradition for the family, having immersed himself in creating traditional garments, known as sadlas, in the town of Vagad in Gujarat. It was only after he was gone that Akram's father, Jusab, moved the family to Dhamadka, where he continued the legacy of cloth printing that his own father had begun. The ardour for block-printing and dyeing was a precious inheritance passed down generations in the Khatri family. So, when Akram was in his final year of school, he taught himself block-printing and dyeing, intending to pursue a livelihood in textiles.

There are many like Akram who lost their means of livelihood and survival in the 2001 quake or those who had dreams in their eyes but not sufficient monetary support to live the same.

The scenario is typical of a country like India, where Indian artisans find it difficult to compete in the market without formal training and business education, which often make them less motivated to pursue their craft for a living. It eventually leads to the loss of technical skills, craftsmanship, and death of an important part of our cultural heritage. 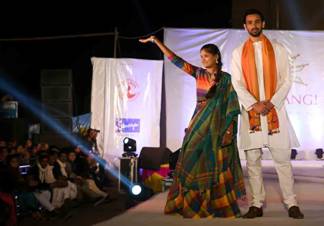 In 2016, the Gandhidham-based Somaiya Kala Vidya (SKV), a design institute meant exclusively for artisans, came up with a plethora of opportunities for the likes of Akram, which they had never explored before. Judy Frater founded the institute in 2014. The institute is the first-of-its-kind academy imparting artisans with a deeper understanding of culture and arts, promoting excellence in design, and raising the income and ethics of those engaging in craft.

Each year 10-12 traditional textile artisans are taken on board in SKV across different craft forms to provide them with all essential tools to help establish themselves as individual artisan designers. For a period of one year, each student is provided with design education by a faculty member who prepares them for launching their first collection of textiles or products.

"After the earthquake of 2001, we sold our traditional blocks. I didn't know my ajrakh tradition. At SKV, I realised its value," says Shokat Ayub Khatri, SKV Class of 2018. 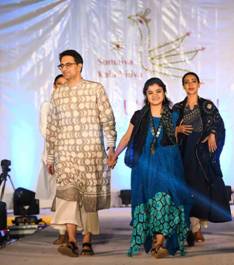 At the event, students received their course certificates, and annual awards. The awards for Best Collection were presented to ajrakh artisan Vasim Khatri and bandhani artisan Taina Khatri. The Best Collection award is chosen to honour the student's body of work that is most cohesive in look, and best follows the chosen theme and colour palette. Vasim Abbbas Khatri, ajrakh printer from Ajrakhpur, received the award for his collection 'Soneri Pal-Golden Moment'. He created his own unique blocks for the collection of saris, stoles and dupattas, many using different types of textures, and an unusual soft palette of golds, browns, and light blues with black, all made in natural dyes.

Tainabanu Abdulaziz Khatri, bandhani artist from Bhadli, received the award for her bandhani collection 'Gamdaai-Of the Village'. She created a collection of stoles and dupattas, with a village-based gown, with a whole new look for bandhani using a combination of minute and bold forms together-technically very challenging as it requires different artisans to work on a piece. Taina's colour palette was rich jewel tones suited for the work.

Krishna Velji Vankar, weaver from Sarli, received the award for Best Presentation for her collection 'City Life'. She created a collection of saris, stoles and dupattas with imaginative hand inserted motifs depicting city life from her village perspective. Abstract city skylines and traffic jams were juxtaposed with long-legged figures toasting while dancing in celebration. Krishna used the same jewel toned colour palette that Taina used, in a fresh bright way, inspired by her colour blanket.

The students, who were part of the SKV 2018 batch, were all praise about the institute and the kind of knowledge that they have gained in the process. "I'm usually in my workshop; I don't see the world. I came to SKV for exposure. The first two courses, Colour and Basic Design were difficult. After that, everything was easy!" said Vasim Abbas Khatri, SKV Class of 2018.