Time to Pick Up

A strong textiles manufacturing base puts India among the leading fabric producing countries in the world and sets up a perfect base for the industry to grow further. But there are some shortcomings too. Sanjay Arora and Priyam Pandit analyse the state of India's weaving sector.

India has the largest number of looms in place to weave fabrics, accounting for 64 per cent of the globally installed looms. After Independence, the weaving industry was seen both as an employment provider in large parts of rural India and a vehicle to protect cultural heritage. The Indian weaving industry has traditionally been one of the most prominent sectors of mass employment after agriculture and is the second largest provider of employment. There is a huge availability of the raw materials, continuous supply of economically affordable labour force and a huge domestic market to cater to; so, what is it that the industry needs to fulfil the $500 billion dream of the Indian textiles industry?

The weaving industry in India was traditionally made up of handloom weavers which supported the numerous types of costumes for men and women, saris and blouse and other clothing. 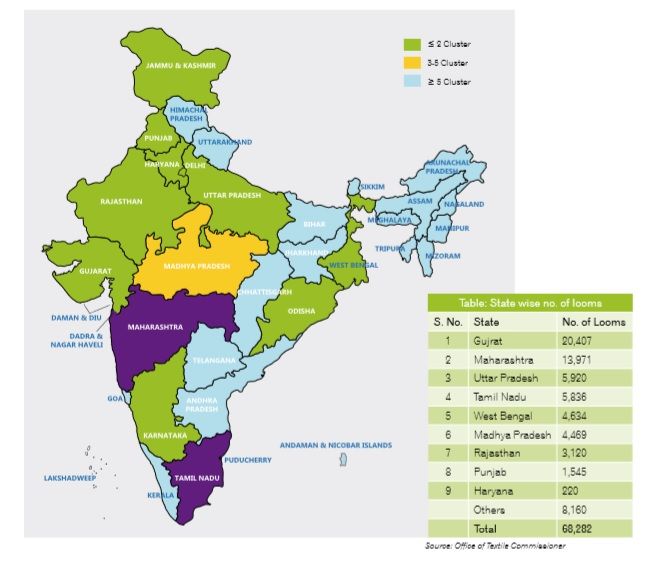 The Indian textiles industry is highly fragmented as about 95 per cent of the industry is unorganised. The predominance of micro, small and medium enterprises (MSMEs) are under pressure to modernise, expand and cut cost as there is increasing internal competition as well as from outside which is forcing individual units to look for economies of scale. A large number of units therefore are coming together either in the form of strategic alliances or becoming a part of the common workshed and cluster.

The organised loom sector contributes only 5 per cent to the total production, while the decentralised powerlooms produce three-fourth of the total woven fabrics, while the rest is made by the handloom sector. With an annual production of 49 billion sq m, India is among the world leaders in woven fabric manufacturing. Moreover, there has been a significant increase in the shuttleless looms in the country due to the liberal government policy for the powerloom sector. This has propelled the woven fabric exports of India to be worth $3.45 billion in 2017-18.

Clusters have been in existence in India for centuries and are known for their products at the national and international levels. These can be classified as industrial, handloom, and handicraft clusters. Textiles and apparel manufacturing is spread across India largely in cluster formats, mostly in the form of natural clusters. India has more than 6,400 clusters, of which around 50 clusters account for the majority of the fabric production in India. The major weaving states in India are Gujarat, Maharashtra, Madhya Pradesh, Uttar Pradesh and Tamil Nadu.

A strong textile manufacturing base puts India among the leading fabric producing countries in the world and sets up a perfect base for the industry to grow further. Also, various other factors have further contributed in supporting and increasing the demand of woven fabric in India. These include:

Cotton being the most abundant raw material in India is indispensable and accounts for around 73 per cent of the total fibre consumption in the country. Cotton is cultivated on more than 37 per cent of the total cultivable land in India, which has enabled India to become the largest manufacturer as well as exporter of cotton in the world. Also, India has a significant share in the global yarn spinning and is second only to China in production. It is considered the most modern segment of the entire textiles and apparel value chain in India. The total production of spun yarn in 2018 was estimated to be around 5,676 million kg with cotton occupying nearly 73 per cent of the share. Indian manufacturers have the capabilities to produce all kinds of spun yarns including blended and man-made fibre (MMF) yarns. 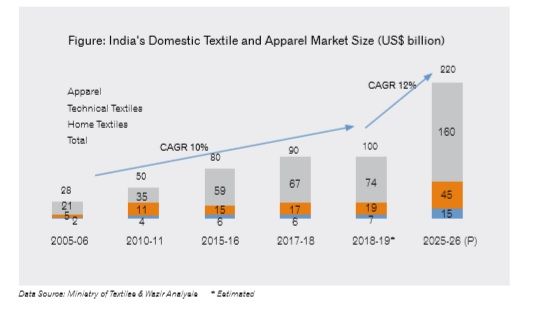 Growth in income: India's per capita income has seen significant growth in the last decade. The per capita GDP has grown at rate of CAGR 4.5 per cent since 1980. The growth since 2008 has been rapid at 5.4 per cent. Also since 2006, the number of households in India which earn $2,300-7,700 has increased significantly from 89 million households to 121 million households in 2016. For the apparel industry, this translates to an increase in the spending capacity of consumers along with an increase in the customer base. 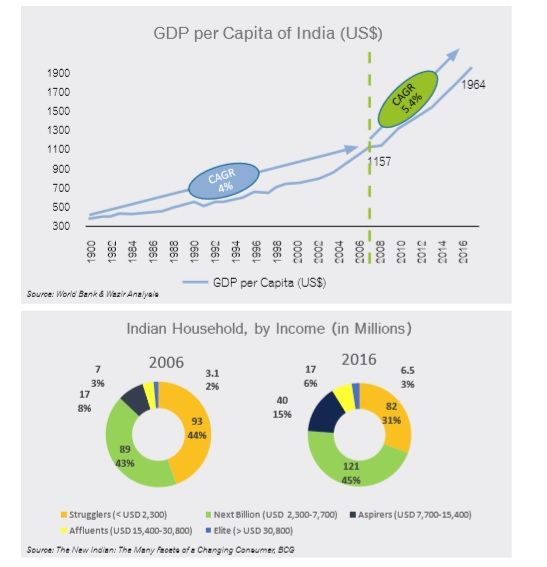 Fast fashion: Modern trends like fast fashion have led to an increased demand of economical apparel with high fashion content, which in turn has led to an increase in the frequency of apparel purchase. In the coming years, similar trends are expected to continue governing the apparel industry.

Hospitality business: The hospitality industry is a major consumer of woven products, with the use of products ranging from bedsheets and coverings to towels and curtains. India in the last two decades has seen a huge growth in the number of hospitals and hotels, which in turn has led to an increase in the demand of woven textiles.

Diversification: The consumption of apparel in India has not just grown in basic categories, but has also led to a diversification into newer categories-product categories like loungewear, eveningwear, sportswear and activewear. An average Indian wears at least 2-3 different pairs of apparel throughout a day, which is another major growth driver for the industry.

Fabric exports: India's woven fabric exports stood at $3,447 million in 2017-18, which has grown at 1 per cent CAGR since 2012-13. Cotton and synthetic woven fabrics accounted for a comparable share of roughly 37 per cent each in the exports, which signifies the competitiveness of Indian fabrics irrespective of the raw material. The Indian weaving industry looks not only to support the growing domestic demand, but also grow in exports.

Apparel exports: India's apparel exports have also seen a growth trend in the five years in lieu of reduction of China's increasing focus on its domestic market. Moreover, the cost of production in countries like Bangladesh and Vietnam have increased significantly in recent years as compared to India. This has presented India as a more economic sourcing destination for international buyers and has resulted in an increase of apparel exports.

Home textile exports: The emergence of the home textiles category has led to a growth of their exports from India reaching $5 billion in the year 2017-18. Home textiles exports are expected to reach $14 billion by 2025-26, growing at a CAGR of 14 per cent.

However, there are a few shortcomings or weaknesses of the industry.

India's weaving industry has the potential to continue growing in size and strength if the above shortcomings are worked upon. Capacity-building and investing in larger units: Even though the Indian spinning industry is considered one of the most modern in the world, the weaving sector lacks the technology and structure to make it globally competitive. For an industry to be globally competitive, the structure of the industry plays a vital role in defining the growth of the industry. As mentioned earlier, only 5 per cent of the weaving industry falls under the organised sector and contributes only 5 per cent to the total production.

Capacity-building and investing in larger units: Even though the Indian spinning industry is considered one of the most modern in the world, the weaving sector lacks the technology and structure to make it globally competitive. For an industry to be globally competitive, the structure of the industry plays a vital role in defining the growth of the industry. As mentioned earlier, only 5 per cent of the weaving industry falls under the organised sector and contributes only 5 per cent to the total production.

The industry should take the advantage of the lucrative investment policies offered by various Indian states for the expansion of their operations.

Process development and product innovation: India is a destination for low-value and traditional fabrics and lacks the technological and design innovations. Countries like China and Taiwan are known for their value-added fabrics, manufacturing capability of which India currently lacks. To change this perception, Indian manufacturers need to integrate the role of designers into the manufacturing for research and development of newer products, instead of replicating western designs. Currently, only a few major manufacturers take the services of textile designers while developing their products.

Trends that are shaping the manufacturing globally are:

Manufacturing excellence is the most effective solution for Indian woven textile manufacturers to cater to the buyer demand and at the same time adapt to the modern dynamics of the manufacturing industry. With the ever increasing raw material, wages and power costs, a modern approach is required. 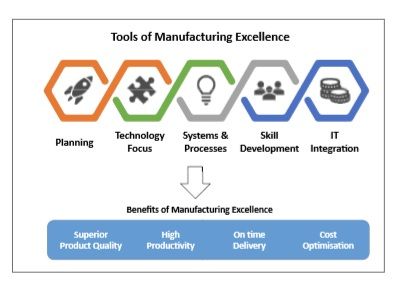 Manufacturing excellence includes proper forecast and planning of the demand. It also includes capacity planning and balancing, and machine allocation.

Technology focus includes focus on maintenance and introduction of newer technologies for effective cost-saving measures. For a weaving unit to function properly, well defined standard operating procedures (SOPs) need to be defined. A proper sustenance of these SOPs could help maximise the bottomlines at no extra cost to the company. Although, weaving doesn't require much human intervention, a highly trained staff will be efficiently able to deal with breakdowns. A skilled staff will also help in executive preventive maintenance of the machines.

Finally, for the tracking of all the systems and processes, a connection between all the entities of the manufacturing system is required. This much needed connection is provided by systems like management information systems (MIS) and enterprise resource planning (ERPs) software. A proper integration of these systems will enable the management to monitor the production round the clock; return real-time production data; systematic data collection and analysis; timely prediction of failures and delays.

Although, the Indian weaving industry faces a few challenges, the solutions to these are basic and structural. The industry is expected to continue growing at a steady pace in the coming years and to support this growth, it needs to focus on investing structurally and creating economies of scale. Also, the industry should emphasise on updations of technologies and optimising systems. Such emphasis could be provided through the adoption of modern practices like manufacturing excellence.

Manufacturing excellence is the key to success for existing players and for new companies also to produce world class quality with minimum cost of production. Finally, the industry should focus on treating the textiles industry alike the service industry. The stakeholders in the industry should go beyond their responsibilities in providing the buyer with a flawless experience, which would help in making Indian weaving industry even more competent globally.