India's largest exported product group is apparel, which contributed 48 percent of the industry's exports. It is followed by home textile and made-ups altogether with a share of 14 percent. Fibre and yarn together registered the highest growth rate in all product groups. Indian textile and clothing export industry relied more on markets such as EU and the US with export shares of 19 and 18 percent respectively followed by UAE, China and Bangladesh.

India stood at the 2nd rank in the list of textiles and apparel exporter all over the world with a share of 6 percent. In 2018, India's total textile and clothing export was US$ 37,148.05 million. India significantly targets the US, EU, Bangladesh, UAE, UK and China for the textile and clothing exports. Currently, the domestic consumption of the India contributed for 70 percent and exports 30 percent. The abundance of the raw material and skilled manpower with favourable government support through trade policies and trade agreements would further increase its market share and competitiveness globally.

Now India is focusing on the Latin America, a new emerging and potential market for textiles and clothing along with Africa and Southeast Asia. Latin American countries were initially very much dependent on the EU and the US for exports. But now they are also looking for the new markets including major Asian economies.

Overall exports of Indian textile and clothing to the Latin American countries have shown steady to a decline in trade from 2014 to 2018. The Indian textile and clothing exports was US$ 1838.67 million in 2014 and declined to US$ 1751.26 million in 2018 due to decreasing apparel and fibre exports amid downward revision in export incentives under the GST regime. Also, in recent years, India cotton fibre exports to Brazil showed the upward trend. It is expected to show the growth in the upcoming future as the considerable stability in the GST regime and ongoing Sino-US trade war. It is anticipated to grow at CAGR of 12 percent to US$ 2539.71 million by 2021. Indian fibre, home textiles, fabric and yarn exports are expected to grow with higher rates to emerging economies as compared to the major economies such as Brazil, Mexico and Argentina.

Initiatives from the Indian government to boost the exports

Indian government has taken multiple initiatives to enhance export of textile and clothing products to world with special package for garments and made-ups sectors. It includes labour law reforms, Rebate of State Levies (RoSL), additional incentives under ATUFS and relaxation of Section 80JJAA of Income Tax Act. Merchandise Exports from India Scheme (MEIS) rates have been increased 2 to 4 percent for apparel and 5 to 7 percent for made-ups.

Interest equalisation rate had been enhanced for pre and post shipment credit for the textile sector from 3 to 5 percent w.e.f. 2nd November 2018.

The following schemes have been implemented to boost the textile value chain.

India's textile and clothing exports to Latin America (US$ Million) 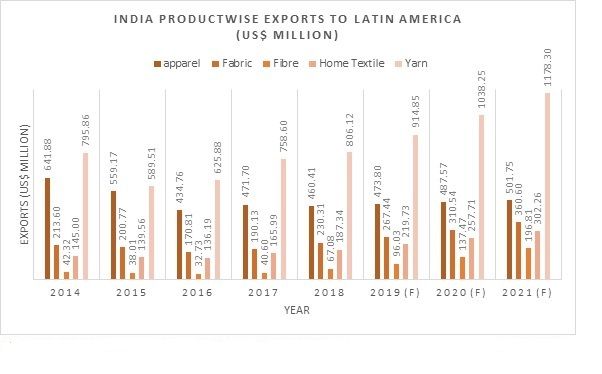 India's textile and clothing imports from Latin America (US$ Thousand) 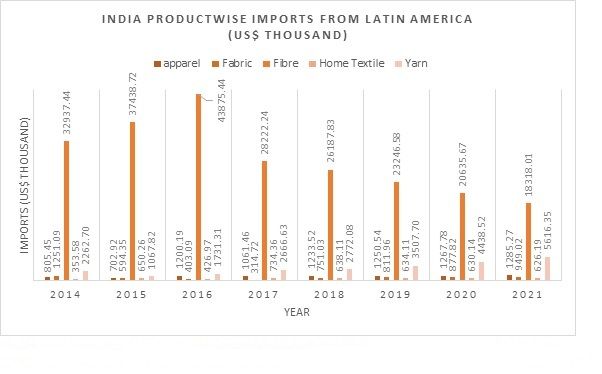 Indian textile and clothing exports to Brazil (US$ Million)

India's textile and clothing imports from Brazil (US$ Thousand)

Overall Indian textile and clothing imports from the Brazil was very high in the year 2015 and 2016 and hovered at US$ 19154.96 thousand and US$ 13970.11 thousand respectively. It gradually came down year over year and dropped to US$ 3990.62 thousand in 2018 with a significant drop of 45 percent over the previous year. Fibre imports accounted for approximately 90 percent of the total Indian textile and clothing imports from Brazil which is expected to show the downward trend in the upcoming years and projected to drop to US$ 1734.86 thousand by 2021. 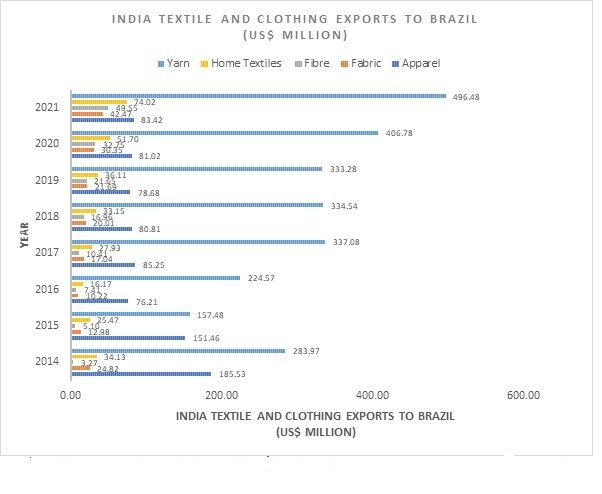 Now Brazil is placed at the 9th (DGCI&S) position in the top ten textile and clothing export destinations for India and contributed approximately 2 percent (DGCI&S) of the overall textile and clothing exports from India in 2018. Fibre exports from India to Brazil was growing with a higher rate. But recently it is facing a difficulty in cotton exports due to sharp increase in the fibre prices over the last six weeks. The price of standard Shankar 6 variety of cotton jumped more than 10 percent. According to Cotton Association of India (CAI), India's cotton production will fall during the current season due to crop damage in major fibre producing states including drought-hit Maharashtra and Gujarat. Also, appreciation of rupee further affected the prices. As reported by CAI, estimated cotton crop for 2018-19 dropped to 32.1 million bales from the previous estimate of 32.8 million bales made in March.

Brazil is one of the largest importers of polyester filament yarn from India. Brazil approximately imported 27 percent of total Indian polyester filament yarn export. In the FY2018-19, Brazilian cotton crop had hit a record in terms of production, driven by increase in crop area, according to Centre for Advanced Studies on Applied Economics (CEPEA). Hence again Brazil became the fourth largest cotton producer in the world same as previous year. 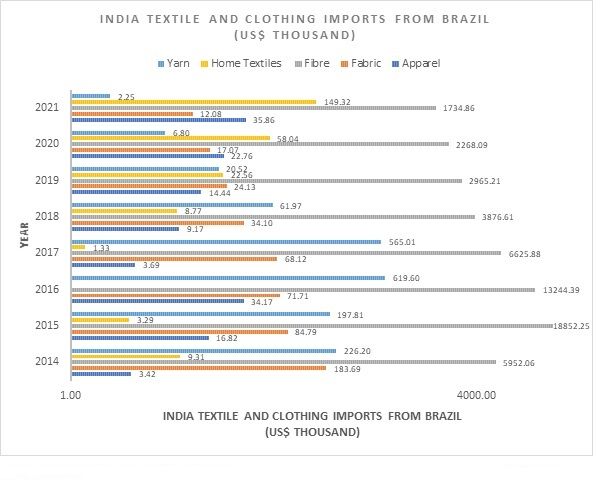 India's textile and clothing exports to Mexico (US$ Million) 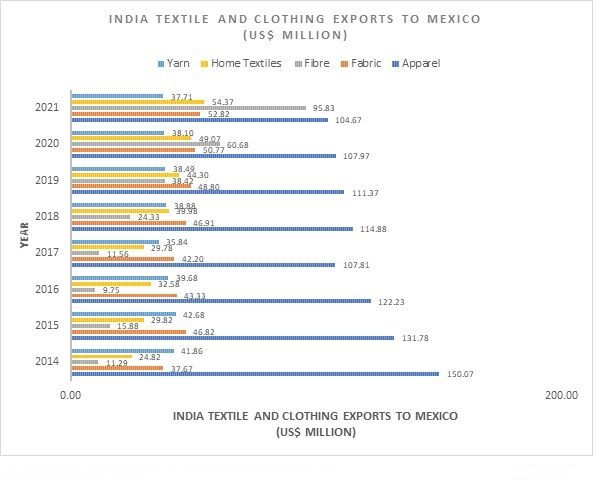 India's textile and clothing imports from Mexico (US$ Thousand)

Overall Indian textile and clothing imports from Mexico have shown the continuous increase from 2015 to 2018. The import was US$ 1487.18 thousand in 2015 and reached to US$ 3463.79 thousand in 2018 with the CAGR of 32 percent. It is anticipated to grow at CAGR of 12 percent to reach US$ 4916.01 thousand in the year 2021. Fibre and yarns accounted for approximately 85 percent of the total textile and clothing imports from Mexico. Fibre and fabric import are expected to grow at higher growth rates with CAGR of 31 and 21 percent respectively.

The recent threat announced by the US President to increase the import duties from 5 to 25 percent on several products imported from Mexico including textiles and clothing which was cancelled at the last minute, may affect the Indian exports of textile and clothing exports to the Mexico. As the US is Mexico's largest textile and apparel export destination, it may find out other regions to export including India. This may boost the textile and clothing imports in India from Mexico. 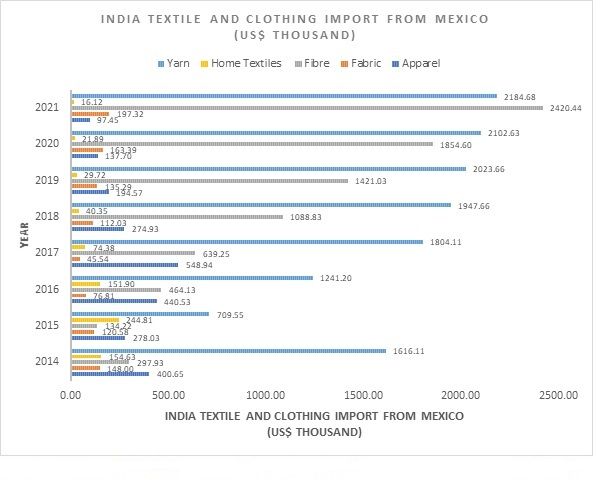 Indian textile and clothing exports to Colombia (US$ Million)

In order to enhance the bilateral trade between India and Colombia from the present level of approximately US$ 1.5 billion to US$ 10 billion by 2030, India and the South American nation, Colombia is going to finalise the terms of reference of Partial Scope Agreement.

Some Indian companies are looking for investment in Colombia in near future. India also has a growing share in textile fabrics and accessories to make the Colombia textile sector more attractive and competitive. Indian cotton yarn is the major contributor to the Colombian textile and clothing industry. 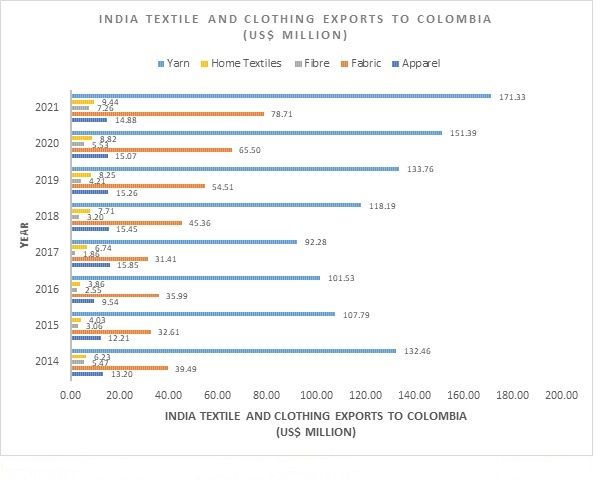 Indian textile and clothing exports to Peru (US$ Million)

To promote the bilateral trade between the India and Peru, both the governments are working on the free trade agreement between the nations. 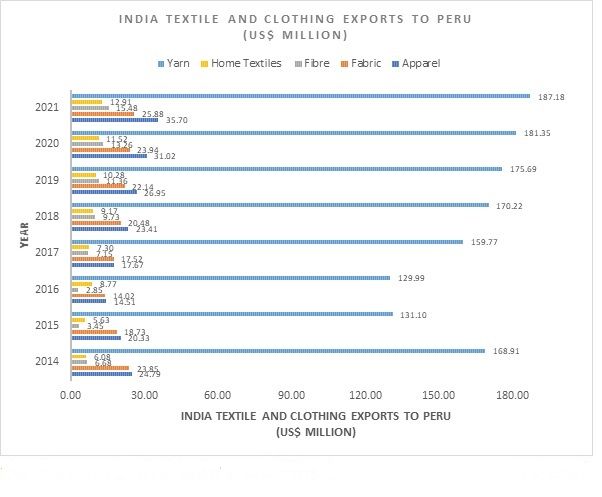 Recently, the 4th round of negotiations was held in the month of March 2019 at Lima, Peru. This trade agreement favours the market access for goods, trade in services, movement of professionals, investments, dispute settlement, technical barriers to trade, trade remedies, rules of origin of goods, customs procedures and trade facilitation. Both the countries are focusing on the significant reduction or elimination of the existing duties on major goods traded between them apart from relaxing norms and rules to promote trade in services and increase bilateral investments.

With growing uncertainties in the existing trade between India and its trade partners including the US and Europe, India is developing new markets such as Africa, South America and Central Asia. According to The Federation of Indian Export Organisations (FIEO), Peru holds huge export potential for Indian exporters. Peru placed at the third position among export destinations for India in the Latin America and Caribbean (LAC) region. The bilateral trade between the nations increased to US$ 3.13 billion in 2017-18 from US$ 1.77 billion in the previous fiscal. Among the top ten commodities that India exports to Peru include cotton yarn and fabrics.

Some Indian companies are also looking at Colombia as a manufacturing destination due to the trade advantages. Peru has established 19 free trade agreements with 55 main countries and economic blocs including the US, China, Canada, EU and others. Columbia also has highly qualified personnel throughout the textile value chain.