World's First Digital Haute-Couture Auctioned and sold on Blockchain for $9,500

The world's first First 'Digital Haute-Couture' is sold on blockchain. Browse, buy, and wear digital fashion on the blockchain. 'Iridescence' is the first digital haute-couture dress ever auctioned for a charity and sold for $9500 equivalent in cryptocurrency, in support the 'Foundation for Art and Blockchain charity'.

The virtual dress was designed by The Fabricant - a Dutch startup self-titled digital fashion house. The startup has specialised in photo-real 3D fashion design and animation. The 'Iridescence' dress was created from a 2-D computer-generated pattern turned into a 3-D model, with the help of a 'techgnosis' filter. 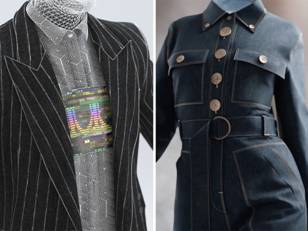 For promo and other social media-related activities, the virtual dress was worn by Johanna Jaskowska, a French artist who recently collaborated with Instagram in the development of digital facial filters.

Finally, the dress was auctioned/sold by Dapper Labs on the Ethereum blockchain, at the latest Ethereal Summit which took place in New York.

The project's main aim was to bring more artists on the blockchain and hopefully put the foundation of a new sector of digital-only clothing, with little hope to find a buyer for the digital garment.

And yet, there were lots of biddings and an anonymous buyer which now has 28 days to send in a photo for the virtual dress to be applied to. Known for its vanguardist views towards humanity and fashion, 'The Fabricant' team has promoted the event via their Instagram account with mind-bending questions regarding the impact of digital fashion on the future of human construct such as:

"What does identity mean when there are endless bits and bytes to express it? Our bodies are becoming fluid; we are moving into a non-dual operating system. Intrinsic new patterns are being shaped by systems that are closer to our nature by evolving rather than being controlled by a central power."

However, the event didn't go without criticism as the world of Reddit was very quick at posting:

"Here is an unreal garment, sold for unreal money."

Others readers took to Instagram to answer directly to the startup’s promo messages:

“Dreaming at the possibilities of a body freed from its physical restraints.”

“Doh, when you don’t have a body you don’t need fashion.”

Nevertheless, Johanna believes that when (and if) fully adopted, the Augmented Reality technology could potentially become the most powerful form of visual art, used in fashion to express and enhance human beauty.