Traditionally developed as 'the principle of the emancipation of animals from the exploitation of man', modern veganism has been growing and expanding. It has reached practically every corner of every high street, broken into the meat industry with plant-based burgers and sausages, and has become increasingly synonymous with responsible and environmentally-conscious living.

In fact, the United Kingdom's vegan population is projected to skyrocket by 327 per cent by 2020.1 According to a survey by UK comparison site Finder.com, the number of British vegans will rise to 2.9 million within six months. A growing vegan population has accompanied a growing vegan mindset. As such, it extends far beyond the parameters of dietary requirements. Vegan living has changed the way we live, learn and play.

While vegans do not eat meat or animal byproducts as an expression of their respect for the autonomy of all animals, many vegans extend this practice across all facets of their lives. According to a 2017 report by India- and US-based market research company Grand View Research, the global faux leather market is set to hit $85 billion by 2025, with many big names such as Stella McCartney pledging to go leather-free. Many vegans and non-vegans alike strive for home renovating and decorating solutions free from animal byproducts.

We certainly do not eat furniture, so what exactly makes vegan design? In the broadest of senses, it can include anything from plant-based materials for upholstery to synthetic mimics of natural materials. Vegan interior design options can be beneficial to all and are of special importance to those concerned about the welfare of animals and the health of their home and family.

The practice of interior design, in general, is to enhance the space within a building for those who inhabit it. Strategies are used to manipulate our feelings, promote notions of health and well-being and improve our lives. Vegan interior design does all the above and pays special attention to the lives of people and animals alike. We can learn from nature to build resilient design strategies.

With the swarm of vegan alternatives in pretty much every industry, it is no surprise that it has caught the attention of creative thinkers and designers. Its only natural to anticipate the gravitation towards vegan interior design.

In January 2019, the Natural History Museum of Los Angeles opened its doors to the first-ever vegan fashion show. Dedicated to elevating vegan fashion everywhere, the show was a tribute to animals and an ode to the end of animal exploitation in all forms. We can only expect that as alternatives to animal products like leather and wool become more available, vegan interior design will go mainstream. But, what should this look like?

Traditionally, leather has played an important role in interior design. From furniture to gilded wall art, leather has been dubbed a luxury and robust material that has adorned our interiors for thousands of years. However, times are changing, and it is forecast that the products we use to enhance our interiors will soon get to the stage where food is now. That is the vegan phenomena. 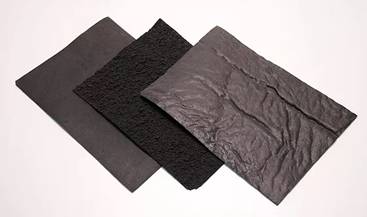 Designers and researchers have been working to find vegan alternatives to leather in a bid to tackle some of the environmental and ethical impacts of traditional leather production.

Leather, like sausages, traditionally comes from animals. But it does have alternatives. Designer Don Kwaning has developed lino leather to provide a vegan substitute for leather upholstery. It beautifully emulates the texture of leather for interior and furniture design.

It is developed from lino, the compound material mostly associated with affordable hardware flooring. The material is double-sided, each with the same stunning finish.  To make for a more natural-looking material, the colours of lino leather are of wood-flour, which is also a key component of the material itself.

This new ecological substitute for leather is essentially a compound of plant-based oils and resins mixed with minerals and set onto a textile backing, and looks and feels just like leather. There are officially no excuses to turn to animals for their skin. Another synthetic leather material that comes pretty close to the real is Piratex. This material is made from wasted leaves of pineapples.

Bringing it all together 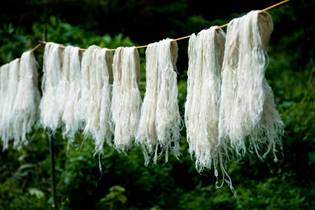 The world's first vegan hotel suite set up in Hilton London's Bankside has totally omitted the use of leather, wool and feathers throughout its interiors. Adorned in exclusively plant-based materials, this suite has spectacularly demonstrated that veganism is more than a dietary preference and that it influences a much wider lifestyle choice.

Throughout the suite, most surfaces are upholstered in Pinatex. The use of this pineapple-based material serves as a subtle nod to London's long history of trade. When pineapples first arrived in the capital, they were sold in Borough Market, a few minutes' walk from the hotel.

A notable feature of a good hotel is its collection of pillows. In this hotel, traditional feather stuffing has been traded for organic buckwheat, millet seeds and bamboo fibres. As

for the luxury carpets you might expect to find in a Hilton, cotton has been used instead of wool.

To prove the viability of 100 per cent vegan living, this suite has also ensured that all snacks, stationery, and cleaning products used by housekeeping staff are free from animal cruelty. From fruit-skin compresses to plant-based hotel suits, veganism is well and truly breaking into interior design. We have been shown by leading designers that animal-friendly design meets all the criteria for stunning, original and creative interiors.