Sustainable Fashion Report - The Social and Environmental Impact of Fashion

Sustainable Fashion report - Fashion consumption has become a severe problem that can no longer be ignored. So much so, that you might want to think twice before you load up with the latest creations, at the mall.

According to this sustainable fashion report, four companies, in particular, have failed to disclose the toxic chemicals they use to manufacture apparel and accessories. The four brands were: Forever21, J.Crew, Urban Outfitters, and Carter's.

"These four labels have no policies about the use of toxic chemicals. At least, not publicly available and such lack of transparency is a serious problem," says Caroline Chen, the Campaign Manager at GA's.

"It's science now; the use of toxic chemicals in textile manufacturing is bad for both workers and the planet. Moreover, as some of these chemicals remain in the fabrics, they could be harming the end consumer as well," she added.

"These four labels have no policies about the use of toxic chemicals. At least, not publicly available and such lack of transparency is a serious problem," says Caroline Chen, the Campaign Manager at GA's.

"It's science now; the use of toxic chemicals in textile manufacturing is bad for both workers and the planet. Moreover, as some of these chemicals remain in the fabrics, they could be harming the end consumer as well," she added. 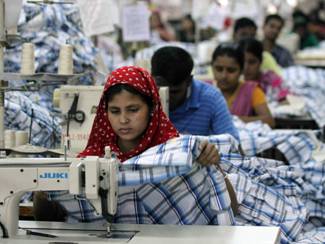 Similarly, Carter's insisted that it has an internal list of restricted chemicals; however, it is not for the general public. "Fantastic! Then, how can we know which chemicals are present in Carter's apparel designed for infants and children?" argued Green America's representative.

It's essential to note that this research did not test apparel for traces of toxic chemicals. The study looked at whether companies had sound, publicly-disclosed sustainable management policies in place, and if these companies were acting to eradicate toxic compounds from their supply chain.

There's no secret that fashion manufacturing is a filthy business. Over 8,000 chemicals are used throughout the textile-making process. Pesticides for cotton and other fibres, bleaching compounds, dying solutions, all used to wash fabrics or print patterns. Overall, the amount used is estimated at 43 million tons of chemicals every year.

In fact, the Swedish Chemicals Agency examined 2,400 chemicals regularly used in textile manufacturing and found that almost all were toxic. Toxins such as polyfluorinated chemicals used in waterproofing clothing are known to affect liver health and disrupt hormonal functions. Heavy metals used in dying are carcinogenic and damaging to your nervous system. Azo dyes, the most used dyes, release carcinogenic compounds in the air during the dying process.

And even when properly managed in the manufacturing process, these chemicals end up in rivers and the ocean, harming marine ecosystems, polluting drinking water, slowly destroying the planet. Moreover, almost 20 per cent of the overall industrial water pollution is attributed to textile manufacturing.

For example, synthetic indigo, used to dye denim jeans blue, is a chemical cocktail that includes formaldehyde, a known toxin to the environment and people.

In China alone, synthetic indigo pollutes over 70 per cent of the rivers and lakes. Over 2.5 billion gallons of wastewater is contaminated by the textile and dye industry, according to the watchdog group China Water Risk.

And if marine life matters little to you, then know that workers suffer the most from the cocktails of chemicals used in textile manufacturing. Most of them end up with cancer and reproductive health problems.

And again, if you don't care about workers either, then bear in mind that the clothes you buy and take home with pride, contain residual chemicals that affect you directly, as a wearer. Fashion has become a severe problem.

Among the labels with the best marks were North Face, Nike, Gap, and Target. These companies provided detailed policies about their chemical management and actively shared their progress towards a more sustainable industry.

However, possibly the most disturbing finding was that several clothing companies for children had low marks.

"Children are sensitive to chemical irritants and toxins, especially during their development and growth and seeing Carter's and Children's Place ignoring this, is a serious issue we have to tackle," said Green America's spokesman.

"We are calling on Carter's to adopt a publicly-available sustainable policy that protects the tiniest humans who wear their clothes. It must start right now by disclosing the chemicals it is using in its supply chain," the spokesman continued.

Forcing companies to clean up their acts is not easy, and the first step is getting them to track by reporting on the toxic chemicals they are using.

Without a doubt, we have a long way to go before we remove all toxic chemicals from the fashion industry. But, by being transparent and having a healthy chemical-management and sustainable policy in place is the first step of getting there.